One of the features I really like about RabbitMQ is its queue routing. Its flexibility allows you to do interesting things without much of a hassle. But before I dig deep into RabbitMQ's routing capabilities, I would like to mention some concepts.

RabbitMQ uses not only connections, but virtual connections called channels. The idea of channels is to introduce multiplexing in a single connection. A small system could establish only one connection with RabbitMQ while opening a channel for every single execution thread e.g: 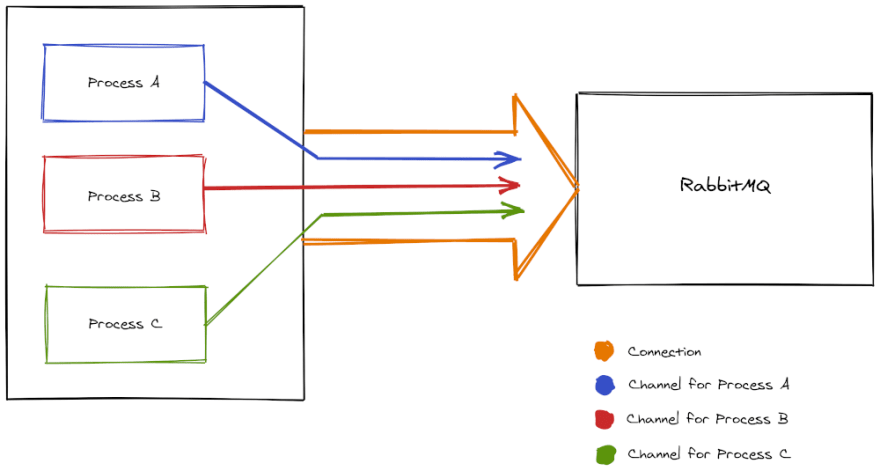 The rule of thumb would be to use:

With a normal RabbitMQ setup, we need to deal with:

An exchange is a message router. Every queue attached to it will be identified by a routing key. Typically, routing keys are words separated by dots e.g. spain.barcelona.gracia.

It's easier to see these concepts with an image example:

In the previous image:

Handling RabbitMQ's complexity might be intimidating. Fortunately, Yggdrasil for RabbitMQ generalizes the complexity in order to have a simpler API.

The biggest difference with previous adapters is the channel name. Instead of being a string, it's a tuple with the exchange name and the routing key e.g:

A subscriber would connect to the exchange amq.topic using the routing key logs.* as follows:

Note: The exchange must exist and its type should be topic. The exchange amq.topic is created by default in RabbitMQ.

Then a publisher could send a message to the exchange amq.topic using logs.info as routing key:

Finally, the subscriber would receive the message:

Additionally, the subscriber can be written using the Yggdrasil behaviour:

Though it's possible to overcome this problem with exclusive queues, this feature is not implemented yet.