Explained in a video lesson on Egghead

Have you ever written a library in JavaScript or TypeScript? Are you planning to do it? If so, you must try Typescript library starter, a starter kit that will make easy to get started while providing all features you know to write a library in Typescript.

Writing a library or project always requires some work:

Typescript library starter solves all of that and more, plus:

Let's see how easy is to use it.

A prompt will show up asking your library name:

When you do so, it will configure the project for you based on the library name and your git config. It re-inits the git directory, configures rollup, package.json and your entry files (both src and test).

See it yourself! Try running npm t, it will run a sample test. Or run npm run build, it will create a dist folder with the bundle, typings file and documentation.

See all the commands available on the repo Readme

Now start coding. You'll see when you make a commit, your code is automatically formatted! That's thanks to Prettier :)

We need to do some previous steps. First, make sure you've created an account on:

Also, make sure you've set the repository.url property on your package.json.

The script will setup 2 githooks: commitmsg and prepush. They're convenient, since semantic release works by following conventional commit messages.

At this point, you just need to install semantic release. Answer NO to the "Generate travis.yml" question, because it is already prepared for you.

From now on, better use npm run commit. It will show you a prompt which is very convenient for creating a conventional commit. Note that running git commit -a without the proper commit message will fail. 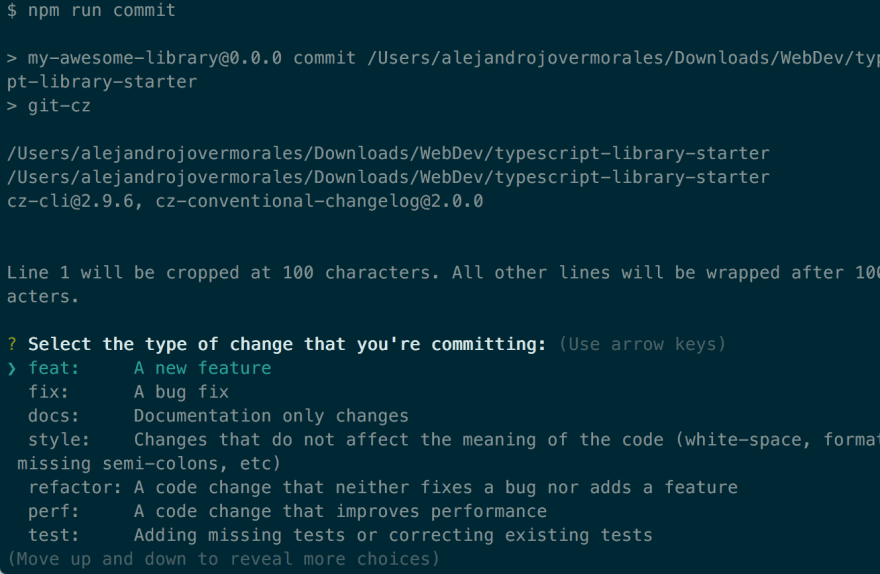 You'll notice that when you run git push, the exactly same command that Travis CI runs is run locally on your machine, so you can see early if the build will fail.

We haven't dived into any kind of configuration, but we were able to not only write a dummy library, but also make sure all quality steps (linting, testing, coverage) are asserted and that we can create bundles, builds, typings and all things needed for a TypeScript library.

Not only that, but also how to make maintainability easy by automating releases!

If you liked Typescript library starter, please give it a star. If you have any feedback, you can either open an issue or reach me at @alexjoverm

How to Fix the TypeScript intellisense template error in Vue

How to scan barcodes in your React.js application

Once suspended, alexjoverm will not be able to comment or publish posts until their suspension is removed.

Once unsuspended, alexjoverm will be able to comment and publish posts again.

Once unpublished, all posts by alexjoverm will become hidden and only accessible to themselves.

If alexjoverm is not suspended, they can still re-publish their posts from their dashboard.

Once unpublished, this post will become invisible to the public and only accessible to Alex Jover.

Thanks for keeping DEV Community 👩‍💻👨‍💻 safe. Here is what you can do to flag alexjoverm:

Unflagging alexjoverm will restore default visibility to their posts.