In computer science, functional programming is a programming paradigm -- a way of thinking about software construction based on a set of fundamental, defining principles.

The fundamental, defining principles that make up this paradigm are that the code:

When the computer is given specific steps in order to achieve a desired result -- telling the computer exactly HOW to do something.

This tends to be the pattern that developers follow most often. It is the way that, we as humans, are used to trying to solve a problem.

This is the way that functional programmers approach solving a problem. They focus on what results they need, rather than how the results are achieved. It is a different approach that can be hard to adopt at first, but can do significant things for your code. 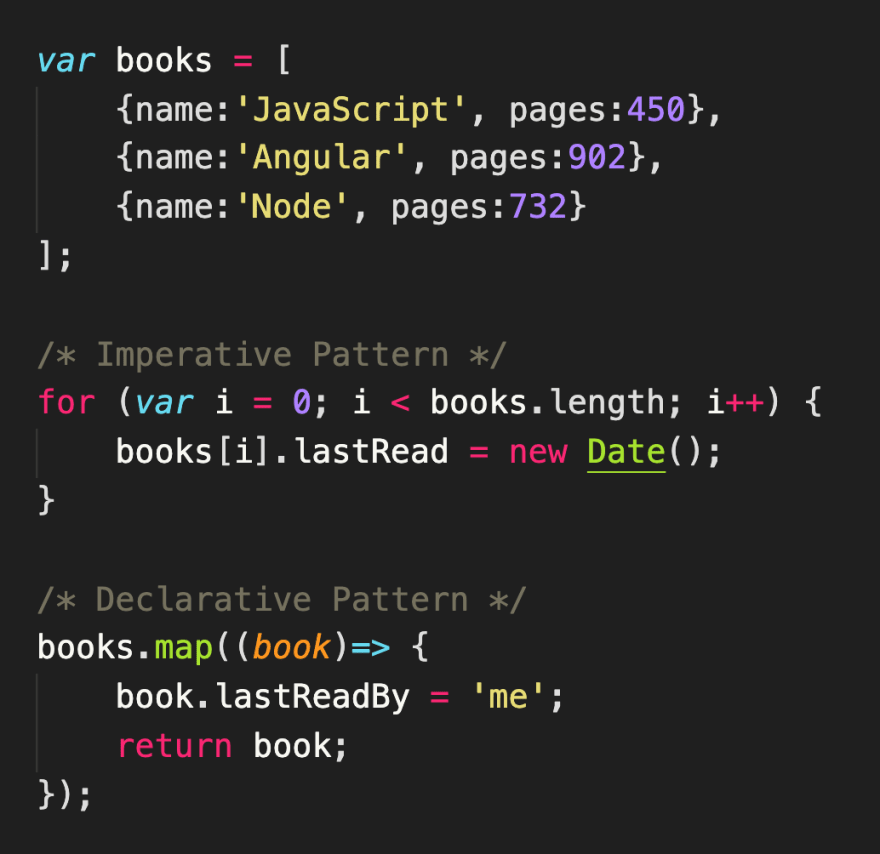 Both of these examples are adding new items onto each book object inside the books array.

The for loop example (Imperative Pattern):

It’s giving the computer the information to produce the desired result, but it is not telling it exactly how to do it. The .map() method behind the scenes is taking care of the actual operation.

They are also simple and reusable building blocks for your code, completely independent from outside state therefore immune to state related bugs, as well as being easy to move around, refactor, and reorganize within your code. Thus making your overall program more flexible and adaptable to future changes. 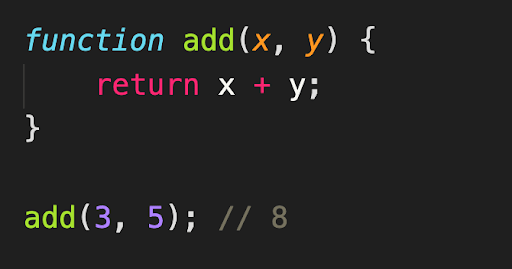 This is an example of a pure function. It accepts at least one parameter and returns a value. When it's given the values of 3 and 5, it will always return the output value of 8. It produces no side effects because the function relies on nothing except its input values. 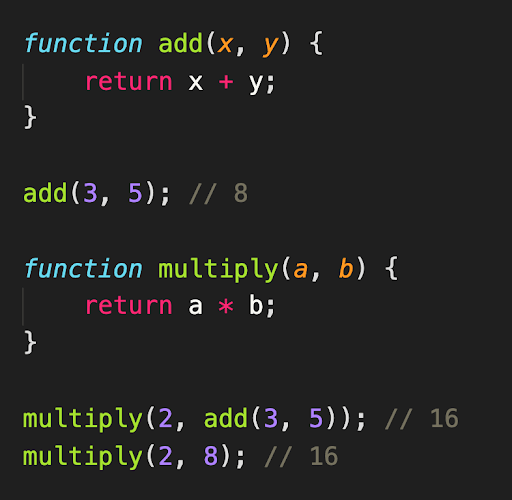 This example shows a pure function and more specifically how they can be referentially transparent.

Using both functions we could write this function call as the first call multiply(2, add(3, 5));. Which would first add 3 to 5, producing the sum of 8. That sum of 8 would be passed as a parameter to multiply() along with 2, to produce the value of 16 as the final output.

We could also change the add(3, 5) function call as a parameter to just the value of its output (8). This change still produces the output value of 16. This replacement didn’t affect the output of the function in anyway, which makes it referentially transparent.

Immutability and Side Effects

When an object cannot be modified in any way after it has been created.

The goal is to keep state and data from being shared or altered and solely keep it within the scope of each function, when possible.

There are no variable or loops, at least not how we are used to seeing them. Stored values are called variables because of history, but they are constants. Once x takes on a value, it is that value for life. They are usually local variables, so their lives are usually short, but while it is alive it can never change. Loops, on the other hand, happen through recursion.

One thing to keep in mind is that in JavaScript, the variable const doesn't necessarily equal immutability. const creates a variable name binding which cannot be reassigned after creation, however, it doesn't create immutable objects. You can't change the object that the binding refers to, but you can still change the properties of the object. This ultimately means that bindings created with const are mutable.

Recursion is when a function calls or refers to itself. This is used in place of traditional loops. Old values aren't modified during the looping, instead recursion uses new values calculated from the old ones. This allows constants and data to be modified as little as possible.

Recursion is like a flip book. Each instance would be like each individual page of the flip book. They are completely independent of each other, don't modify anything on any of the other pages, and putting each instance together gives you the final result.

There are three key features in a recursion function. 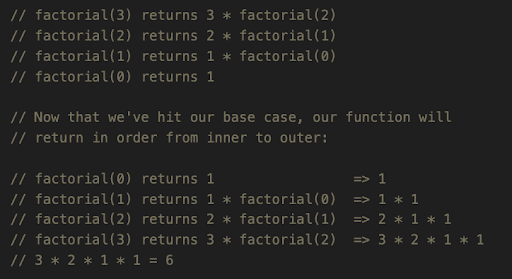 This example breaks down as follows:

Any application state changes that are observable outside the called function other than its return value.

Elements in your code that can cause side effects are:

Unfortunately, you can’t have a program or code base that is completely 100% free from side effects, but you can work to keep them contained and isolated within your code. This makes it easier to extend, refactor, debug, test, and maintain your code. It is also why front end frameworks encourage users to manage state and component renderings in separate, loosely coupled modules.

Shared State is something that will create side effects within your code if it is altered.

One reason for this is because it is impossible to know the entire history of every shared variable, especially if there are asynchronous calls happening within your code.

An example of this would be if there was a user object for your program that needed to be saved. The saveUser() function makes a request to the API on the server and while that is happening, the user changes their profile picture with the updateAvatar() function. This triggers a second request with saveUser(). Since these are async calls, if the second call is received first, when the first call (now outdated) call gets returned, the new profile picture will get deleted and replaced with the old one.

This is an example of a race condition, which is a common bug with having shared state. During that entire process there are times when you don't know what's happening to the user object. Therefore, sometimes you receive a result you weren't expecting.

Another reason is because when the order of the functions changes or they get moved around it causes a cascade of failures within your code. 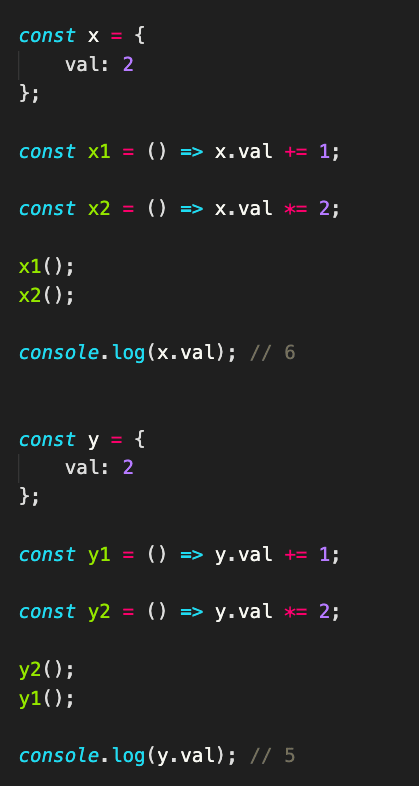 The second half is the exact same values and functions as the first, however the two functions get called in reverse. It starts with the value of 2, then it multiplies that by 2 to get 4, and then it adds 1 to that. This gives you a final result of 5.

Once unpublished, this post will become invisible to the public and only accessible to Amanda Hasenzahl.

Thanks for keeping DEV Community 👩‍💻👨‍💻 safe. Here is what you can do to flag alhasenzahl:

Unflagging alhasenzahl will restore default visibility to their posts.