Choosing a state management library to manage and handle a global state in a React app can be tricky and time-consuming. A lot depends on the scope of the React app and there are many options available.

With the adaption of React Hooks API, one such option is to use a combination of useReducer hook and the Context API. In this post, let's take a look at how to manage global state in a React app using both of them.

To take full advantage of this tutorial, or run along with the example, please make sure you following installed/access to in your local development environment.

If you are not familiar with React Hooks, I recommend you to go through the in-depth post on React hooks here.

With the release of Context API as well as Hooks API, implementing a global state is possible without installing any additional state management library. The useReducer hook is a great way to manage complex state objects and state transitions. You may have seen or used useState to manage simple or local state in React apps.

The useReducer hook is different from useState. The main advantage it has over useState is that covers the use case when there is a need of handling complex data structures or a state object that contains multiple values. It updates the state by accepting a reducer function and an initial state. Then, it returns the actual state and a dispatch function. This dispatch function is used to make changes to the state.

To get started, create a new React project by executing the following command in a terminal window:

To focus on the main topic of this tutorial as well as to give the demo app a nice look and feel, let's use pre-defined components from Reactstrap. It provides Bootstrap 4 components that are based on Flexbox and useful to handle the layout of a web app. To get started using Bootstrap in a React app, install the following dependencies:

After installing these dependencies, open the React project you created and open the file index.js. Add an import statement to include the Bootstrap CSS file.

That's it to set up Bootstrap in the current React app.

Start by creating a new file called GlobalState.js inside the src/ directory.

Let's use React's context API to create a Context provider that can is going to share the state across multiple components. You can think of this example as mimicking Redux' philosophy. Import the required statements.

Next, create an empty context for Expense and define an initial state object. This initial state is going to have one expense item present. This also helps to define a schema or data model for all other expense items (but do note that this for demonstration purpose in context to this post).

Then define a function called reducer. It is going to take two arguments, the current state and action. This reducer's job is to modify or update the state object whenever there is an action taken within the app by the user. One example of an action is a user adding an expense.

Next, define an ExpenseContextProvider that is going to behave like a store (as a store in Redux).

The useReducer hook allows us to create a reducer using the reducer function defined previously. The initialState is passed as the second argument.

Wrap the App with the provider

When the ExpenseContextProvider is wrapped around any component in the React app, that component and its children will be able to access the current state as well as modify the state object.

In this section, that's what we are going to do. Open, App.js file, and modify it as below.

In the next sections, let us create other components that are children to this App component. Create a components/ directory and then create three new component files:

Add the header of the app

In this section, let us define a presentational component called Header. It's going to be a simple jumbotron component from Bootstrap displaying the title of the app and the logo.

The uuid module is going to generate a unique id for each expense item in the global state.

Define a Form component that is going to access values from ExpenseContext using useContext hook.

Add the following initial state for name and amount using useState. Both of them are going to have an empty string as their initial value.

To update their values when a user starts typing, add the following handler methods. Both of these functions are going to retrieve the value from the corresponding field. The console statements are for testing purposes.

Lastly, to submit the form, there is going to be another handler method called handleSubmitForm. This method when triggered is going to dispatch the action to add the expense (ADD_EXPENSE). This is how the reducer function in the global state updates the state.

Lastly, add the following JSX to display the component.

In this section, let's add the List.js component to display a list of items from the current state object provided by the ExpenseContext. Open the file and add the following import statements:

All the components of the simple Expense Tracker app are complete. Now, let's run the app and see it as an action. On the initial render, the Rect app is going to look like below. 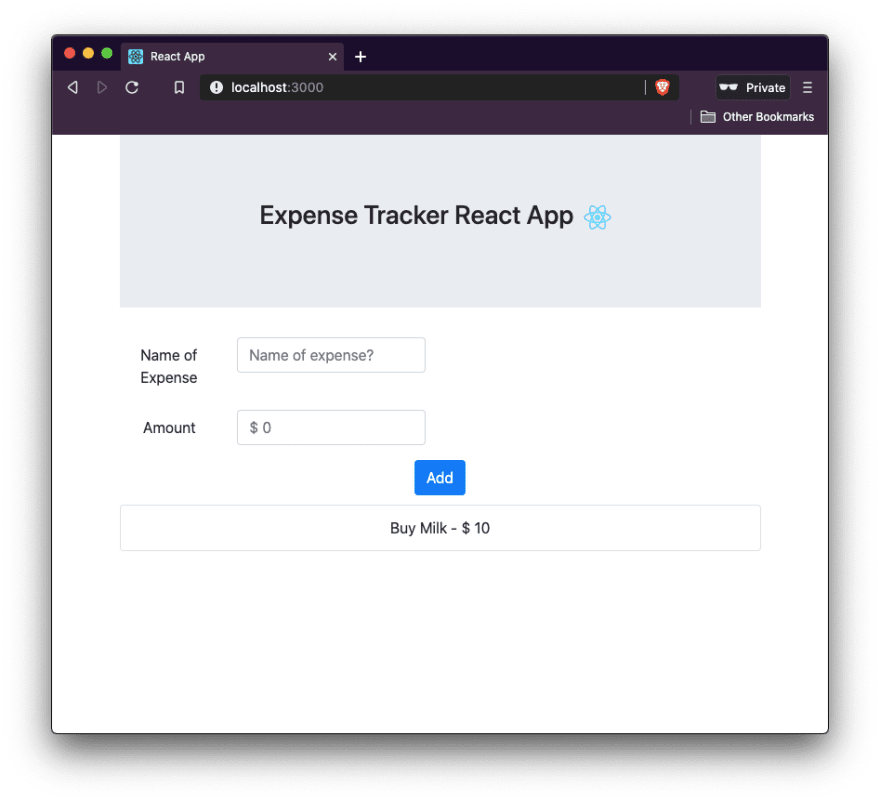 It is going to display one expense item that is defined as the object in the initial state. Try adding a new item in the list and see if the list updates and form gets cleared or not.

🙋‍♂️ You can find me at: Personal Blog | Twitter | Weekly Newsletter