React is an open-source JavaScript library that is used to form user interfaces. In this article we tend to discuss what it takes to build a React application on our local machine and understand all the folders and files that comes with the create react app tool.
Building a React project on our machine requires an elaborate workflow whether it is a single page or a multipage application. So an important question that should be asked is:

Why it is necessary to have this workflow and how to compose it?

Lets tackle the why part of the question first:

The above are the main reasons we need a workflow.
Now let's see how to achieve it:

Webpack is an example of a bundler that has a great advantage when it comes to eventually sending the divided files to browsers because some of these web browsers might not support the divided files and if they do, we cant just send all requests to these specialized files.

As you notice we have three dependencies in this project created by create React app.
You can also see that we obviously import React. Here we are using:
Latest version of React at the time I am writing the article.
ReactDOM: provides DOM-specific methods. We will only use the "render" method of the module in index.js to render our application in the DOM.

It has all the dependencies and sub-dependencies of our project.
In the package.json file we discussed only three dependencies including React, React DOM and React Scripts. More specifically, React Scripts have a lot of other dependencies made up of all the build tools that compiled the code and so on. You shouldn't modify anything in the node_modules folder.
The public folder: 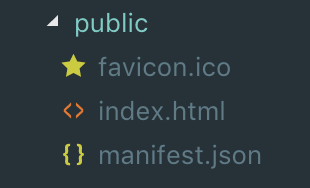 An interesting one, it's the root folder that gets dealt by the web server in the end. In this folder we have one significant file which is the index.html file. This file has a normal html page and it is the single html page in our project.

So this is the single page, where in the end our script files will get instilled by that build workflow. We can modify this file but we won't add any HTML code here.
I want to highlight this div here with the ID root:
<div id="root"></div>
It important because here where we will place our React application later.
In the HTML file you can import libraries such as CSS libraries and add meta tags.
Getting to manifest.json file:

This info gives information to the browser about your application. For example, this is required for mobile browsers so that you can add a shortcut to your web application.
Another interesting folder is the src folder: 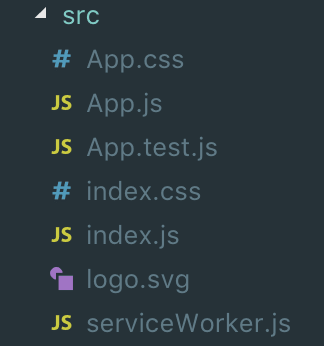 It possesses the files that we are going to work in which is the actual react application.
It has the index.js file:

This file access the root element in our DOM , the element with id root in our HTML file.

ReactDOM.render(<App />, document.getElementById('root'));
As you notice it renders our React application with the render method. Also there is a reference of App object that we imported from the App file.
import App from './App';
The extension .js (App.js) is omitted because it is automatically addressed by our build workflow.
Lets take a look at our App.js file:

Here we can see our first and only React component we have in the starting project.
Another file to mention is the App.css:

This file determines some styling we use in the App.js. However, the CSS styling does not only relates to the App.js file, it is global styling.
We also have an index.css file:

This file implements global styling and everything that should be used for some general set up as we can see here for the body of our application.
The registerServiceWorker.js file is essential to register a service worker. It pre-cash our script files and there is no obligation to configure anything there. You can also safely delete this file if you don't know or don't care about service workers.
Lastly the App.test.js file:

Essentially, it allows us to create unit tests for different components in our application.

To conclude, any programmer wants to code in an efficient way where he can avoid manual interference to create a convenient environment for coding. Having a build workflow is really important when it comes to building big React projects. Can you imagine having to learn every single one of these tools before being able to do anything in React?
Fortunately, the create react app tool made it more easier.

Did this article help you demystify the files and folders that come with create-react-app? Let me know in the comments section.

⛓ How To Join Two Arrays In JavaScript