It's a common task in NLP to either check a text against a pattern or extract parts from the text that matches a certain pattern. A regular expression or "regex" is a powerful tool to achieve this.

While powerful, regex can feel daunting as it comes with a lot of features and sub-parts that you need to remember.

In this post, I will illustrate the various concepts underlying regex. The goal is to help you build a good mental model of how a regex pattern works.

Let's start with a simple example where we are trying to find the word 'cool' in the text.

With regex, we could simply type out the word 'cool' as the pattern and it will match the word.

While regex matched our desired word 'cool', the way it operates is not at the word level but the character level. This is the key idea.

Key Idea: Regex works at the character-level, not word-level.

The implication of this is that the regex r'cool' would match the following sentences as well.

Now that we understand the key idea, let's understand how we can match simple characters using regex.

We can simply specify the character in the regular expression and it will match all instances in the text.

For example, a regular expression given below will match all instances of 'a' in the text. You can use any of the small and capital alphabets.

You can also use any digits from 0 to 9 and it will work as well.

Note that regex is case-sensitive by default and thus the following regex won't match anything.

We can detect special characters such as whitespace and newlines using special escape sequences.

Besides the common ones above, we have:

Regex provides a bunch of built-in special symbols that can match a group of characters at once. These begin with backslash \.

It matches any single-digit number between 0 to 9.

Notice that matches are single digit. So we have 4 different matches below instead of a single number 18.04.

It matches any whitespace character (space, tab or newline).

It matches any of the small alphabets(a to z), capital alphabets(A to Z), digits (0 to 9), and underscore.

It matches any character except the new line (\n). 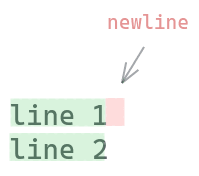 If you use the capitalized versions of the patterns above, they act as negation. 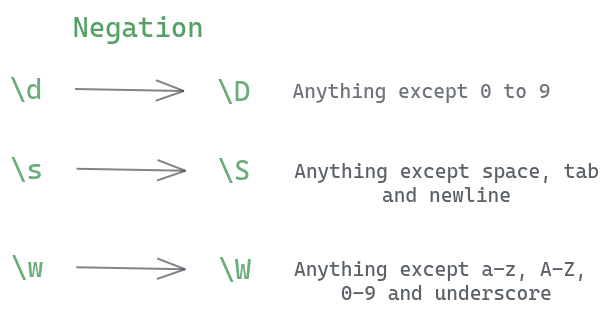 These are patterns starting with [ and ending with ] and specify the characters that should be matched enclosed by brackets.

You can also replicate the functionality of \d using the below pattern. It will match any digits between 0 to 9. 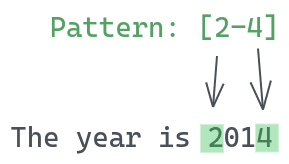 You can even use the special characters we learned previously inside the brackets. For example, you can match any digit from 0 to 9 or whitespace as:

Below, I have listed some useful common patterns and what they mean.

Regex also has special handlers to make the pattern only match if it's at the start or end of the string.

We can use the ^ anchor to match patterns only at the start of a line. For example:

Similarly, we can use the $ anchor after the character to match patterns only if it's the end of the line. For example:

Consider a case where we want to exactly match the word "Mr. Stark".

If we write a regex like Mr. Stark, then it will have an unintended effect. Since we know dot has a special meaning in a regex.

So, we should always escape the special metacharacters like ., $ etc. if our goal is to match the exact character itself.

Here is the list of metacharacters that you should remember to escape if you're using them directly.

Now that we can pattern match any characters, we could repeat things and start building more complicated patterns.

Using only what we have learned so far, a naive way would be to just repeat the pattern. For example, we can match two-digit numbers by just repeating the character-level pattern.

Regex provides special quantifiers to specify different types of repetition for the character preceding it.

We can use the {...} quantifier to specify the number of times a pattern should repeat.

For example, the previous pattern for matching 2-digit number can be recreated as:

You can also specify a range of repetitions using the same quantifier. For example, to match from 2-digit to 4-digit numbers, we could use the pattern:

When applied to a sentence, it will match both 4-digit and 2-digit numbers.

There should not be any space between minimum and maximum count For example, \d{2, 4} doesn't work.

Regex also provides quantifiers "*", "+" and "?" using which you can specify flexible repetition of a character.

Python provides a module called "re" in the standard library to work with regular expression.

To specify a regular expression in Python, we precede it with r to create raw strings.

To understand why we precede with r, let's try printing the expression \t without **r**.

You can see how when we don't use raw string, the string \t is treated as the escape character for tab by Python.

Now let's convert it into raw string. We get back whatever we specified.

To use re module, we can start by importing the re module as:

This function allows us to get all the matches as a list of strings.

This function searches for a pattern at the beginning of the string and returns the first occurrence as a match object. If the pattern is not found, it returns None. 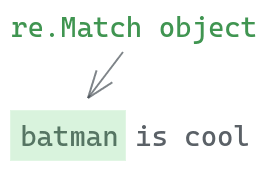 With the match object, we can get the matched text as

In a case where our pattern is not at the start of the sentence, we will not get any match.

This function also finds the first occurrence of a pattern but the pattern can occur anywhere in the text. If the pattern is not found, it returns None.

Once suspended, amitness will not be able to comment or publish posts until their suspension is removed.

Once unsuspended, amitness will be able to comment and publish posts again.

Once unpublished, all posts by amitness will become hidden and only accessible to themselves.

If amitness is not suspended, they can still re-publish their posts from their dashboard.

Once unpublished, this post will become invisible to the public and only accessible to Amit Chaudhary.

Thanks for keeping DEV Community 👩‍💻👨‍💻 safe. Here is what you can do to flag amitness:

Unflagging amitness will restore default visibility to their posts.