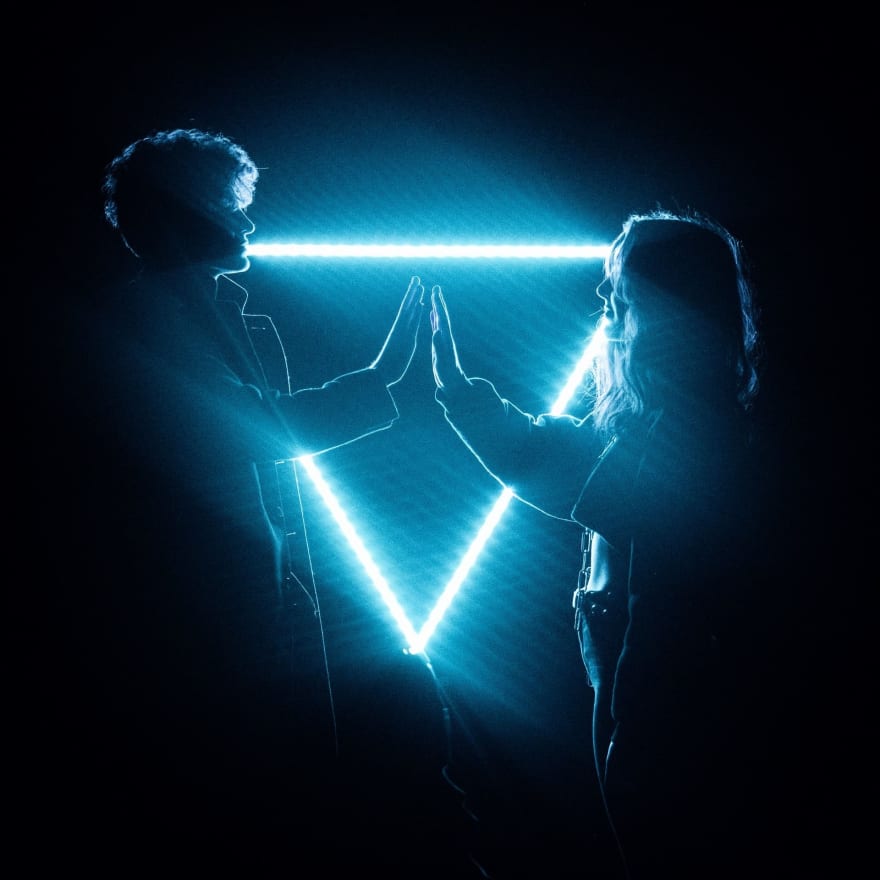 People, processes, and tools are the three foundational pillars of DevOps — the term coined by Patrick Debois in 2009 to describe a new culture of collaboration and shared ownership in software development. With DevOps adoption, software is developed and delivered in short cycles supported by automation and tools.

But DevOps implementation is not all hard stuff. According to Patrick Debois, DevOps is more a human problem. Or, as Viktor Farcic put it in his book The DevOps Paradox, it's a people game at its roots. In the old pre-DevOps days, developers would only tell the operations team after completing a piece they have been working on for months, "Here's version 2.0. Make it run." And Ops would run it to find out that everything has crashed. Finger-pointing was also commonplace.

DevOps processes, however, invite everyone to the party, making teams assume collective responsibility for user experience with new software. In the world of DevOps, Ops engineers are saying, "Fine, we get it, we should ship this piece tomorrow, we'll figure out how to meet the deadline." And Dev people are saying, "We don't want to be messaged in the middle of the night that something has gone terribly wrong, so we will help ship it safely."

In the DevOps environment, everyone is working together toward the same goal — building better quality software faster. With no blame game. Everyone means people from product owners, developers, testers, and IT operations to even marketing and sales that bring customer feedback to the table. An important thing to know is, you don't set up a DevOps department between Dev and Ops to implement DevOps. This way, you can get only a third silo. Instead, you change the culture of Dev and Ops to break down the walls between them.

What is exactly the DevOps mindset?

DevOps implementation above all means a cultural shift. Because DevOps is mostly about soft stuff:

Empathy, meaning the ability to think about things from another's perspective, is believed by many to be the true DNA of DevOps. It allows Ops people to understand the importance of quick releases, while developers can better appreciate problems caused by bad code. Plus, both parties are putting users at the center of everything they are doing. Empathy powers collaboration. Collaboration powers productivity, encouraging everyone to commit to software development quality and speed.

Scrum standup meetings and retrospectives allow teams to understand what was done yesterday, what was successful, and what can be improved. In a knowledge-sharing environment, DevOps engineers learn new things and grow continuously, adjusting their competencies. At a bare minimum, everyone on the team should have on-demand access to source code, logs, tools, test servers, production builds, and postmortem reports.

DevOps is hypothesis-driven development. Failing fast to learn faster through a tighter feedback loop is key to DevOps implementation. DevOps teams write code in small batches and push it to production as quickly as possible. This way, they have an immediate chance to put the solution right by fixing defects swiftly or removing a certain feature altogether. As The DevOps Handbook co-author Jez Humble said, "Users don't know what they want. Users know what they don't want once you've built it for them." So, the DevOps mindset is about starting with intuition and learning lessons as you move forward to arrive at a data-driven decision.

The DevOps culture relies on a product-first approach that cares about the needs of real users. DevOps teams should understand what they build and understand the people for whom they build. Continuous feedback is crucial. This often means that (i) Ops take part in developing service-level agreements with users to understand user requirements, (ii) developers heed to end-user requests with fast updates, leveraging a loosely coupled, service-oriented architecture that allows utmost flexibility, and (iii) testers set up user focus groups for a controlled UAT, interacting with users directly.

A very strong emphasis in building DevOps is put on automation that reduces human error and amplifies speed, cutting overhead costs. Automation in DevOps processes is extended virtually to everything, from development and testing to infrastructure provisioning, configurations, network tasks, databases, deployment, and monitoring. Netflix is known as a fantastic example for DevOps implementation, with its fully automated deployment processes allowing engineers to run code thousands of times per day.

Why to implement DevOps

According to the 2020 DevOps Trends Survey by Atlassian, organizations see a number of benefits from DevOps implementation, including:

Speaking of tangible DevOps benefits, an example from our experience would be a 5x increase in the speed of delivery of new features that we helped achieve in gaming app development.

It's impossible to oversell the importance of automation for a successful DevOps implementation roadmap. Automation, however, cannot be done overnight. It's a journey with multiple stops and requires careful planning. According to the Boston Consulting Group's (BCG) classic article, Leaner, Faster and Better with DevOps, organizations implement DevOps in four automation steps: 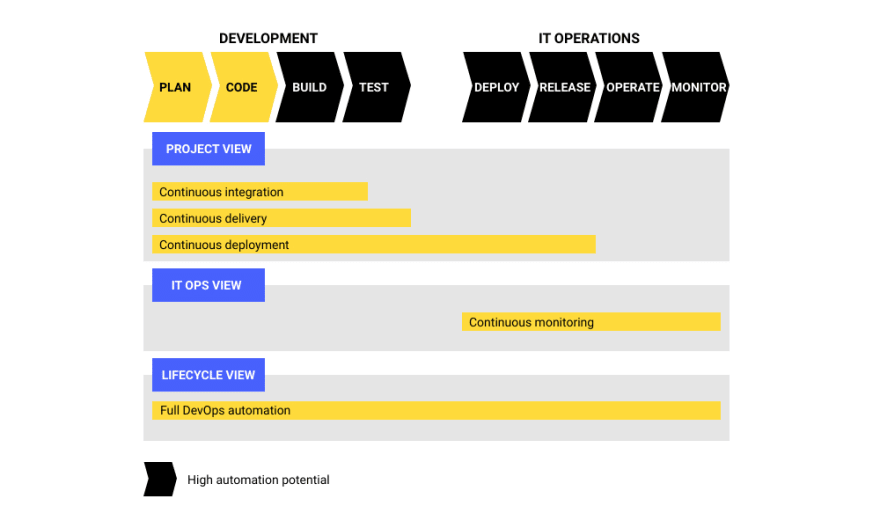 An essential part of agile processes, CI allows DevOps teams to always work with the latest code version. In the CI process, developers push new pieces of code into a shared repository at least once a day for validation through an automated build and testing, which typically includes unit, integration, and basic security tests. Builds and tests are triggered by a version control tool for code check-ins which the server is watching. So, CI is a fully automated process run within a few seconds or minutes to allow developers to know immediately if their code is right and has successfully integrated with others' code or has broken the build.

Continuous Delivery automates the build-test-release process, allowing new builds to be released with one button push. While CI is focused on the quality of code to make sure it passes all testing before being merged into the master build, the objective of CD is to ensure through more testing that the software (the master build) behaves as intended in the real world. CD is a short cycle, completed in a few hours, enabling the team to automate everything in the life of a code. In essence, it consists of two pipelines: a CI pipeline and continuous testing.

If an organization's environment is automated, ensuring its stable performance will be an imperative. In DevOps infrastructure, there are a lot of things you can monitor, but it is, however, impossible to keep track of all of the services and procedures. So, when implementing DevOps, you need to understand which are your primary monitoring targets. These can include the efficiency of your CI/CD pipeline, deployment milestones, automated handling of vulnerabilities, server health, user activity, application logout output, and application performance. You do the job either through application monitoring tools like Datadog or Newrelic or by going manually through application logs or by configuring the notifications and alarms. Important metrics to watch are failures, usage patterns, performance, availability, scalability, and custom telemetry.

Drawing on our vast hands-on experience, we've compiled a list of practical recommendations on how to implement DevOps activities successfully:

While it may be cliche to say that every business should implement DevOps today if they want to keep up with the pace of innovation and stay competitive, almost half of organizations are only starting with DevOps, practicing it for less than three years, according to the 2020 DevOps Trends Survey. DevOps transformation indeed can be complicated. It is not an initiative that can be undertaken once and for all. It is not even done after you implement continuous practices. These will require continuous improvement as well.

Contact ITRex if you are interested in learning more about DevOps or need help from our experienced consultants with starting or accelerating your DevOps journey.