At the start of 2021, I built my first "Raspberry Pi Cluster-in-a-Box". It was based on a HAT (Hardware Attached on Top) expansion board for the Pi, called the Cluster HAT. 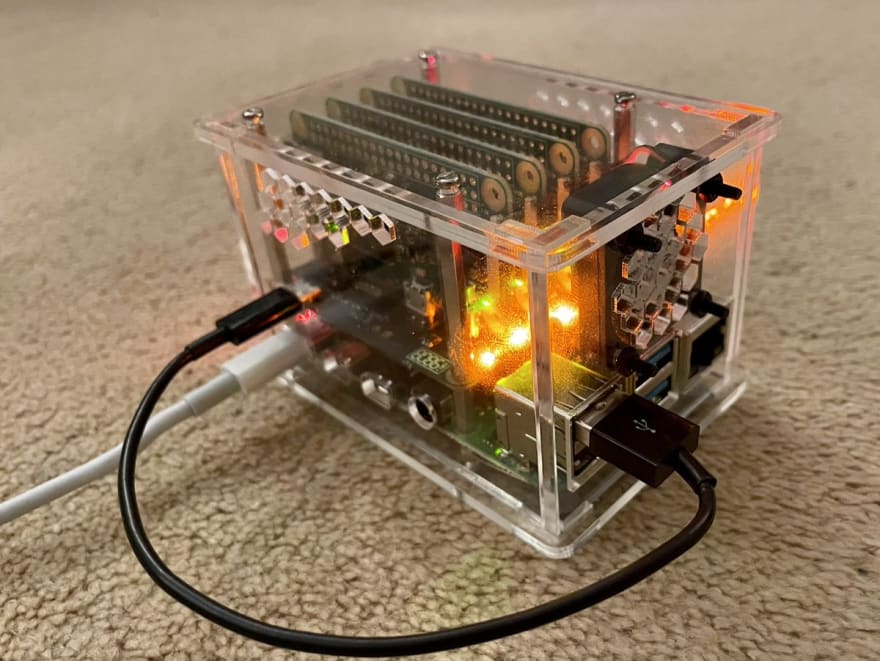 Some folks thought it was cool… and others (somewhat predictably) asked… why?

The answer then, as now, is a combination of "just because", and "to learn more about clustering"!

This weekend, I got around to updating it. I've taken it from the original set of Pi Zeros, to the more recent Zero 2 Ws. It took me a while to collect enough of the newer boards to do it (due to limitations on how many you can purchase from most suppliers); and then, a surplus of other projects got in the way, before I had the time to pick it up again.

Note to DEV readers: you can also check out my post about Raspberry Pi Pico. 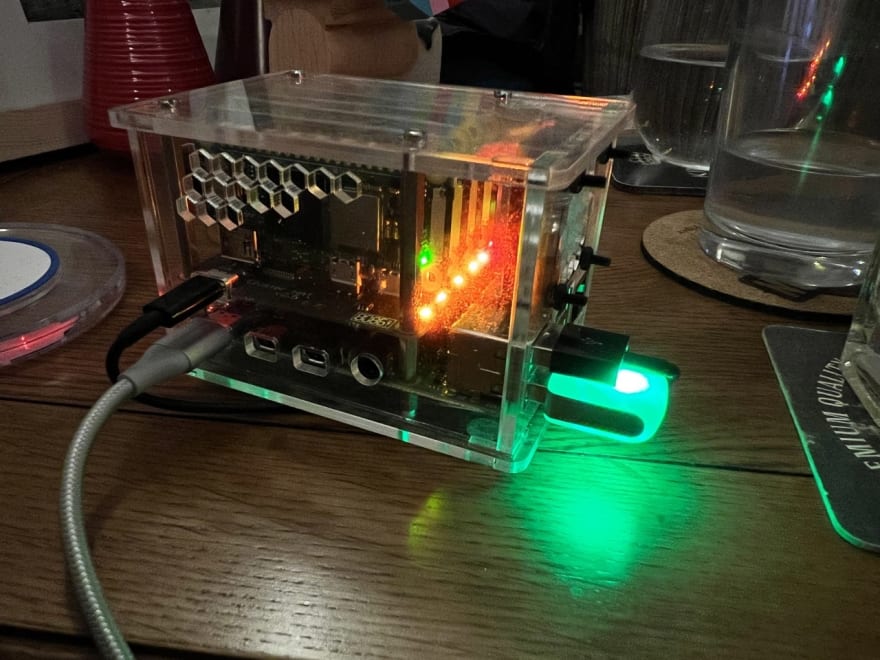 So, this is now a Raspberry Pi 4B 4Gb with a Cluster HAT and 4x Pi Zero 2 W, now all running on Bullseye 64-bit Raspberry Pi OS. This is much more functional and useful than the previous iteration, due to the much more capable processor on the Zero 2. At the moment this is running Slurm across all 5 nodes to run workloads, and I have plans to install Kubernetes. The case is this one, from The Pi Hut.

I used several resources to get this rebuilt, but since I am using the new Pis, and wanted to update to the latest OS, there were a number of changes along the way. First of all, huge shout outs to Chris Burton of Cluster HAT fame, the contributors to the Cluster HAT mailing list, Garrett Mills, and (mostly) to Davin L. who wrote the excellent "The Missing Cluster HAT tutorial" that got me up-and-running both this time, and the previous time, around.

I'm not going to repeat that whole tutorial line-by-line here. It's the main guide I used to get through the initial build, and I switched over to Garrett's guide to building a cluster (parts 2 and 3 in particular) in order to get Slurm and Munge fully configured. I will make a few call-outs to things that were different, or choices I made.

With that, let's go. Remember that this summarises the tutorial with changes where I made them; it's not a replacement.

tvservice -o (to disable HDMI at boot, to save power, but requires the legacy GL driver)

Back to the controller

So far, so good. I went on to try various things from Garrett Mills' three part series, including building and testing with OpenMPI. 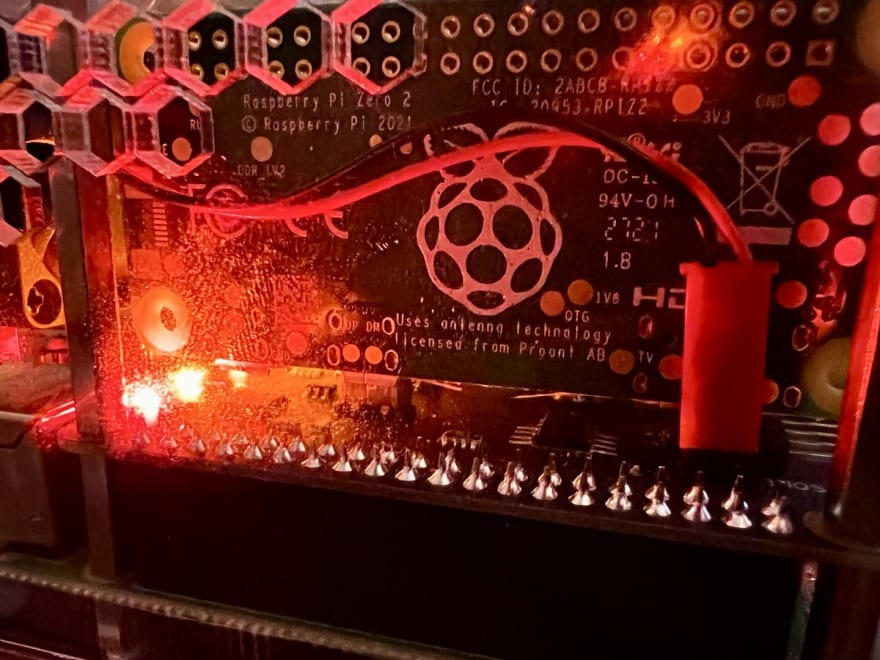 The for-fun "bonus" is that there's a blink(1) mk 3 attached on USB on the controller, with blink1-tiny-server software managing it. This is set up to run as a service when the controller boots.

Another Pi on my network runs Homebridge and (more specific to this project) Node-RED, and now has a flow that subscribes to Cheerlights on MQTT, and calls blink1-tiny-server over HTTP to update the light colour. This is an over-engineered way of lighting an LED on a server, but it was fun (and very simple) to build the flow. Longer term, I'm likely to use the indicator as a workload status, rather than just for Cheerlights, but in the meantime… I love that API! 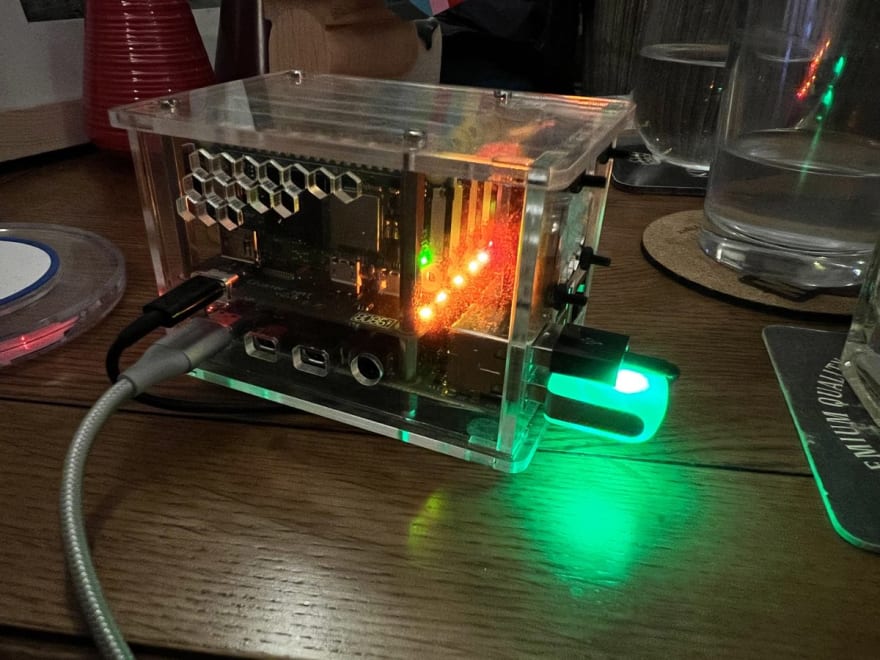 So… what have we learned?

This is primarily an educational project for myself, and there are some potential things to look into already:

Note to DEV readers: you can also check out my post about Raspberry Pi Pico.

Installing node-rdkafka on M1 for use with SASL