Along with many others in tech, I've been working from home on a forced-permanent basis since mid-March. Over that time, I've incrementally improved my working environment. I've been living in the place I'm currently at for a little over 7 years, but up until recently, had only a small cheap desk that I'd picked out in a hurry, and it was becoming increasingly frustrating as a day-to-day workspace - in fact, my "home office" felt incredibly unfinished.

In the past few weekends, I've finally got around to "properly fixing" the space. I Tweeted a few photos and had a number of questions about what individual items are, so I thought I'd talk through the setup.

Disclosure: Amazon links contain affiliate codes, others do not

First, the room itself - it's a small, narrow guest bedroom with a comfy chair-to-single guest bed, so we wanted to retain at least that space. I hadn't put any shelving in. I settled on some String Pocket shelves. The String system is very neat, very customisable, and the Pocket shelves are not very deep (only 15cm from the wall) so they don't provide too much of a head-bumping hazard if you're getting out of the guest bed... but there's enough space for some decoration, paperbacks, and gadgets. Very easy to install, as well. I can add additional boxes that attach to the ends of the units, and with the perforated metal ones on the wall by my desk, I'll be able to hang hooks and bars for extra bits and pieces. 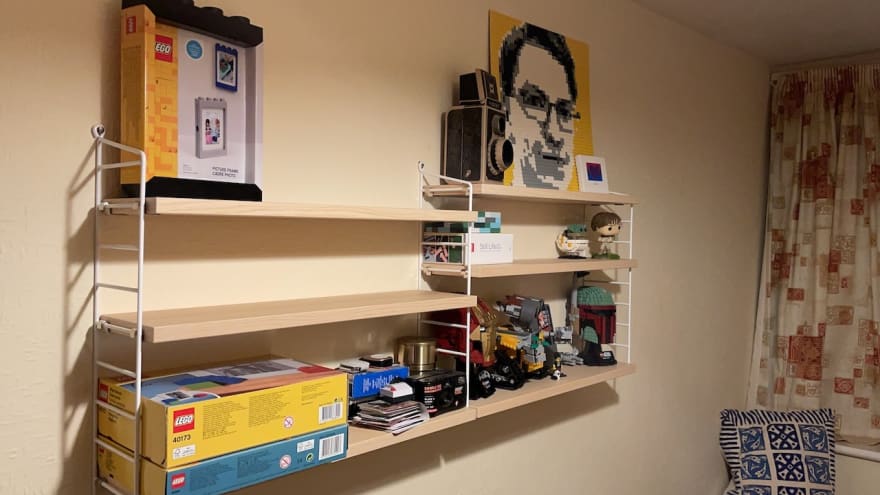 Next, the desk. I replaced the small and surprisingly bulky desk you can see in the left corner of the picture below, with another one I picked up on Amazon this week - it's about 30cm wider than what I had before (taking it up to the bookshelf), 20cm deeper, and it has open sides, with cable management holes in the back corners. One of Amazon's own brands, so also fairly inexpensive, and seems decent so far - it even came with the tools needed to get it assembled. 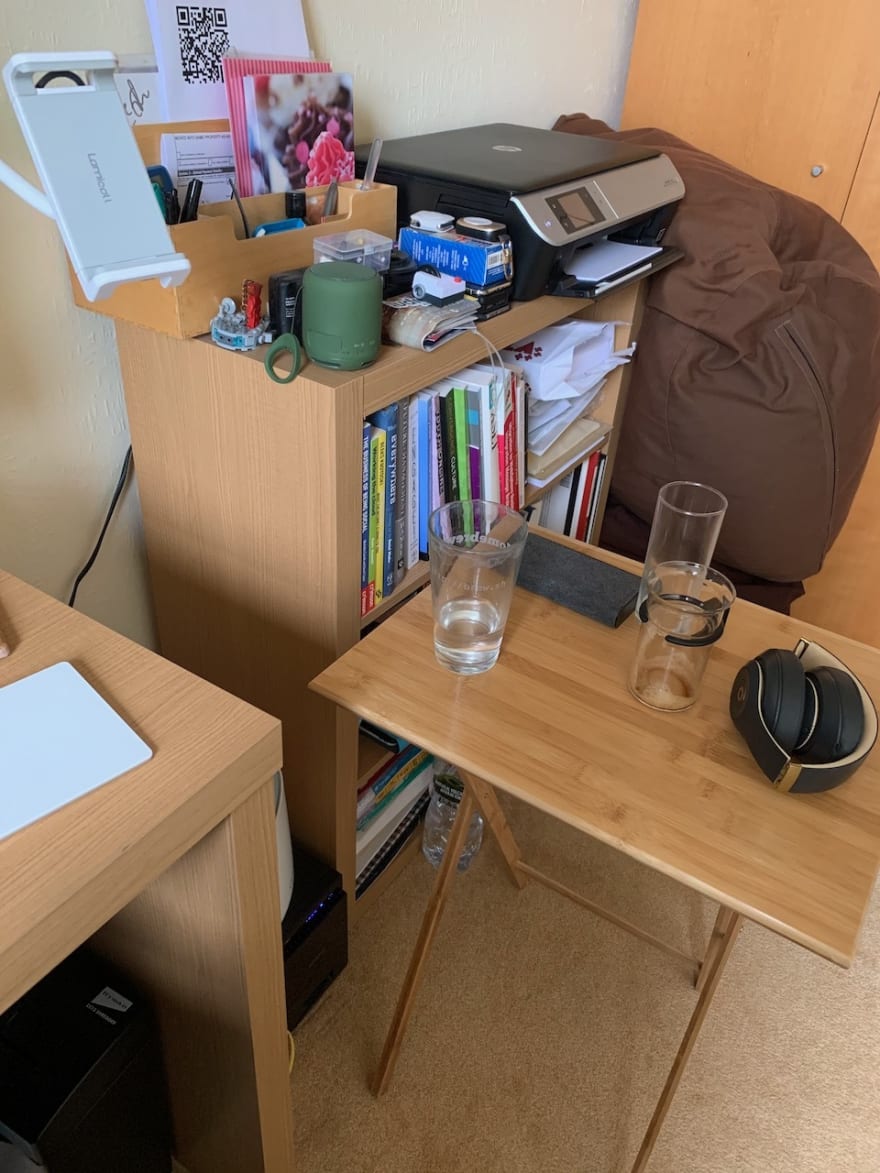 I also wanted to properly manage the cable jungle that used to take up my foot space, so I added a couple of metal cages underneath, to get the majority of power strips and adapters up from the floor. One thing to note is that this took a couple of attempts to get right, because once I started to clamp things on the back of the desk, I found I needed to move the cages in from the back edge. Easy to install, though - tapped a hole with a bradawl where I wanted to put the screws, and they went right in.

For the rest, I'll work from left-to-right across the space, for simplicity. 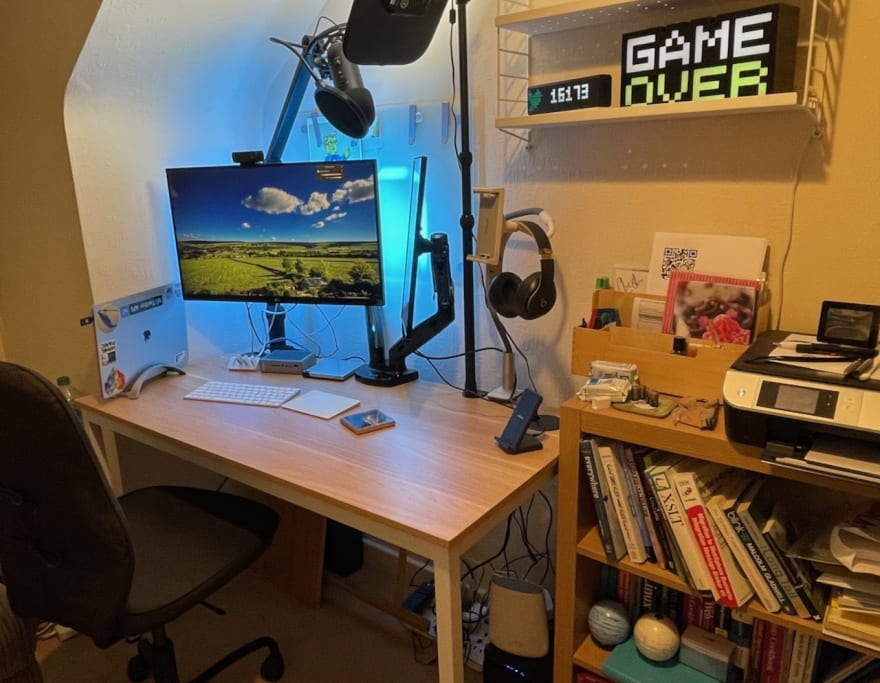 My MacBook is closed clamshell in a TwelveSouth BookArc stand, plugged in to a single Thunderbolt 3 cable.

The USB hub furthest towards the wall is a dumb USB 2 extension for any devices I might quickly want to plug in; it has a couple of blink(1) lights installed, for when I'm playing around with MQTT.

The CalDigit TS 3 Plus dock is more-or-less the heart of the whole setup. It connects to the laptop over Thunderbolt, and connects to the LG display over USB-C. It also brings in an Ethernet connection from my hub; a Pioneer BDRW drive; the Blue Yeticaster that's mounted to the far left corner of the desk, great for podcasting; and the Logitech C920 webcam. Top tip for the latter, I find the Webcam Settings app on the Mac App Store useful for tweaking the output. Logitech's Gaming Software has similar functionality, but it can be confusing to find on their website.

The display on the left (primary) is an LG 27UK850 which is a fabulous USB-C capable, 4K HDR monitor... well, the HDR would be nice, if macOS didn't blow all the colours out when that is enabled...! The display on the right is a "portable" 15.6" 4K monitor I added this week (and that I was so impressed with, I reviewed, here) - ideal as a portrait screen for reading documents. That connects in to the CalDigit dock via an active DisplayPort to HDMI adapter (important note, this will only work with an active adapter, I went through various other permutations trying to get a second display working via the TS3, until I read the support pages).

One of the key things I did to cut down on desk clutter, was to take the monitor off its desktop stand and mount it on an arm - just installed this today for both of the displays. I also have a Lamicall gooseneck clamp on the right hand side, that I've previously used for using my iPad as an additional display, and it's still handy there.

The lighting - the back of the monitor has 3 Philips Hue Play bars attached, configured to light-sync with the display itself via the Philips Hue Sync app. If I was doing this again today, I'd probably use the more recent Hue light strips, instead. The other light is an Elgato Key Light, which is great with the angled wall, as it just bounces light onto me when I'm on a video call. I made an iOS shortcut for quick toggling the Elgato light and I plan to do the same as an Alfred script; I just wish Hue Sync had scripting support for setting up the light sync - I can switch the lights on normally from a script, but not synced with the display.

There's an Anker wireless charger for my iPhone on the side of the desktop - overall, I have a lot more room on the table now.

The shelves have a couple of MQTT GlowOrbs; a colour-changing USB-powered "Game Over" sign; and a LaMetric TIME smart display. I've got a RAVPower USB power supply hidden up there for distributing power - Anker and RAVPower are both brands that have yet to disappointment me. The goal for these gadgets is to use them for various ambient displays and alerts, but I need to get my Node-RED setup sorted out next!

Underneath, I have a Netgear NAS for backups and media streaming; an ethernet switch; the main router for our Netgear Orbi network (there are three satellites distributed elsewhere in the house); and the Philips Hue base station. There's also room to store a paper shredder, and the folded-down side table I'd bought in March, right at the back out of the way, until they are needed.

Today is Day Zero for this new setup, so I'll be interested to see how my usage of the space changes once I get to work.

Let me know if you have any questions!

[One more thing - yes, I did think about a standing / adjustable height desk, and I know I would use one - but as you can see from the setup here, and the sloping wall, I wouldn't get any practical use out of one before the mic, light and monitors hit an obstruction. Another time!]