I like to shake things up in my development flow every now and then to make sure I don't get too comfortable (heaven forbid the Imposter Syndrome stay away for longer than a week at a time). Right after figuring out the difference between React state and props, I threw everything I knew about state management out the window and started working through Redux. WordPress with PHP is pretty cool, but how about Gatsby?

To get started, create a new directory and npm/git init that bad boy. Since we're only interested in the backend for now, we only need to install one dependency: GraphQL-Yoga. This nifty little package gives you everything you need to start making GraphQL queries, plus spins up an instance of the ever-so-helpful GraphQL Playground. Install this with yarn add graphql-yoga (or npm install graphql-yoga if that's more your speed).

From the root of your project folder, we'll need to make a couple of files. Run the following:

And set them up as such:

I'm on a bit of a horror movie kick, hence the inspiration for my seed data. As you can see, I've already added the first query/resolver combo to display all of the horror flicks. Try running the following query in GraphQL Playground (on localhost:4000) and take a look at the results: 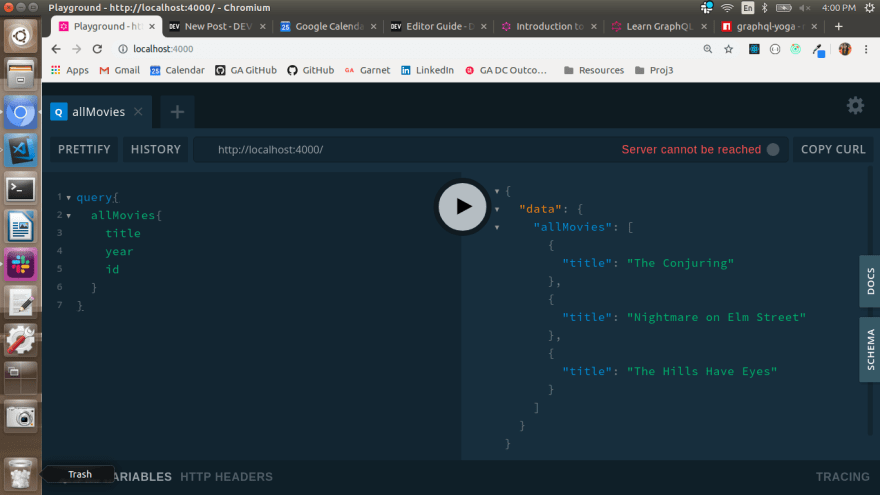 What's really nifty about GraphQL is that well-written queries will return exactly the data that you ask for: no more, no less. Instead of grabbing everything about each movie object (as seen above), you could simply return the titles with this slight adjustment:

What if we just wanted to return information about one movie by querying its ID? It'd be reasonable to try the following:

But then you query it and you get an error claiming that you "cannot return null for non-nullable field Movie.title." There definitely IS a movie with the ID "movie1," so clearly that should have a title. What the heck is going on?! 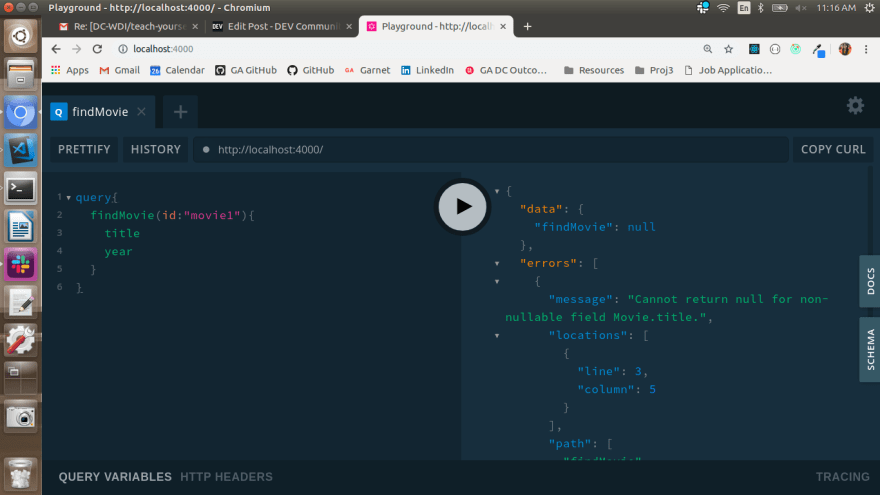 Though this looks like some sort of poltergeist bug from the great beyond, it's actually a matter of nesting objects (or, more specifically, nesting objects inside of arrays inside of objects). Run the command again with these console.log statements inside of your query resolver and consider their outputs:

Do you notice the subtle difference between the second and third result? We weren't able to return the variable film by itself because it was not of type Movie. Rather, it was an array that contained a single movie instance. To get around this, edit your query resolver so that it returns the first element in that array:

Restart the server and run your query again. Bazinga! 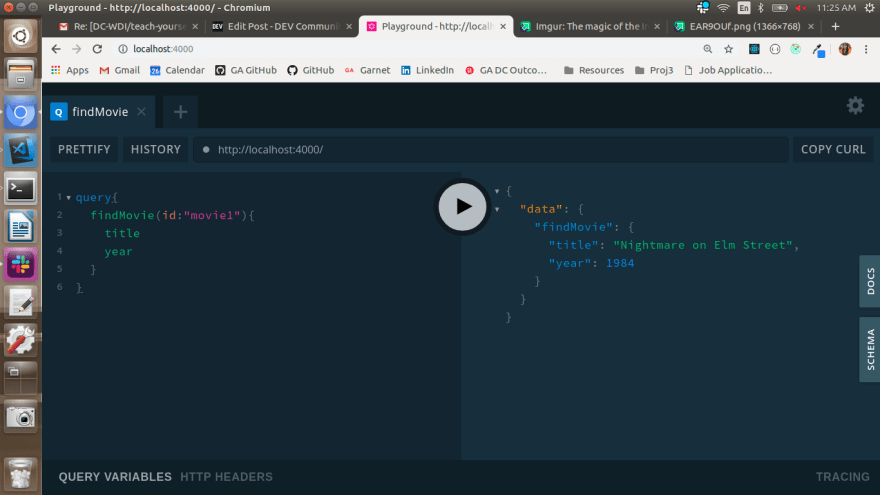 That's all well and good, but new horror movies are being made all the time, so we need some way to add movies to our array. This introduces a new type of operation: the aptly-named "mutation."

Consider what data needs to trade hands in order to make a new movie object. According to our model, each movie has its a title, a year, and a unique ID. Since we're not working with any external APIs yet, we'll need to include the title and year by ourselves. However, inputting an ID by hand may prove perilous; what if we forget how many movies we've added? What if we forget our capitalization conventions? To stay away from such spooky possibilities, it's best if we let the program take care of the ID by itself. This is where the movieID variable comes into play!

I'm admittedly still working to figure out what's going on with that parent argument, but the mutation doesn't work without it. Language specs: can't live with 'em, can't live without 'em.

Regardless, refresh the server and try adding a movie. You should wind up with something like this: 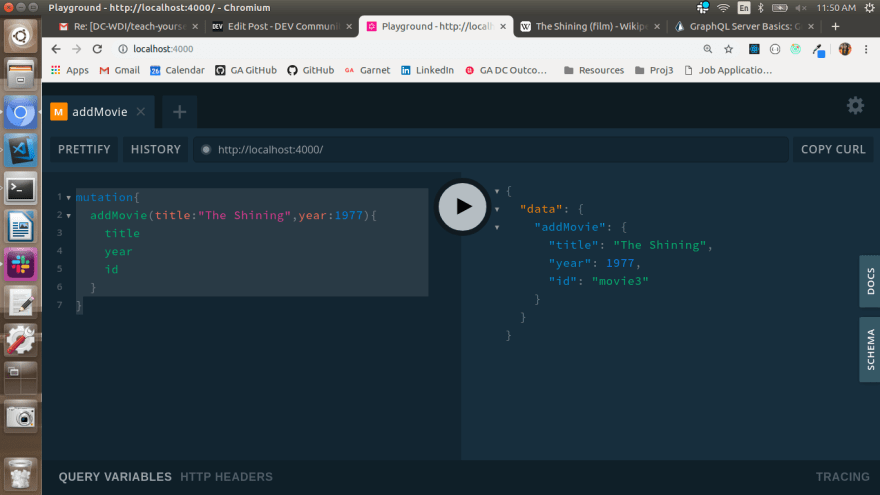 D'oh! The eagle-eyed among us will note that when I added The Shining, I accidentally set the release year to 1977. That's when the original Stephen King novel came out, but Stanley Kubrick's interpretation didn't hit the big screen until three years later in 1980. We must make amends!

Because this is editing the data as opposed to simply reading it, updating the film object will be another mutation as opposed to a root query. In terms of how to shape the mutation, consider again what information needs to go where. Querying by ID is often a good idea, especially given that we may need to update either the year or the title in any given request. However, as in this example, not every request will necessarily update both properties. We'll want to write it in a way such that up to two parameters are accepted, but not required. Finally, it's within the realm of possibility that someone could query a movie with the ID "redrum," and given how we structure our IDs that search should come up null. Therefore, we can't require that this function outputs a Movie:

The conditionals ensure that only the input data fields are updated. Back to the server and lather, rinse, repeat: 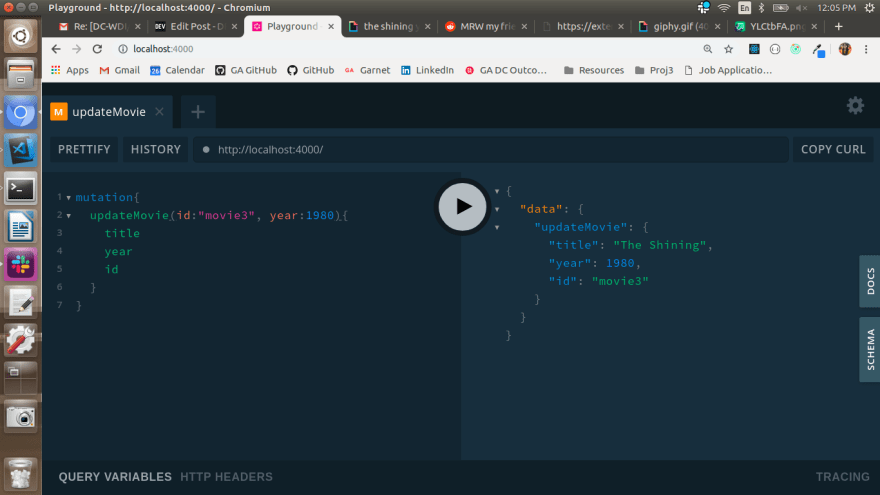 Glad we got that straightened out!

Deleting an object from our array with GraphQL combines concepts from each of the three prior functions:

Given these similarities, I'll leave this final function as an exercise (though you can visit my GitHub repo if you need a hint or want to check your work). You should end up with a final request that looks a little like this: 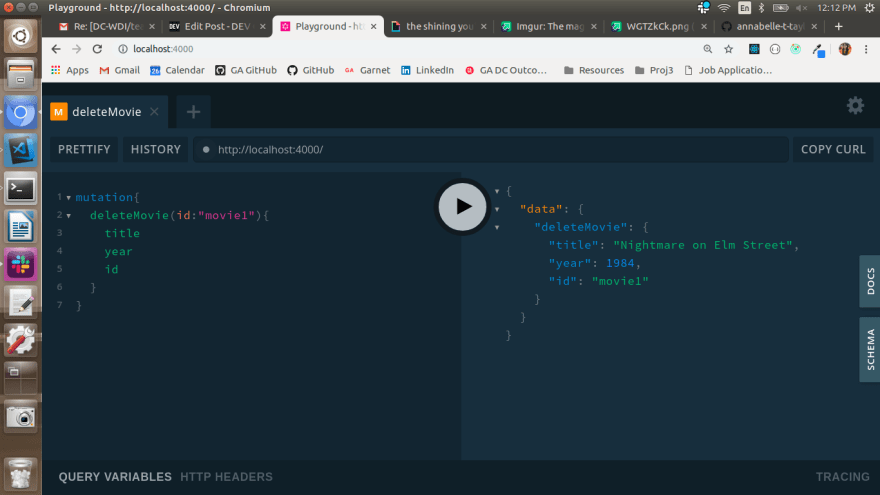 Obviously, this walkthrough merely scratches the surface of everything that's possible with GraphQL. If you're interested in exploring further, I recommend checking out the following resources: