Like many people, I would like to get my hands on the new Xbox. And like everyone but the most diligent online shoppers, I have so far failed in my efforts to do so, and have instead been relentlessly greeted by images such as this one: 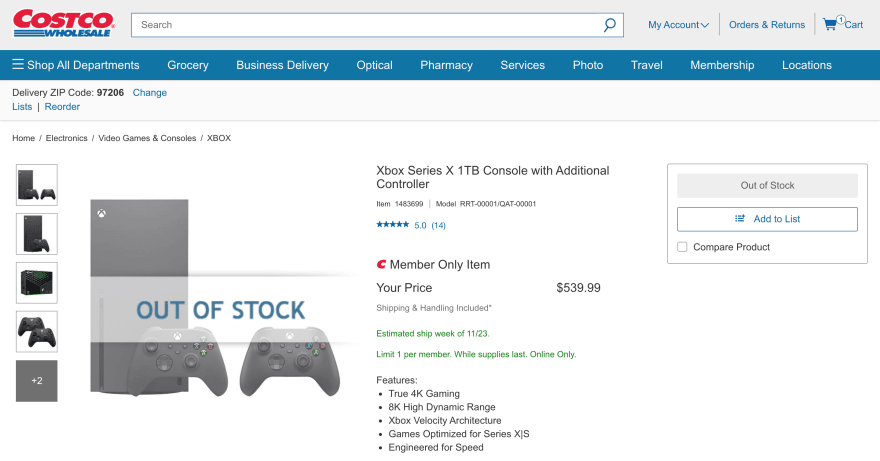 So what does an enterprising/desperate web developer do? Build their own alert system, of course!

Now, a web scraper is a pretty simple application and generally the ideal use case for this sort of thing. But I wanted to add a visual element to it, to make sure I wasn't getting false positives, and because I tend to prefer user interfaces over bare code (I do work at Stackery, after all). Also, I've been playing with the Cypress test suite for the past month or so, and absolutely love it for frontend testing, so I've been looking for more ways to implement it in my projects.

Now, I should say: I'm guessing this is not exactly the use case the devs at Cypress.io had in mind when they built the browser-based testing library, but as the famous saying goes, "You can invent a hammer, but you can't stop the first user from using it to hit themselves in the head1".

So without further ado, let's hit ourselves in the proverbial head and get that Xbox!

Cypress has a very neat feature that allows you to view videos from your automated test runs in their web app. In order to do so, you'll need a free developer account:

Create a serverless stack for your scraper

Because store inventories changes frequently, we'll want to run our scraper regularly - every hour to start, though it's easy to adjust that up or down as you see fit. Of course, we want to automate these runs, because the whole point is that you have a life and are trying to avoid refreshing web pages on the reg. Is it me, or is this starting to sound like an ideal serverless use case? Not just me? Thought so!

I originally wanted to run the whole thing in a Lambda, but after an hours-long rabbit-hole, I found out that's really, really hard, and ultimately not worth it when a CodeBuild job will do the trick just fine.

I'll be using Stackery to build my stack, so these instructions go through that workflow. This part is optional, as you can also do this in the AWS Console, but I like doing things the easy way, and Stackery is serverless on easy mode2.

Under Edit Mode, click Template, clear out the existing template, and paste the following:

Let's break this down a bit. For those new to serverless, this is an AWS SAM template. While using Stackery means you generally can avoid writing template files, there are a few things worth noting, and one line you'll need to input your own data into.

This is the CodeBuild project that will be created to run Cypress in a Linux container in one of AWS's magical server estates. You'll need to replace line 70 with the Git repo you just created. This also means you may need to authenticate your Git provider with AWS, but I'll walk you through that a bit later.

Line 101 is where you can change the frequency at which messages are sent. Learn more about AWS schedule expressions here.

Now, if you switch back to Visual mode, you'll see that several resources were just auto-magically populated from the template:

You can double-click each resource to see its individual settings.

Look at that: a whole backend, and you didn't even have to open the AWS Console! 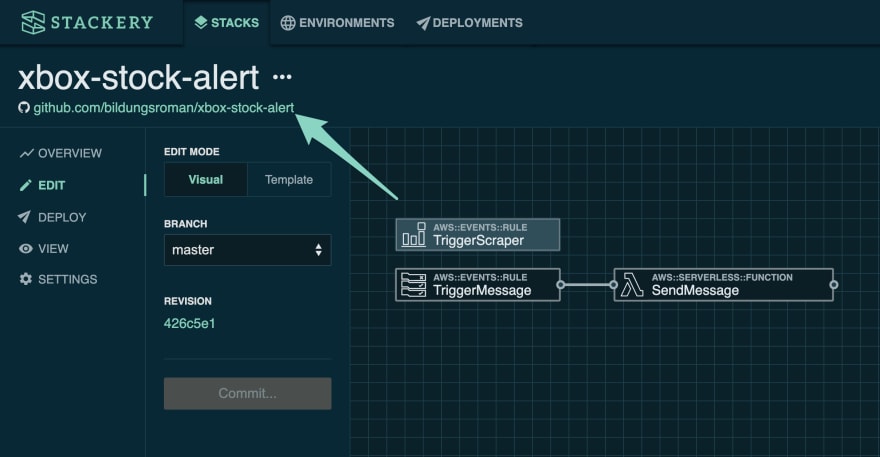 As you can see, Stackery created some directories for your function, as well as an AWS SAM template you'll be able to deploy. Thanks, Stackery!

Let's break that down:

Now, why the specific "Checkout bundle" element? Well, if you go to the Xbox page in your browser and inspect it, you'll see that it's actually the checkout button that would be enabled were the Xbox in stock: 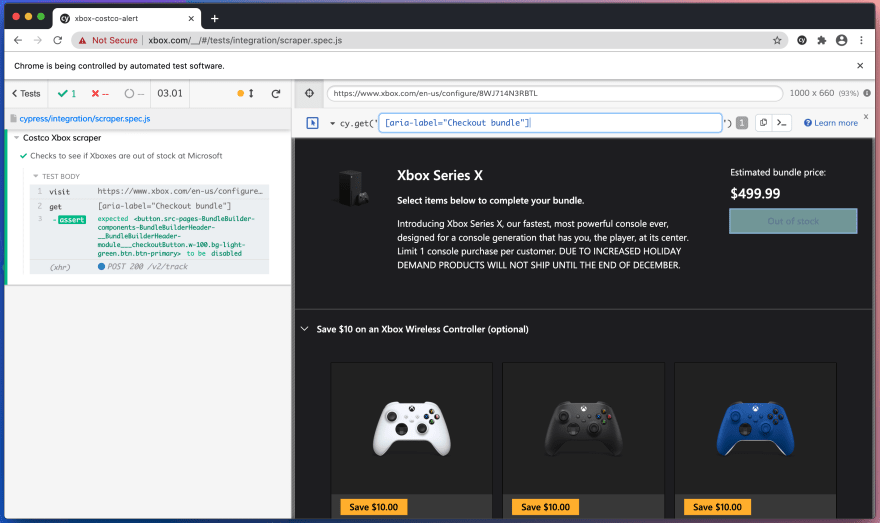 Ok, we've got our test, and we've got a chron timer set to run once an hour. Now we need to add the CodeBuild job that actually runs this test. We also need to add code to our SendMessage function that notifies us if the test failed, meaning the checkout button is enabled and we're one step closer to new Xbox bliss.

Remember that Cypress projectId and record key you noted forever ago? Here's where those come in.

Create a new file in the root directory called buildspec.yml and add the following and save3:

Open up cypress.json and replace it with the following and save:

Next, we'll add the function code that sends an alert should the test fail. Open up src/SendMessage/index.js and replace it with the following:

Oh, and while you're at it, you may want to add node_modules and package-lock.json to your .gitignore, unless polluting Git repos is your thing.

Time to deploy this bad boy

If you're using Stackery to deploy, like the smart and also good-looking developer you are, all you need to do is run the following command in the root of your repo:

This will take a few minutes, during which time you can daydream about how awesome that new Xbox is going to be once it's hooked up to your 4K TV.

Can I get your digits?

As I mentioned above, one of the resources created in your stack was the XboxAlert SNS topic. It was created during the deployment, but right now it's not doing anything. Let's change that. 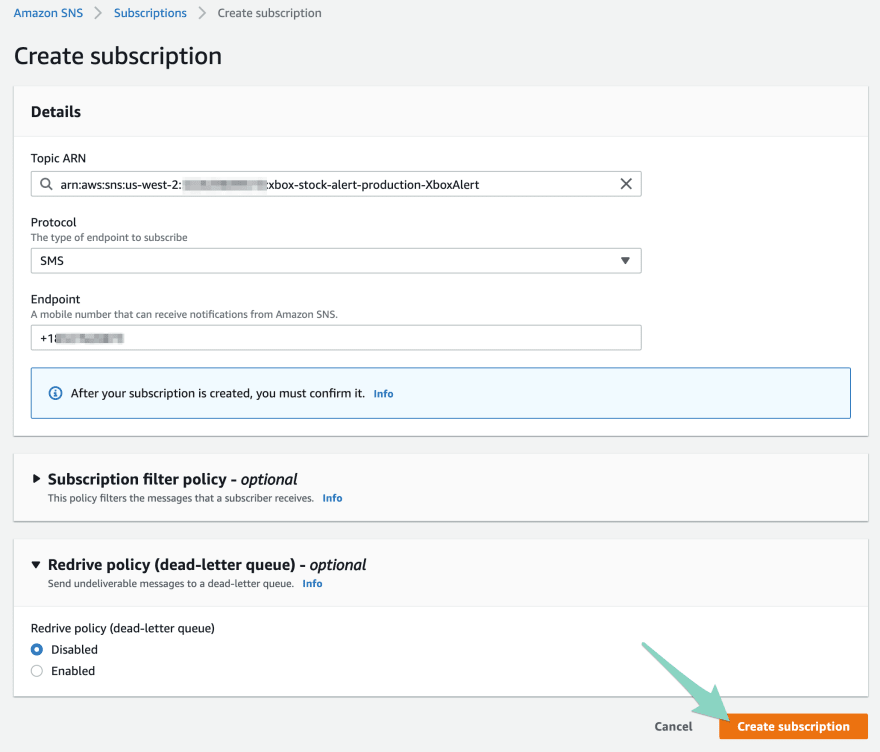 You'll need to verify your phone number if you haven't used it with SNS before, and then you're good to go!

Still in AWS, you should now be able to open up the CodeBuild console and see a new project in there:

You'll want to run it manually to make sure everything works before setting and forgetting it, so go ahead and select your project and hit that Start build button. This will take some time as well, but you can tail the CloudWatch logs by clicking the project name and selecting the most recent build run.

Vids or it didn't happen

Hopefully, your build was a success (and if it wasn't, hit me up - I think I hit all the errors while building this out and may be able to help).

But how can you make sure? Well, you can go back to your project in Cypress.io, and see if there's anything in your latest runs. If all went well, you'll be able to watch a video of the headless browser running your spec!

And, should one day that test fail 🤞, you'll get a notification straight to your phone letting you know that Xbox is right there for the taking. Good luck!

1 I actually just made that up, but I imagine the inventor of the hammer said that at some point.
2 I also just made that up, but that doesn't make it any less true.
3 A much better way to do this is to use environment parameters stored in AWS Systems Manager Parameter Store to store your record key, but for the sake of brevity my example hard-codes the key. Just make sure your repo is private if you follow my bad example 🙏

It's possible to extend the scraper spec to add more retailers, though I ran into issues with a few, such as Walmart's bot detector: 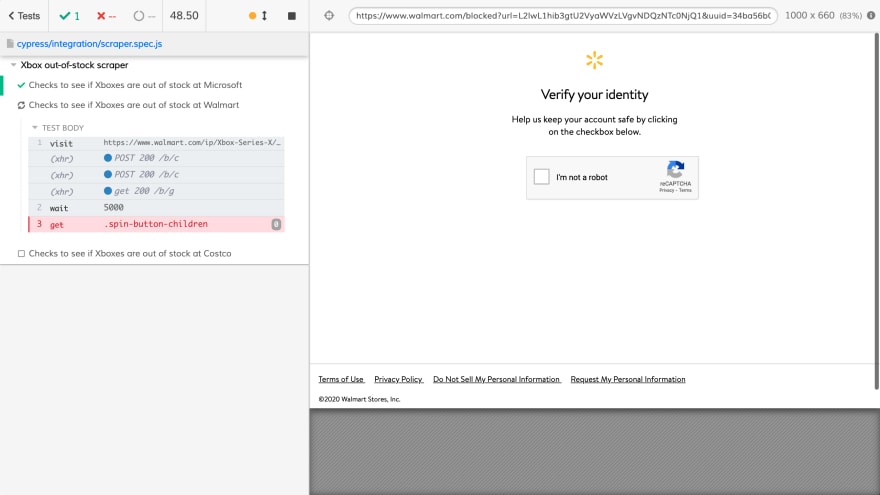 I wasn't able to get these running without errors, but maybe someone else will have more luck and can comment with their solutions:

How to build a Vue.js App without Node, Webpack, npm or build tools

Once suspended, annaspies will not be able to comment or publish posts until their suspension is removed.

Once unsuspended, annaspies will be able to comment and publish posts again.

Once unpublished, all posts by annaspies will become hidden and only accessible to themselves.

If annaspies is not suspended, they can still re-publish their posts from their dashboard.

Once unpublished, this post will become invisible to the public and only accessible to Anna.

Thanks for keeping DEV Community safe. Here is what you can do to flag annaspies:

Unflagging annaspies will restore default visibility to their posts.