While I was working on 🎨 Colour Hunt I had to implement pagination at some point. No one wants to load a ton of color palettes at once. However I really like the lazy load approach instead of a classic pagination.

Colour Hunt is build with Nuxt.js, Graph.cool and vue-apollo. The stack is a dream for rapid development as you don’t need to fiddle around with a backend. The idea behind Colour Hunt is, that people can create and share color palettes. However you can use this techniques for all kind of graphql nodes. Most examples are using the good old Blog example and posts.

So let’s take a look at our GraphQL query: 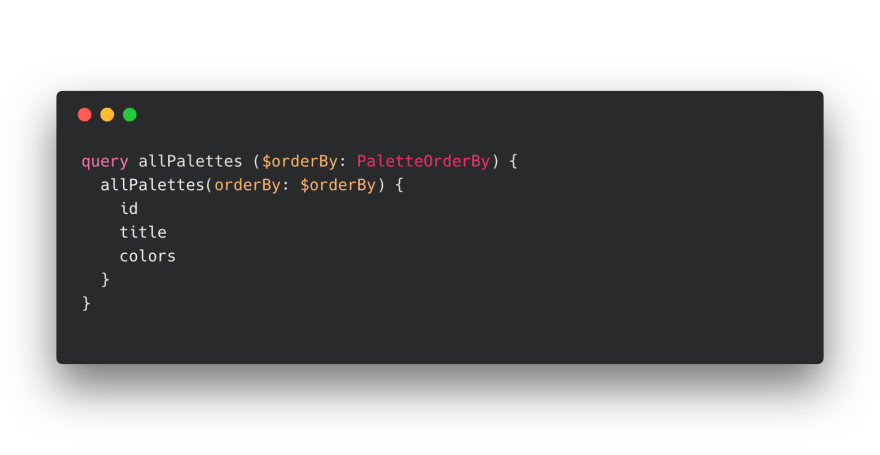 Lets say we have a simple query like this. Just query all palettes that are available and order them by a variable. And our vue component would look like this: 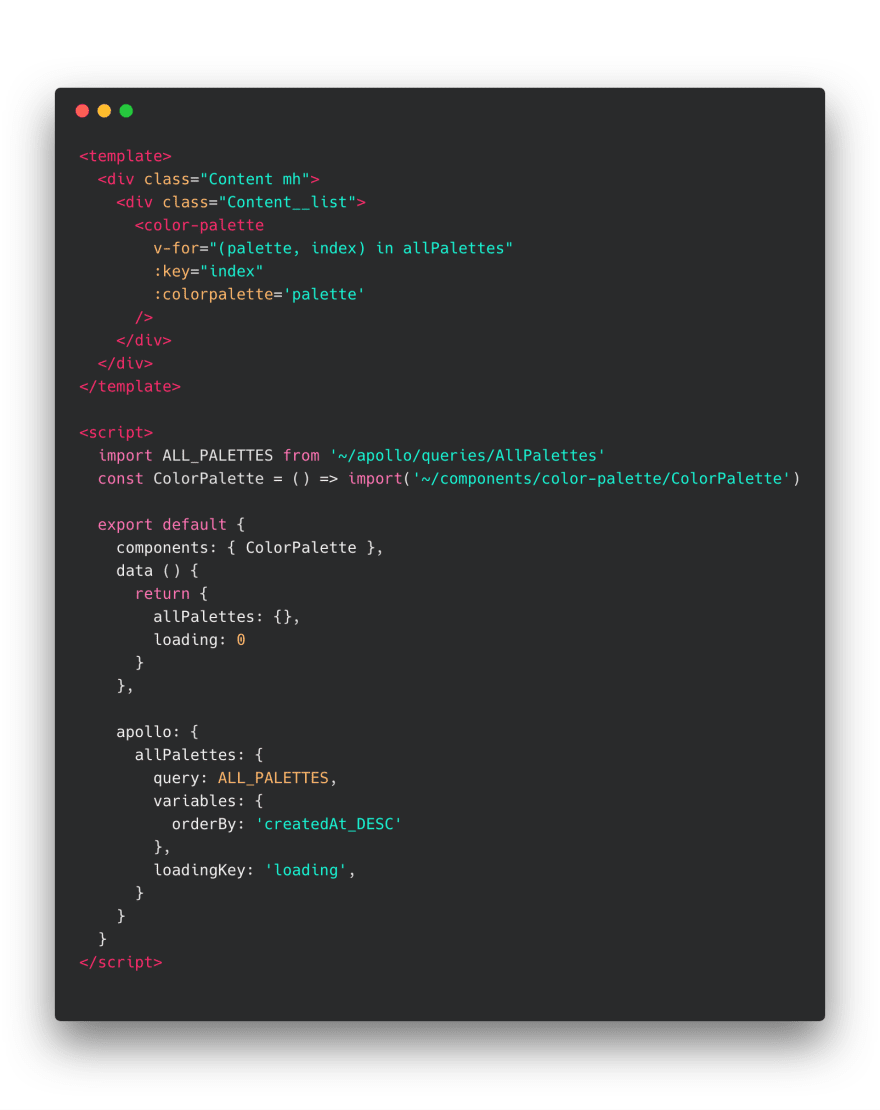 We simply load our query, and vue-apollo does all the magic behind the scenes. And we just iterate over our query results. And render the color-palette component. 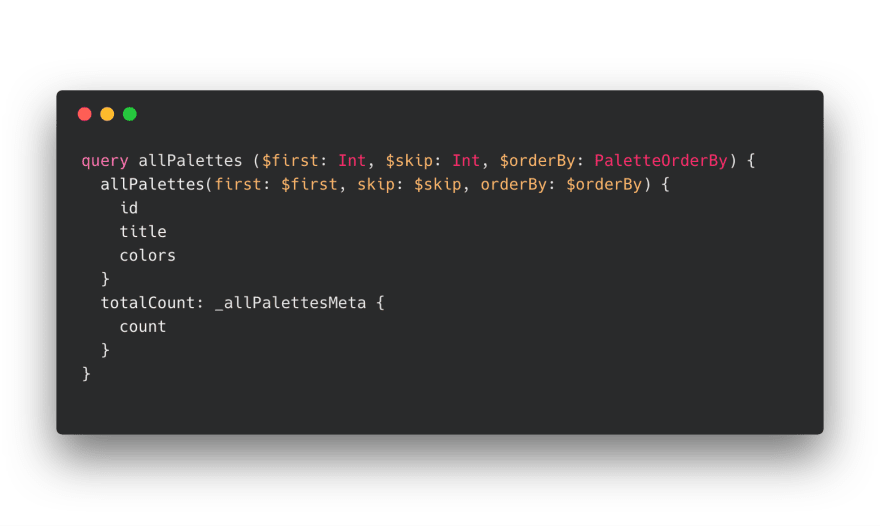 The totalCount is quite important, because we need it to check if there are more palettes to load. If we loaded all palettes, we should not fetch again. We simply add a computed property that will tell us, if we can fetch more. And we can use it, as a condition for our Load More button. 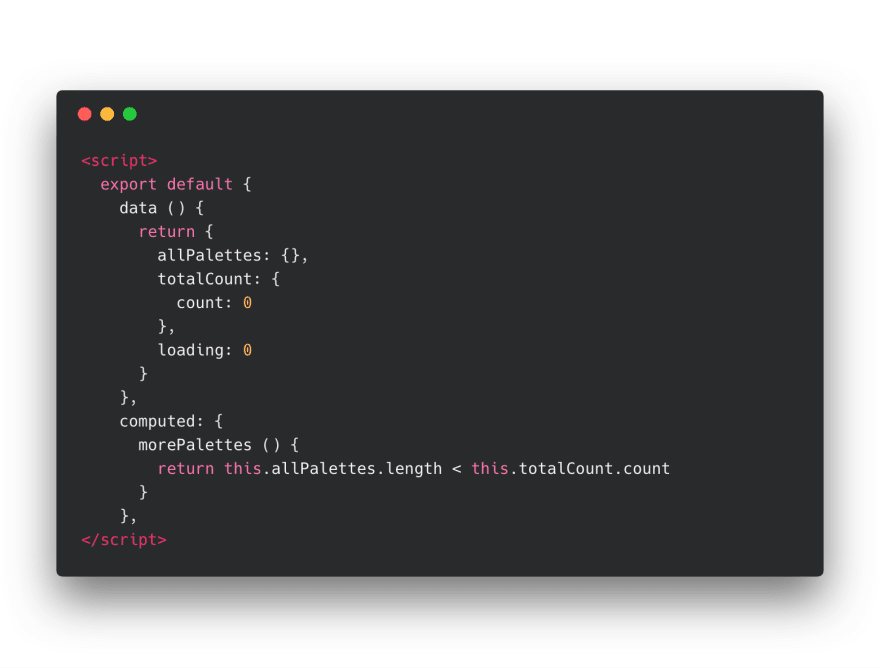 Now we need to update our vue-apollo query and add the missing variables. We should at first create a new variable which holds our number of items we want to fetch. For example PALETTES_PER_PAGE which I created as a local const variable. You could also use a separate file like constants.js where you save all this kind of constants. So you can change it in one place.

Now it becomes a bit tricky. Because vue-apollo automatically map your query result to your local data model. But we have two returned objects. First allPalettes and second totalCount . I guess you could also execute the query twice, but this seems to me like a code smell.

Instead we can use the result() method which comes with vue-apollo. We simply grab the totalCount and assign it to our local this.totalCount. 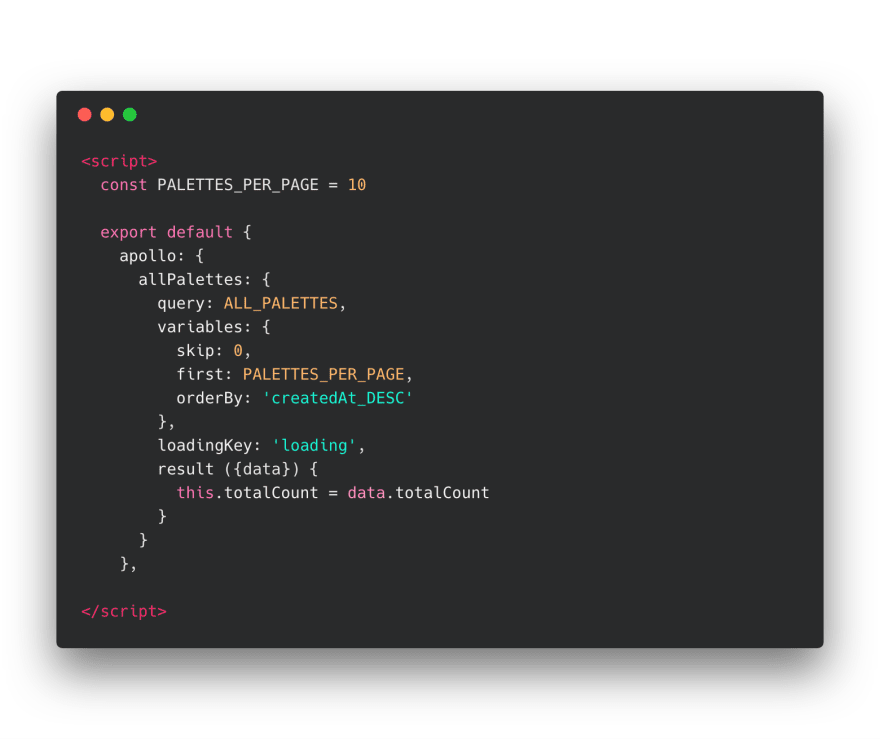 Now lets create our button which will fetch more entries. Simple as that we just add a render condition, which is our computed property.
And as we have our loading state, we can change the button text, depending on if it is loading or not.

And on a click we call our loadMore() method, which we will create in a second.

Now comes the fun part. We need to update our query and fetch more. Vue-apollo comes with a build-in method for that. In our loadMore() method we just need to call

So you remember what the skip argument is doing? Right, it is setting an offset. In our initial query we set skip: 0 and first to PALETTES_PER_PAGE which equals 10. So we are not skipping anything, and loading the first 10 palettes. Now we fetchMore and skip the first 10 palettes. Because this.allPalettes.length is now 10.

However this is not enough. We also have to update our query in the cache. Which is quite simple: We are checking if there are fetchMoreResults if not, we are returning the previousResults. Otherwise we append the new palette results to the old one with Object.assign() and the spread operator. If you have trouble following, it is always helpful to check out the structure of the apollo cache with the apollo chrome plugin 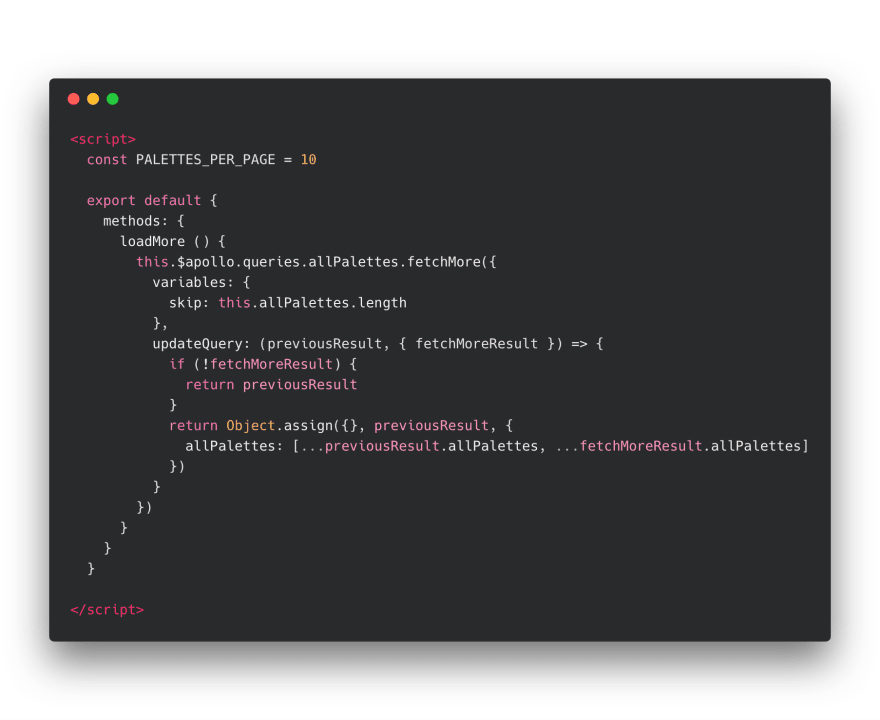 And thats actually it! We implemented lazy loading of palettes in just a few lines of code. And here is the final result:

I am building Colour Hunt in public and you can follow the progress on WIP. I am also live streaming the development from time to time.

Once suspended, apertureless will not be able to comment or publish posts until their suspension is removed.

Once unsuspended, apertureless will be able to comment and publish posts again.

Once unpublished, all posts by apertureless will become hidden and only accessible to themselves.

If apertureless is not suspended, they can still re-publish their posts from their dashboard.

Once unpublished, this post will become invisible to the public and only accessible to Jakub Juszczak.

Thanks for keeping DEV Community 👩‍💻👨‍💻 safe. Here is what you can do to flag apertureless:

Unflagging apertureless will restore default visibility to their posts.