The deep convolution neural networks develop the representations of the images. As we move deeper in the network it will take care of structural features. Reconstruction from the lower layer will reproduce the exact image. In contrast, the higher layer's reconstruction will capture the high-level content and hence we refer to the feature responses from the higher layer as the content representation.

To extract the representation of the style content, we build a feature space on the top of the filter responses in each network layer. It consists of the correlations between the different filter responses over the spatial extent of the feature maps. The filter correlation of different layers captures the texture information of the input image. This creates images that match a given image's style on an increasing scale while discarding information of the global arrangement. This multi-scale representation is called style representation.
This can be easily understood by the diagram given below. 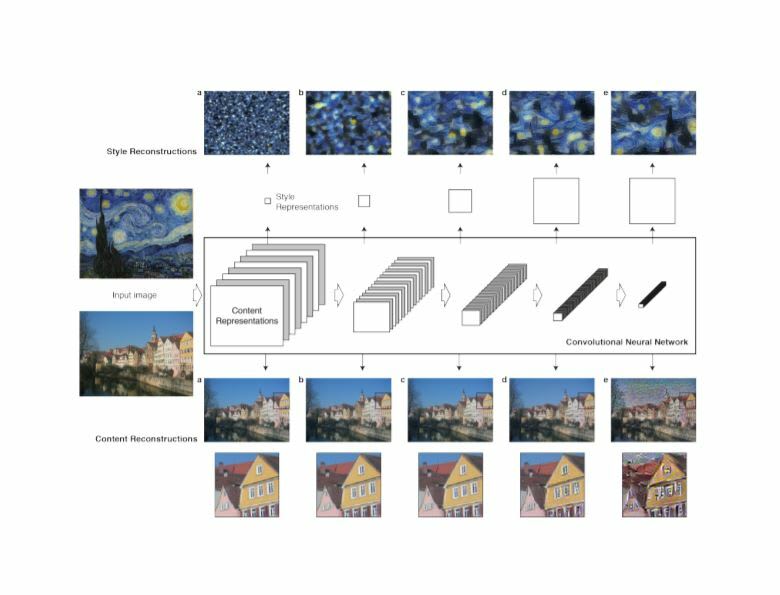 The above architecture of the model proposed in the paper “A Neural Algorithm of Artistic Style”. Here we will use a pre-trained VGG-19 model for content and style reconstruction. By putting structural information from content representation and texture information from style representation together we will generate an artistic image. A strong emphasis on style will result in images that match the artwork's appearance, effectively giving a texturized version of it, but hardly show any of the photograph’s content. When placing a strong emphasis on content, one can identify the photograph, but the painting style is not as well-matched. We perform the gradient descent on the generated image to find another image that matches the original image's feature responses.

You can install PyTorch from here.

We will use VGG-19 model from torch.models().
VGG-19 is a convolutional neural network that is 19 layers deep. You can load a pre-trained version of the network trained on more than a million images from the ImageNet database. The pretrained network can classify images into 1000 object categories, such as a keyboard, mouse, pencil, and many animals. As a result, the network has learned rich feature representations for a wide range of images. The network has an image input size of 224-by-224.

The Layers in VGG-19 model are given below 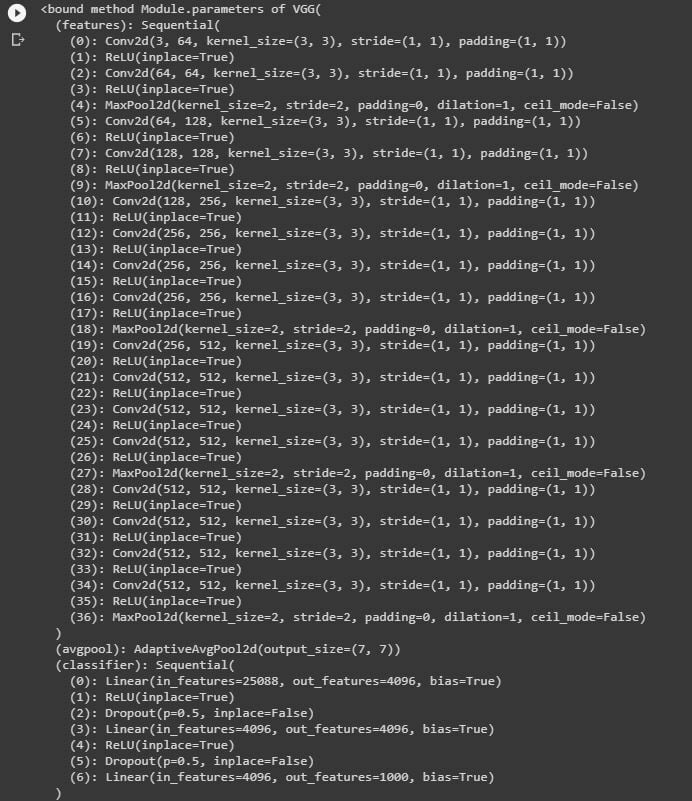 This makes sure if the device has GPU then it will load our model in GPU otherwise in CPU.

we will define a class that will help us to provide feature representations of intermediate layers(as they are complex feature extractor). In this we will use 'block_conv1_1', 'block_conv2_1','block_conv3_1', 'block_conv4_1', 'block_conv5_1' layers whose index values are 0, 5, 10, 19, 28 respectively and then store these activations of 5 convolutional layers in an array and return the array.

Preprocessing is required to make an image suitable for the model.
we will perform preprocessing using torch.transform() like image resizing and converting image into Tensor.
we will define the function with an argument as the path of the image which will return a preprocessed image.

unsqueeze() is used to add extra dimension at 0th index for batch size.

Style Loss Function
To calculate style loss we need to compute Gram Matrix. A gram matrix is a multiplication of a matrix with its transposed matrix.

The gram matrix represents the correlation between each filter in an intermediate representation.

In the above equation, Gˡᵢⱼ is the inner product between the vectorized feature map i and j in layer l.
The following diagram shows how gram matrix is computed in a CNN layer. 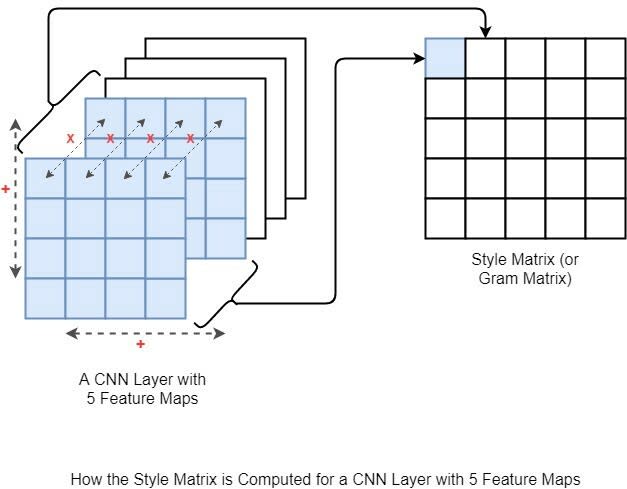 The style loss of layer l is the squared error between the gram matrices of the intermediate representation of the generated_image and style image.

Here w^l is a weight factor contributing to each layer of total style loss.

Final Loss
The final loss is defined as,

where α and β are user-defined hyperparameters. By controlling α and β we can set how much style and content to be inserted to a generated image.

before training, we should set our hyperparameters and optimizer.
I have chosen Adam Optimizer but if you want to can try out with LBFGS Optimizer(Limited-memory BFGS (L-BFGS or LM-BFGS) is an optimization algorithm in the family of quasi-Newton methods that approximates the Broyden–Fletcher–Goldfarb–Shanno algorithm (BFGS) using a limited amount of computer memory) using optim.LBFGS. 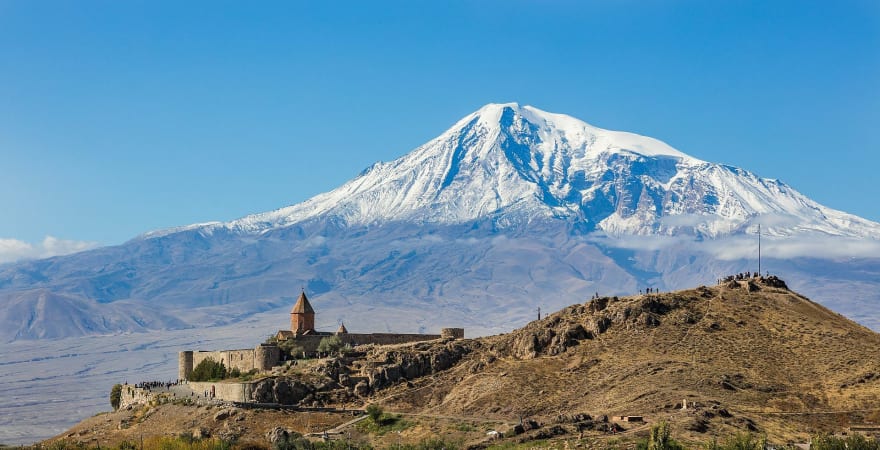 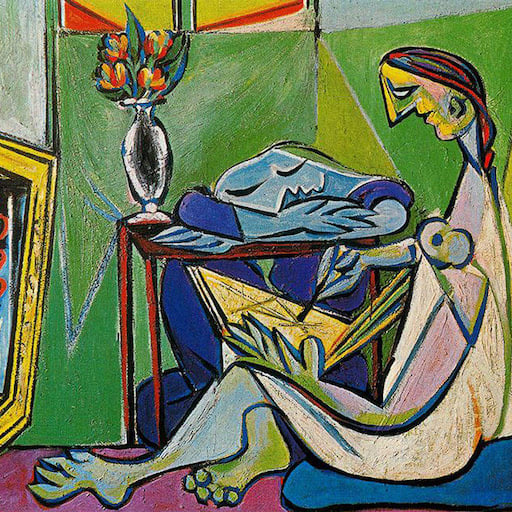 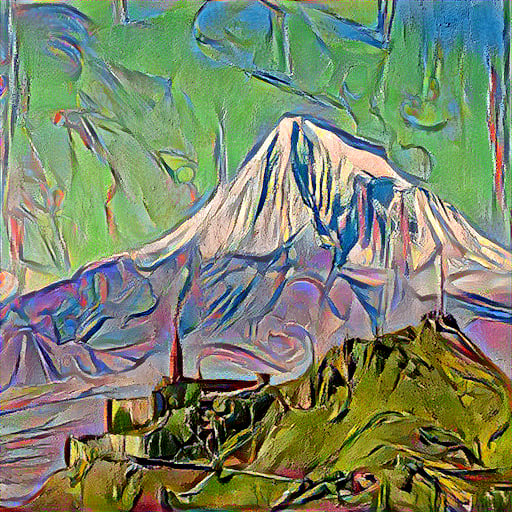 So in this blog, we learned how Neural Style Transfer works. We loaded the pre-trained VGG-19 model then preprocess the image, then define content and style loss functions, which combined to calculate the total loss function and finally we ran our model and get the artistic image as output.

Once suspended, aquibpy will not be able to comment or publish posts until their suspension is removed.

Once unsuspended, aquibpy will be able to comment and publish posts again.

Once unpublished, all posts by aquibpy will become hidden and only accessible to themselves.

If aquibpy is not suspended, they can still re-publish their posts from their dashboard.

Once unpublished, this post will become invisible to the public and only accessible to Mohd Aquib.

Thanks for keeping DEV Community safe. Here is what you can do to flag aquibpy:

Unflagging aquibpy will restore default visibility to their posts.