After serving two years in the Peace Corps, I knew I wanted to join a startup, but I immediately faced a dilemma—there are too many startups from which to choose. Some early teams—like Arctype—do distinguish themselves through their overwhelming focus on product experience, which is why today, I'm going to use SQL to analyze the performance of public SaaS companies that have historically shared this focus. Through this analysis, I hope to answer the following question: are these so-called "product led growth" companies truly better? Did I make the right long-term financial decision in joining Arctype?

According to product adoption platform Pendo, product led growth (PLG) relies upon the product itself—its features, performance, and virality—to do much of the “selling”. At Arctype, we are following this strategy by focusing on the speed and developer experience of both our query editor and SQL IDE to convert users.

Naturally I was curious—are PLG companies truly better SaaS businesses? In this post I will pull data from our friends at Public Comps into Arctype to dissect the revenue, founder ownership, and payback periods of PLG companies versus average SaaS businesses. I will specifically compare these metrics between PLG and non-PLG companies:

To assemble the data for this analysis, first we have to trawl through every S-1 and 10-K and copy-paste the financials out of these 100 page PDFs into a spreadsheet. Just kidding! Public Comps pulls all this data so you don’t have to. They even provide a huge set of filters, nice formatting, exports for deeper analysis, and more. We’ll use the “PLG” filter to get Product Led Growth companies and the B2B SaaS filter to pull a broader set for comparison. 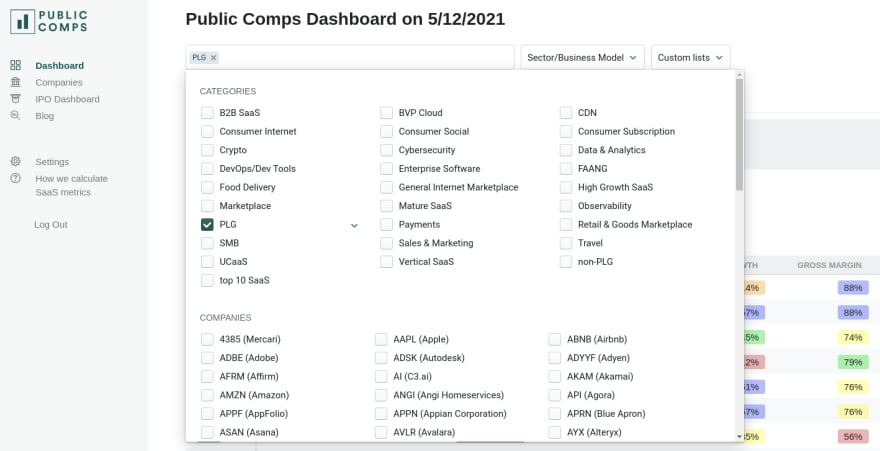 With our filters setup we can download the data as a CSV and upload it to Arctype to write SQL. For quick tasks, I usually create a SQLite database and import the CSV file containing my dataset. Want to play with the data in this post? Download the preview CSV here and access the full dataset on Public Comps.

One of the key metrics, Net Dollar Retention, is reported as a number with a percent sign appended to it and is shown as Text in the screenshot below. Handling conversion for this column will be easy enough in SQL, so it can remain set as Text. On the other hand, by setting the CAC payback column datatype to Number at this stage it won’t have to be CAST later on in our analysis.

Now that we’ve successfully imported the PublicComps dataset, we need to figure out how the data can be interpreted to prove or disprove our hypothesis. In this case, Net Revenue Retention (NRR) measures the percentage of recurrent revenue from existing customers. If every customer pays a software company the exact same amount as it did the previous year, the company would have 100% NRR. In an ideal world, customers pay more for a software product every year because the product is continually being developed and improved, leading customers to add more users or upgrade their plans. Investors love to see NRR above 100% because it means that a business can grow without selling any new software—existing customers simply pay more!

A PLG strategy naturally lends itself to higher retention because the product should include multiple upgrade pathways and viral hooks which draw users deeper into the experience and lead them to pay more and upgrade.

Products that sell themselves do not seem to do any better in retaining customers than products which are sold top down or through other means rather than user adoption and upgrades.

Fair enough, but what about ownership? We know that capital-efficient companies can reward shareholders at IPO with greater ownership stakes because they need less capital during fundraising—and thus less dilution—to achieve their goals. Dilution is always debated among companies that raise multiple rounds. To see an amazing visualization of the impact (or punch) that dilution has on the initial ownership at a company, check out this classic visualization from Techcrunch.

Taking inspiration from Sammy Abdullah at Blossom Street, as well as data from Jason Lemkin at SaasStr, Alex Clayton at Meritech, and Craft we can compile founder ownership percentages at IPO. To fill the gaps, we can also simply search for the S-1s–the SEC document that companies file before they go public–where the major shareholders of a company are reported.

With our ownership data pulled into our existing Public Comps dataset in Arctype, let’s run a similar query to the one above. In cases where the original founders did not have a significant stake or were no longer with the company, we will instead use the CEO’s ownership stake.

Greater founder ownership at IPO should mean that the business is more capital-efficient in its growth. Luckily, there is no need to guess—payback period is the number of months that a business needs to recapture the cost of acquiring a single customer. For example, if we spend $100,000 to acquire a customer that pays us $100,000 a year,our payback period is twelve months. In order to determine customer acquisition cost, CFOs will carefully calculate how many fractional sales reps, ads, solutions engineers, and other associated costs.

You know the drill by now. Public Comps has derived the payback periods from quarterly reporting data of the companies in its dataset, so we can query that and compare. 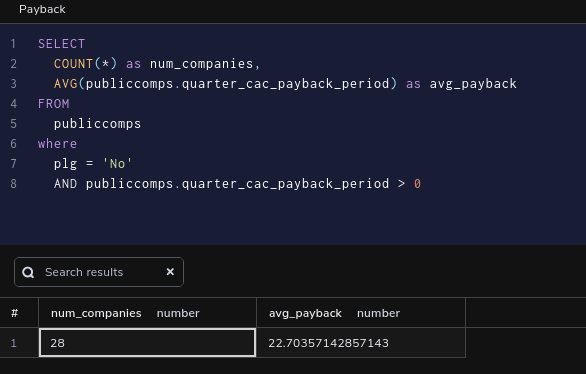 Capital Efficiency and Ownership are Better with PLG

In this post we pulled an amazing dataset from Public Comps—the go to service for making investment decisions in public SaaS companies—and loaded it into Arctype to run queries and draw conclusions about product led growth as a strategy. This dataset was relatively small but as more SaaS companies grow and ultimately go public, we will learn more about what levers to pull and what outcomes are possible.

In this initial analysis, I was surprised to learn that revenue retention is not materially impacted by a product-led growth strategy. On the other hand, the correlation between ownership levels and capital efficiency is significantly more pronounced than expected. Given this, I see every reason to continue putting our product first at Arctype with the goal of building the best SQL client in the world. And for me – well, I am feeling pretty great about my new role as a developer advocate for SQL users everywhere.

How to make the most out of #100DaysOfCode

Download Arctype
How To Use SQL Subqueries
#guide #beginners #sql
SQL Injection vs. Your Applications in the Modern Age
#mysql #sql #guide
Utilizing BigQuery as a Data Warehouse in a distributed application
#database #sql #tutorial #python