In this post, we will use Terraform and Azure DevOps to build a CI/CD pipeline which will deploy infrastructure updates to environments hosted in Azure.

This post assumes the reader has some basic knowledge of Terraform, including understanding how to plan and apply changes.

Azure DevOps is a set of services development teams can use to manage software development projects. We will use Azure Pipelines to manage our build and deployments.

We will assume the infrastructure is hosting a simple web application which will consist of:

We will use Azure PAAS services to host the application as follows:

We will define two environments, one for test and one for production. The environment topology is similar in both environments but may vary in resource count and configuration. 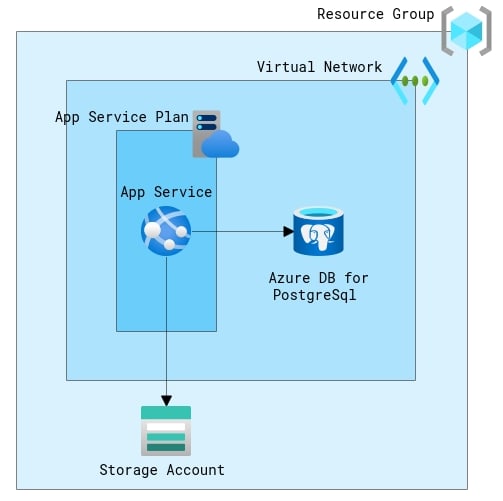 When building a CI/CD pipeline it is advisable to build once and promote the result (a single build artefact or binary) through the pipeline stages (environments). This prevents problems that may arise when software is compiled or packaged multiple times allowing slight differences to be included in the artefacts. Deploying different software to different stages of a pipeline may introduce inconsistencies. These inconsistencies may invalidate test that passed on previous stages.

Users will typically generate a separate Terraform build artefact (a plan) for each environment.

The pipeline will consist of three stages: 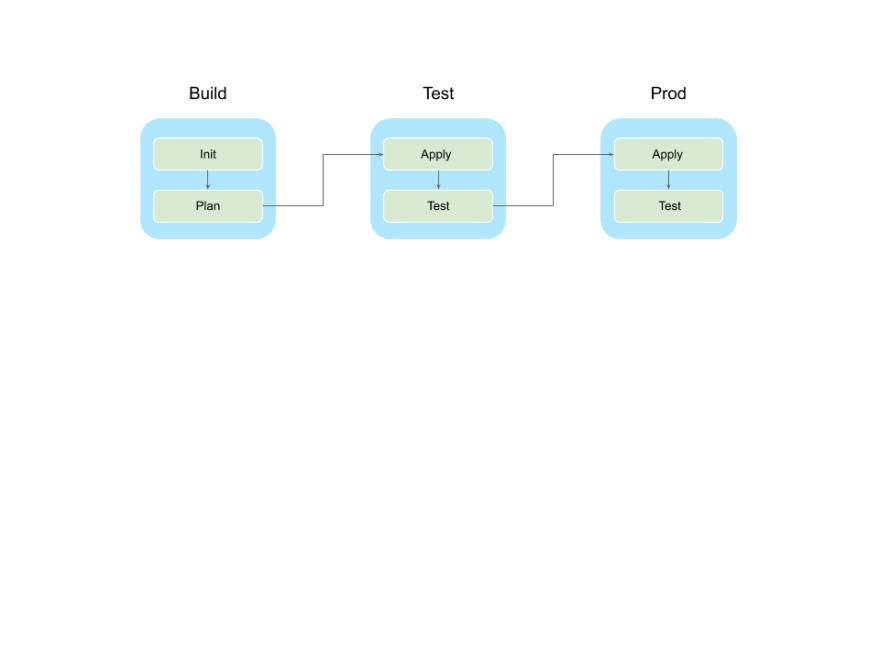 This stage will produce a build artefact that will contain a terraform plan for each environment.

This stage will apply the test plan to the test environment and execute any necessary tests.

This repository contains all code referenced in this post. As we will be interacting with Azure resources the Azure CLI should be installed locally.

We will use a module to declare global variables.

We will create a module which declares all infrastructure components needed to host the web application. Each environment module references this module.

Modules contain inputs, resources and outputs. Inputs are defined in inputs.tf as follows:

The resources are defined in the main.tf file as follows:

A module can also define outputs which can be used by referencing terraform files.

Next, we will create the environment modules, one for test and one for production. These are found in infra/azure/terraform/envs.

As we do not want to store the Postgres DB credentials in our terraform files. We will declare two input variables for these. We will pass these variables via command-line arguments as the environment modules are root modules.

We declare the terraform block, azure backend and provider in main.ft:

We then declare the web-app module and any environment-specific resources in a separate file:

The backend is initialised manually as follows:

We can now create the environments. We need to initialise a root environment module, create a plan, apply the plan and then destroy the infrastructure.

To create and then destroy the test environment, execute the following:

Please note that all infrastructure created above will incur charges.

The pipeline needs to connect to Azure to manage Azure Resources. To enable this, we have to create an Azure Service Connection. See here for more details.

We can define Azure DevOps Pipelines in YAML. The pipeline has three stages, a build stage and two release stages.

This stage will consist of a single job which executes the following tasks:

The build artefact contains the test and production environment plans. Azure DevOps will trigger the release pipeline when the build pipeline successfully creates a build artefact.

This stage will apply the test plan to the test environment. It consists of a single deployment job which will execute the following tasks:

This stage will apply the production plan to the production environment and will require approval to execute. It also consists of a single deployment job which will execute the following tasks:

We will create two environments in Azure DevOps pipelines and will configure the production environment to require approvals.

The pipeline requires the following variables:

The release stages should also execute tests to ensure the application is operational after each update. If a test fails then the pipeline should not promote the artefact to the next stage.

As we have seen, we can use infrastructure as code tools such as Terraform to automate infrastructure deployments. We have used Terraform, Azure DevOps and Azure in this example but we can implement pipelines using other tools such as Ansible or Pulumi. We can also target other cloud providers as these tools support multiple clouds.

Finally, creating CI/CD pipelines for our infrastructure has many benefits:

We can test most infrastructure changes in test environments before we apply them to production. We can also add functional and non-functional tests to the pipeline to check if the application is operational, secure and performant after each deployment.

We can use quality gates to prevent invalid updates deploying to production. If a test stage fails to deploy or additional tests fail the production environment will not change. We will create a new build to address the errors encountered in the test environment.

The pipeline acts as a single source of truth and we can use it to understand the state of our environments. We can also easily identify the commit (or commits) that produced a build artefact which can help with debugging and error triage. Finally, most build and release automation systems contain historical logs and change audit trails.

The pipeline automates all tasks involved in deploying infrastructure updates. This reduces errors that occur during manual deployments and ensures deployments are executed consistently.

If we can implement the pipeline in code (normally YAML) then we can use software development techniques to improve code quality:
• Revision code using a source control system
• Pull requests and code reviews ensure changes are valid
• Pair programming improves code quality

How do you build AWS AMIs?

How to switch to Azure kubelogin

Want to find out more about what we do?

Visit Ardanis
Angular 15: what happened to environment.ts
#angular #typescript #devops #webdev
5 Life-Changing Lessons I Learned From Being Laid Off That Will Put You Ahead Of 97% Of People
#beginners #productivity #motivation #codenewbie
Git Commit Patterns
#git #beginners #tutorial #productivity

Once suspended, ardanis will not be able to comment or publish posts until their suspension is removed.

Once unsuspended, ardanis will be able to comment and publish posts again.

Once unpublished, all posts by ardanis will become hidden and only accessible to themselves.

If ardanis is not suspended, they can still re-publish their posts from their dashboard.

Once unpublished, this post will become invisible to the public and only accessible to Brian Flynn.

Thanks for keeping DEV Community 👩‍💻👨‍💻 safe. Here is what you can do to flag ardanis:

Unflagging ardanis will restore default visibility to their posts.