Blockchain technology is a mainstream topic in just a few years. It is being used in an array of applications owing to its secure features, cost optimization, and improved efficiency. This has instigated the leaders in the government to explore blockchain technology in various projects.

The piloting and testing blockchain applications for secure payments, identity management, data sharing, etc., are being explored across the globe by agencies and government as well. As blockchain matures, we can expect new and unforeseen applications from the government in the near future.

The 2019 market report by Pioneer reports predicts that the global blockchain-as-a-service market size would reach $8.13 by 2022.

Get to know the spending of blockchain in the last year.

An overview of blockchain industry investment activity for the year 2019 shows that Asia, North America, and Europe occupy the prime positions in investment -The Block Genesis. 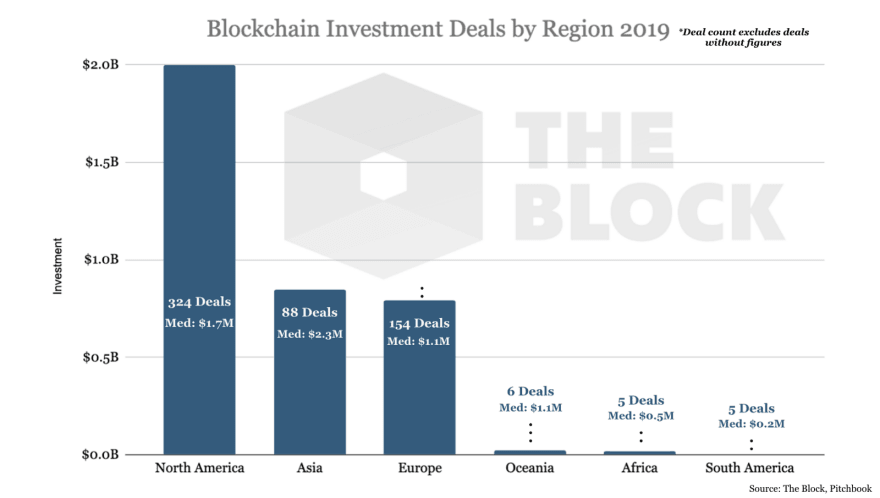 Moving forward, let us have a detailed note about the investments on blockchain technology here.

Blockchain administrations across the globe

Here is a compiled list of most recent blockchain administrations that have already launched or launching blockchain projects across the globe.

• China has submitted more than 12,300 blockchain-related patents (4,295 in 2019 alone) as per the global patent database records. The applicants include Tencent, Alibaba, and ReeChain.

• The European Horizon program 2020 program has plans to invest €300 million in blockchain projects across the Union.
India

• Draconis Capital Future Fund will invest $100 million this year in startups related to blockchain. Recently, it has invested INR 35 lacs in Ayaan Smart Systems which would roll out its product by March 2020.

• The Energy and Resources Institute (TERI) has developed a blockchain-powered platform in partnership with Noida-based blockchain and IoT start-up Sofocle Technologies limited. It facilitates peer-to-peer transactions of solar energy while ensuring security, transparency, and efficiency among the consumers. Further, India is determined to install 40 GW of electricity capacity from solar plants by 2022.

• Hipperson who founded ‘Ziglu’ has plans to process US$ 1bn in transactions in 2020, and expand the bank into the U.S. as per Financial News London. Currently, the e-money license for Ziglu is under process from the U.K.’s Financial Conduct Authority.

• The Nigerian Communications Commission, the country’s telecom regulator, has invested ~$5,500 in Wicrypt. Wicrypt enables blockchain-based WiFi sharing service which facilitates users to earn money by sharing their Internet connection. The users can deposit funds using fiat, bitcoin, ether, and binance through the Wicrypt mobile app. The hosts can withdraw their earnings in cryptocurrency or fiat.

• The Slovenia government determines to explore the blockchain technology at the country level and as part of International groups in its digitization plan called Digital Slovenia 2020.

• The Department of Urban Planning and Municipalities, Abu Dhabi – the capital city of the UAE has partnered with Indian IT firm – Tech Mahindra to put its land registry on a blockchain platform. The agency aims to provide Abu Dhabi citizens with Smart Hub, a blockchain-based solution to trace land records and reduce the processing time for real estate transactions.

• The United Nations uses blockchain to collect donations in Bitcoin (BTC) and Etheruem (ETH) through the United Nations Children’s Fund (UNICEF). Blockchain technology ensures the donators that their money reaches the destination. It follows the same principle as that of Binance’s Blockchain Charity Foundation.

• Venezuelan President Nicolas Maduro has said that at least six million families have used ‘Petro’, the national cryptocurrency as the payment method to purchase goods and services during the New Year Holidays, and #PetroApp hashtag is trending in Twitter in Venezuela.

Though there is an enormous amount of research and a larger number of pilot projects for blockchain, certain questions remain. A few of them include scalability, risk of private-key theft, data breach, lack of blockchain awareness, and social repercussions. Presently, the blockchain community is working on these issues.

Once suspended, ariaareeds will not be able to comment or publish posts until their suspension is removed.

Once unsuspended, ariaareeds will be able to comment and publish posts again.

Once unpublished, all posts by ariaareeds will become hidden and only accessible to themselves.

If ariaareeds is not suspended, they can still re-publish their posts from their dashboard.

Once unpublished, this post will become invisible to the public and only accessible to Ariaa Reeds.

Thanks for keeping DEV Community safe. Here is what you can do to flag ariaareeds:

Unflagging ariaareeds will restore default visibility to their posts.