The demand for blockchain developers, as per a LinkedIn report has multiplied by 33 times in the last couple of years, given their increasing need off late in multiple industry sectors. The fintech sector has been the biggest beneficiary of the application of blockchain technology over the years. But, in the recent past, many other business sectors have come to realize the business benefits that are attainable from the use of the said disruptive technology. 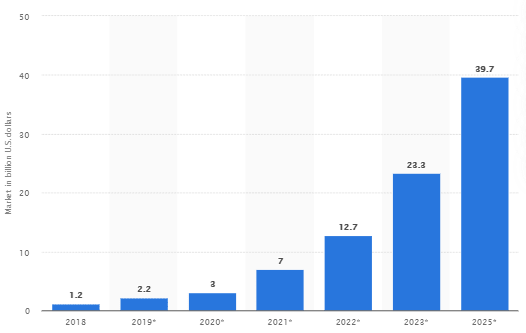 Besides, a career in blockchain in 2021 would promise fast career growth alongside bestowing upon you pretty handsome monetary benefits. The yearly salaries of blockchain developers and engineers in the US, at present, range between USD 70,000 and USD 200,000, with the average being $136,000. As a matter of fact, blockchain wallet users grew tremendously during the time period between 2015 and 2018, from 3 million to a whopping 28 million. Blockchain skills are ranked among the 20 fastest-growing professional skills, as per a number of reputed research publications.

What Does a Blockchain Developer Do?

A blockchain engineer possesses the knowledge to create and hone decentralized apps and smart contracts while following the standard blockchain development protocols. Blockchain developers also perform 3D content development, 3D design, and 3D modeling. However, the work differs based on the nature of work, and the industry a developer works into.

In other words, a blockchain developer’s duties comprise managing the entire life cycle of a blockchain application, starting from research & analysis, to design & execution. These professionals have to leverage multiple programming languages to develop features, architecture, and interfaces for different sorts of purposes, e.g. monetary transaction processing. Aspirants can enroll in industry-relevant blockchain certifications to gain skills that are in demand at the moment.

How to Train Yourself Becoming a Blockchain Developer?

Understand the basics of blockchain technology

Hands-on Learning is a Must

Being a prospective blockchain professional, you need to have hands-on experience with the development of blockchain applications. What you can do for that is, download the already existing apps and wallets and try learning how they operate or work. Spend time creating and using private keys and wallet addresses, learn transferring value like crypto over multiple blockchains.

The other critical things to acquire hands-on experience in, would comprise understanding and interact with smart contract platforms and exchanges, learning data, and transaction recording. For aid, an aspirant can network with current blockchain developers on the online forums. Remember, the blockchain industry is growing big with each day passing by, hence, a plethora of job opportunities on hold for you. Just acquire the requisite skillset, and you will be welcomed on the commercial side of the blockchain world.

Blockchain technology is a practicing art. You will never be good at it unless you practice it much. Coding is an integral part of a blockchain professional’s work life. And that’s why, as an aspirant, you must prepare and practice it as regularly as possible. Learn the fundamentals of programming languages such as Javascript and C++, and also ensure understanding the application part of it, i.e. how are these languages going to contribute to blockchain coding. Learn about the coding languages that are the most compatible with optimizing blockchain performance. Code analysis is another vital facet of blockchain development that you should learn.