In the beginning, websites were entirely made out of HTML and they could only display text (back in the early 90’s, computer monitors only supported 16 colours). The browser was downloading the HTML document, render it and in the end the content was displayed on the user's screen. There was no way to change that text, so in a way we could say it was set in stone.

But people wanted more than displaying boring text so they started creating interactive sites. Internet Explorer was released and Javascript was developed in 1995. This new exciting scripting language started to be used for webpages but the interactivity provided was very limited since UIs were generated using HTML and HTML couldn't be changed after the files were downloaded (that very limited interactivity eventually became known as DOM Level 0 or Legacy DOM).

From the need to be able to change the UI after the page was loaded (add, remove, edit or move elements around in the HTML document), the first standardized version of the DOM was born in 1998 and it was called DOM Level 1. Changing (manipulating) the DOM suddenly opened the door for infinite possibilities. We can now create applications that are customizable by the user, that react on user's input or even update the data we see on the screen without refreshing the page (so no extra trips to the server are needed). We can drag or move elements across the screen, delete some of them or add new ones if that's what we want.

Some concrete examples of DOM manipulation are:

The Document Object Model is a cross-platform and language-independent interface that treats an XML or HTML document as a tree structure wherein each node is an object representing a part of the document. The DOM represents a document with a logical tree.

In simple terms this means that after the browser downloads the HTML document, it converts its content into a tree like structure called the DOM (Document Object Model) and stores it in its memory.

IMPORTANT
The DOM is not a programming language and it's not a part of Javascript. It is one of the multiple web APIs built into web browsers and it has been created to be independent of any language (think of web APIs like they're collections of functions). Implementations of the DOM can be built using other scripting languages besides Javascript and every non-empty webpage has a DOM, even the ones that don't use any Javascript. You don't have to modify the DOM if your pages display only text for example, but if you want interactivity, you will probably need to work with the DOM (some of the same interactivity Javascript offers can be achieved using CSS, but this is another topic).

Things might sound a bit abstract so before going any further, let's see how this DOM actually looks like. We have a very simple HTML code snippet:

Below we can see how the DOM for the above HTML code looks like (if you want to play around with this visual representation, you can use this Live DOM viewer). 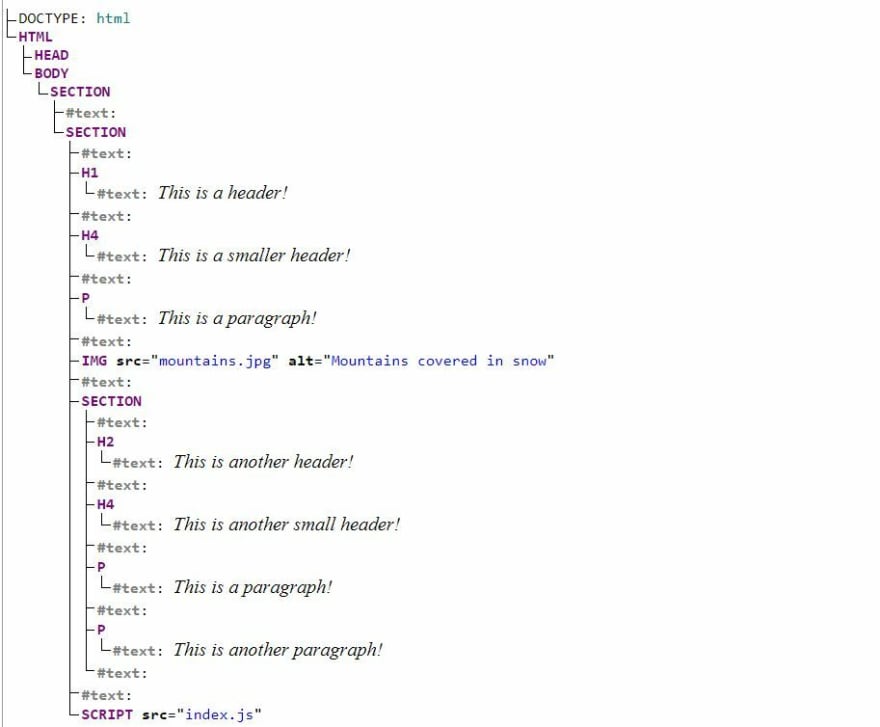 So this is the tree-like structure the HTML gets translated to. The tree is made out of nodes. Some nodes represent HTML elements (HTML, HEAD, BODY, SECTION etc) and other represent text (the ones represented as #text). A complete list of all node types can be found here.

Based on its position in the tree, a node can be a:

Root node
This is the top node of the tree, which in the case of HTML is the HTML node.
Parent node
A node which has other node(s) inside it. For example, BODY is the parent node of all nodes inside it.
Child node
A node directly inside another node. In our example, the H1 node is the child of the SECTION node.
Sibling nodes
These are nodes that are found on the same level in the DOM. H1, H4, P and IMG nodes are all siblings since they are on the same level inside the SECTION node.
Descendant node
This is a node that can be found anywhere inside another node. H4 is for example the descendant node of the BODY.

What does manipulating the DOM means? It means we can change the nodes in the tree we've just seen, making use of APIs that can control the HTML and the styling of a page. Each node has its own properties and methods that can be manipulated using Javascript. 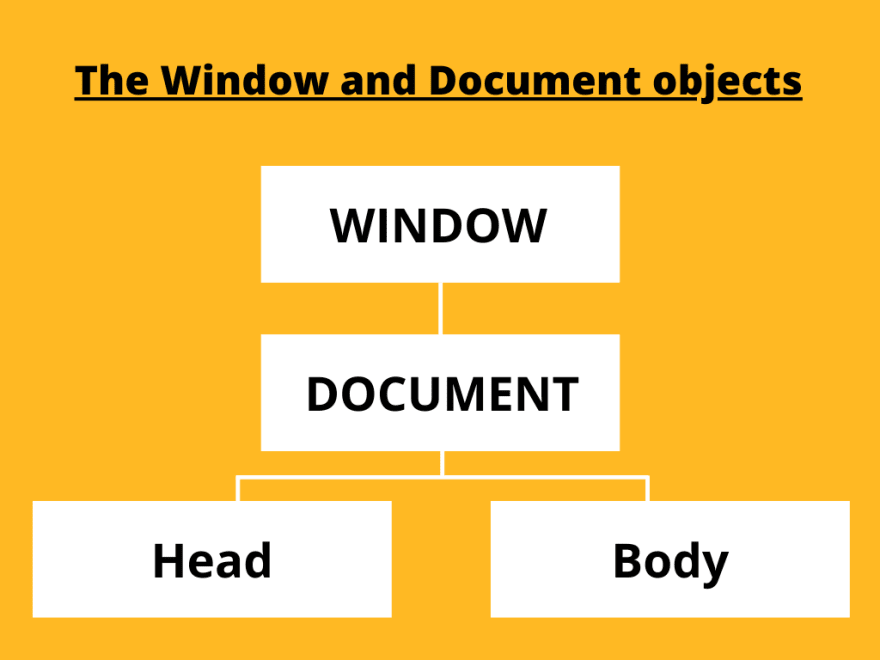 1.TARGETING NODES
In order to interact with any node in the tree, we first need to target (select) it. We can do this using one of the multiple methods the DOM API offers (notice that all these methods are called on the document object using the dot notation):