This certainly isn't the first time someone's made a list of their favorite VSCode extensions and it won't be the last, but these are mine! I'll start with some of my favorite JS related extensions and then we'll jump into HTML/CSS helpers.

I'm starting with the holy grail of all extensions. This one, I swear, has saved my life.

This extension does exactly what it's name says. It might not seem like anything life changing, but think about working with some deeply nested code, or a huge file. 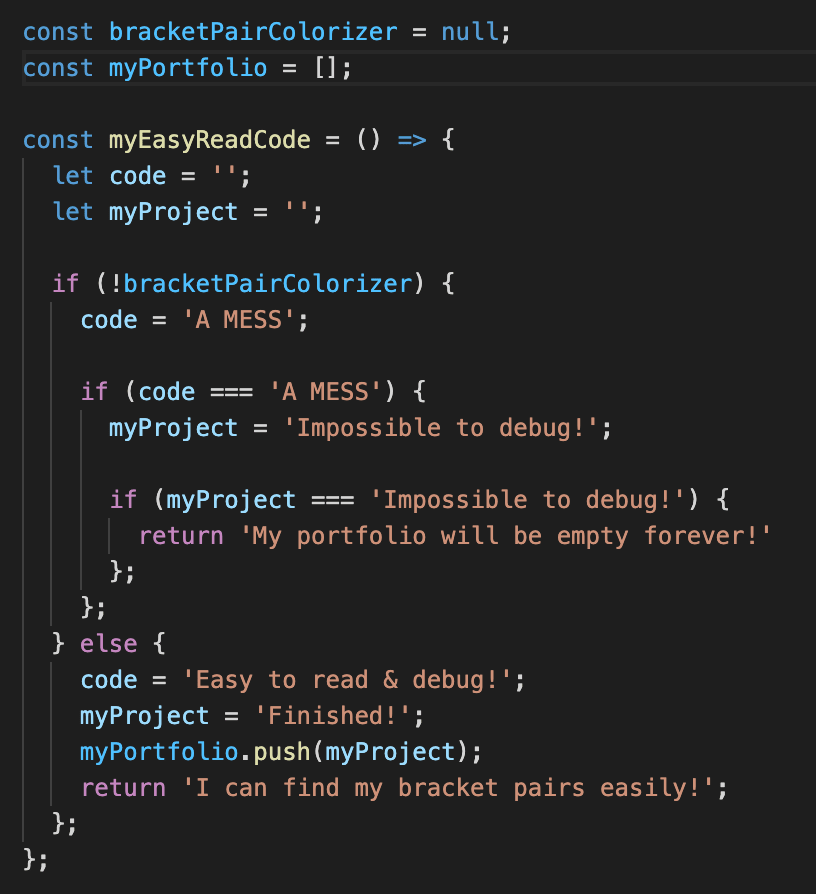 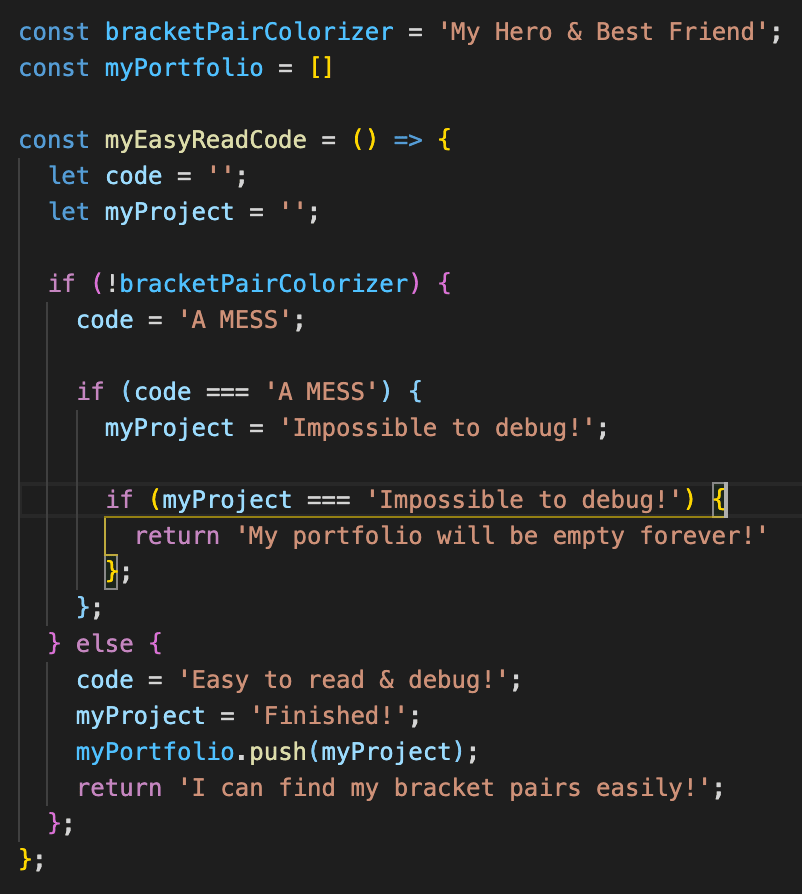 Each pair of brackets, curly brackets and parentheses has its own color, which makes it very easy to identify where you might have an 'oops'.

Wow, this already seems AWESOME, but WAIT-- there's more. Moving your cursor to the inside of the first bracket draws a line (in the same color) to its partner.

Both of these extensions have a ton of snippets, but I don't have the time to make that many gifs!

JavaScript (ES6) Code Snippets
This one is very similar to Simple React Snippets, but applies to plain 'ole, vanilla JavaScript.

These are the ones I use most often, but there are a ton more. Notable mentions include:

This one is small but mighty (helpful). Anytime you type ${} within a set of single or double quotes, this extension automatically converts them to backticks.

VSCode is pretty great with HTML & CSS all on its own. * You can use html:5 to get some solid HTML boilerplate.

There are a few good helpers out there though!

Wrapping already written code in a new tag has been driving me insane for as long as I can remember, but now there's an answer. Highlight, ctrl + i and the nightmare is over.

The length of this list of snippets is rivaled only by a Game of Thrones book.

Last but not least, Live Sass Compiler! Sure, sure, you can just get this up and running in your terminal with a command or two, OR you could just click this:

Totally up to you, but I know what I'd rather do.

That's it for my favorite extensions list (for now). Feel free to drop your favorites in the comments! I'm always looking for new gems in my extension treasure collection.

Once suspended, arynnboniface will not be able to comment or publish posts until their suspension is removed.

Once unsuspended, arynnboniface will be able to comment and publish posts again.

Once unpublished, all posts by arynnboniface will become hidden and only accessible to themselves.

If arynnboniface is not suspended, they can still re-publish their posts from their dashboard.

Once unpublished, this post will become invisible to the public and only accessible to Ronnie.

Thanks for keeping DEV Community safe. Here is what you can do to flag arynnboniface:

Unflagging arynnboniface will restore default visibility to their posts.