There are a lot of choices.

Let us dive in.

You can find all the code presented in this blog post in this GitHub repository.

Till recently, a typical AWS deployment using GitHub Actions might have looked similar to the following, simplified diagram. 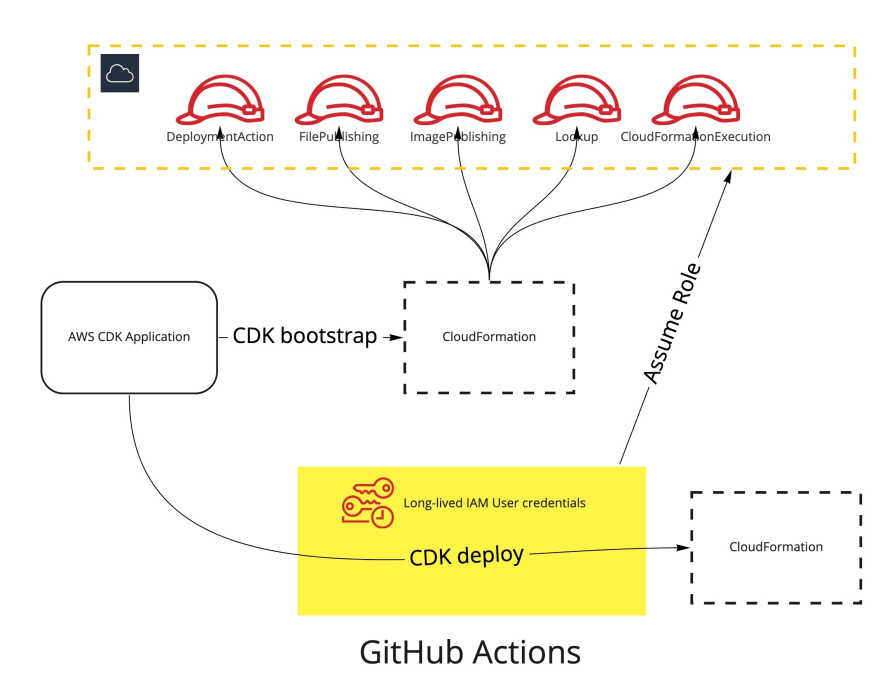 To deploy the underlying application, one had to keep the long-lived IAM user credentials within the GitHub repository/organization secrets. While this setup certainly does the job, it leaves a relatively big security gap in our environment.

Let us explore why we should be moving away from IAM users in such scenarios next.

What is the issue with AWS IAM users

People who know much more about security than I do, like Ben Kehoe, have been advocating for abandoning the use of IAM users for most use-cases a long time. I completely agree with their arguments.

Ask any security professional if they would be more comfortable with long-lived or short-lived revokable credentials. I'm willing to bet a large sum of money that they would pick the latter option. The access keys are long-lived! Imagine an attacker getting a hold of those. They would be able to wreck your infrastructure. Not ideal.

Luckily an alternative appeared on the horizon recently. Let us explore that topic further.

We were pretty much stuck with the IAM user setup when deploying AWS CDK applications for the longest time. All has changed when GitHub announced support for OpenID Connect for GitHub actions.

Now, instead of relying on the long-lived IAM User credentials, we can use the AssumeRoleWithWebIdentity AWS IAM call to get short-lived IAM role credentials to deploy AWS CDK applications. Neat! 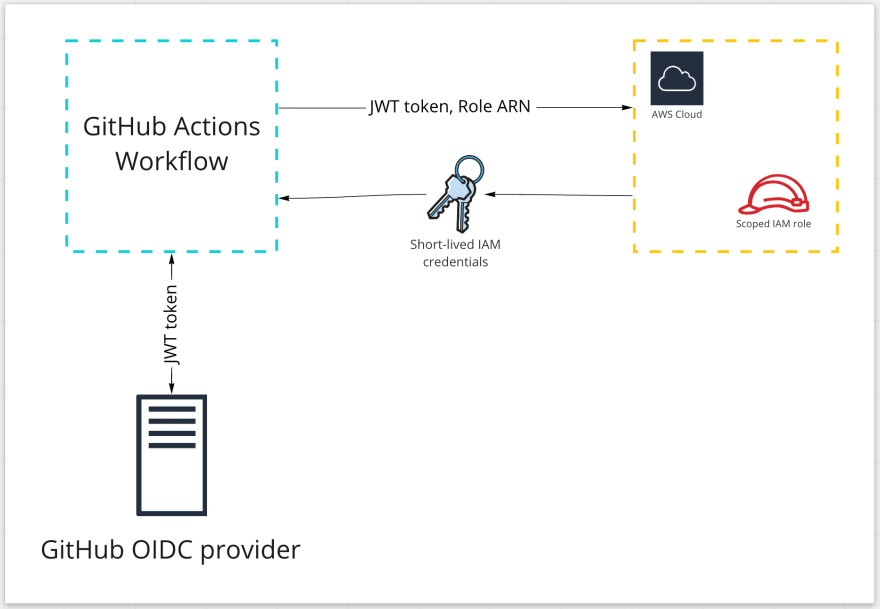 Let us see, step by step, what goes into making this setup work.

Moving to the concrete now – the following is an example of how one might set up GitHub AWS CDK deployment pipeline to leverage the short-lived credentials utilizing GitHub OIDC provider.

The AWS account is a great way to reduce the potential blast radius when things go wrong. As a matter of fact, AWS recommends using multiple AWS accounts to achieve resource independence and isolation.

Please note that if you are deploying relatively simple architectures, you do not need separate accounts here – it might be an overkill. If you are not interested in the multi-account setup, read on. I will show you how to do all we discussed today using a single account.

Creating a custom OIDC provider using AWS CDK is a breeze. The iam.OpenIdConnectProvider class is a great abstraction over the AWS::IAM::OIDCProvider AWS CloudFormation resource.

The following AWS CDK code will create a custom AWS IAM OIDC provider that developers can use in the context of GitHub Actions.

Github has a great guide on how to integrate their OIDC provider with AWS. Give it a read!

As I eluded earlier, we will use the "deployer" role to deploy our main AWS CDK application. This role has to have a trust relationship with the custom OIDC provider we have created earlier – otherwise, we would be unable to assume it during GitHub Actions run.

There are two essential things to notice in this code snippet.

With the stack deployed, copy the ARN of the applicationDeployerRole – you will need it later.

Let us move to the "application" stack.

By default the AWS CDK bootstrapping process creates, amongst other resources, five IAM roles related to the deployment process.
You can learn more about them in the AWS Documentation – mainly the "Roles" section. 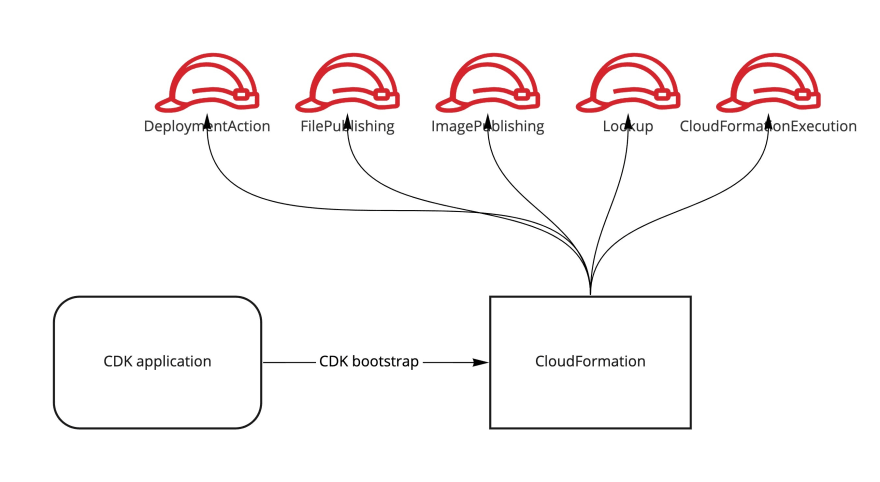 What is more, those roles have a trust relationship with the whole AWS account the stack was bootstrapped it (configurable). This makes it so that, in theory, an untrusted IAM entity could deploy the application at will.

We will change the AWS CDK bootstrapping template so that only the "deployer" role can assume the roles AWS CDK creates.

Let us get started.

Check out the AWS documentation for how to customize AWS CDK bootstrapping process further.

The first step is to get the bootstrapping template. Luckily AWS CDK bootstrap command exposes the --get-template flag.

The second step is to amend the trust relationship of the roles in the bootstrap template. Instead of having the whole AWS account as a principal, we will set it to the "deployer" role ARN.

For example, here is the unmodified expert from the bootstrapping template containing the FilePublishingRole.

To amend the trust relationship so that only the "deployer" IAM role can assume it, change the value of the AWS key under the Principal.

With the bootstrap template modified, we can run the cdk bootstrap command with a special flag. This flag will tell the AWS CDK to use our modified template as the source of truth for AWS CloudFormation.

When the bootstrapping process is successful, we are ready to move into creating GitHub Actions workflow and deploying our application.

Okay, it's time we make the last push and deploy our application for the whole world to see. As per the title of this blog post, I will be using GitHub Actions to do that.

Our workflow file will be rather simplistic.

This is where they come into play. If we specify a different repository or branch, the Assume deployer role step would fail – the aws-actions/configure-aws-credentials@v1 would not be able to get short-lived credentials. The sts:AssumeRoleWithWebIdentity call would fail due to conditions mismatch.

If we configure everything correctly, all of our jobs should run successfully.

I do not want to use multiple AWS accounts

You might not want to use a separate account for the "infrastructure" stack, which is entirely understandable. In this case, let us look at what kind of modifications we would have to do to make our deployment work.

By default, AWS CDK will re-use resources created by bootstrapping process if you deploy multiple AWS CDK stacks in the same account.
We do not want this to happen as we would not be able to change the trust policies on the roles bootstrapped by the "application" stack.

The rest of the process is the same as in the case of a multi-account setup.

There are many ways for deploying AWS CDK applications. This blog post aims to show you one of them – using GitHub Actions. I hope you found the setup valuable and helpful.

Thank you for your valuable time.

Cook a recipe with AWS: A simple Web application which calls a webservice and displays result, using AWS Amplify

Once unpublished, this post will become invisible to the public and only accessible to Wojciech Matuszewski.