Don't forget to follow the #playwright tag on dev.to for more community-authored articles on Playwright!

Playwright is an open-source framework for Web Testing and Automation. It enables reliable end-to-end testing for modern web apps across browsers and platforms, using one API! Playwright supports resilient testing (with features like auto-wait, web-first assertions and tracing) with powerful tooling for authoring, debugging and profiling your end-to-end tests!

In our last post we looked at how to setup a demo app as a real-world testbed for Playwright. See the source code and visit the running site for reference.

Today, we kick off a series of "Tool Talk" posts that use this app as a sandbox to explore authoring, debugging, profiling, and command-line, tools provided by the Playwright framework. Our tool focus today: Trace Viewer!

Here's a handy visual guide to the Trace Viewer docs. You can download the hi-res image here or see a time-lapse of how this was created here 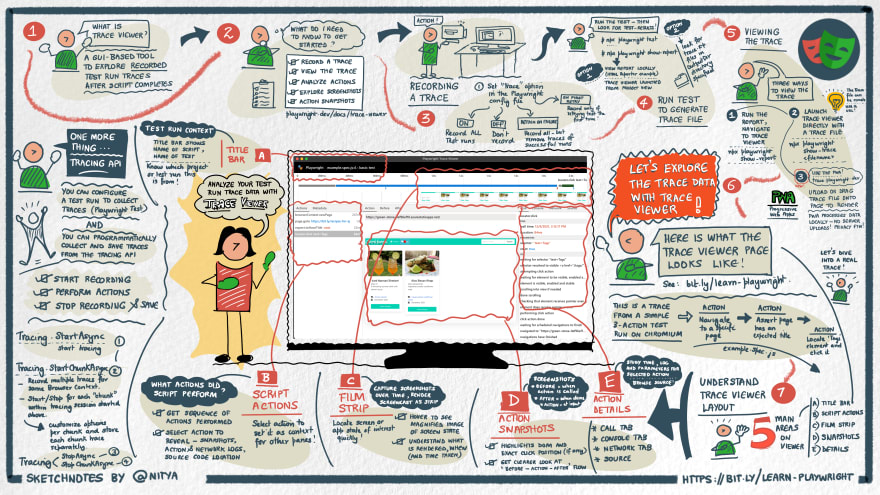 In the last post we built and deployed a recipe blog app, and configured GitHub actions to automate the build-deploy-test workflow. As part of that process, we did a couple of things that relate to this post:

Today, we want to dive into that last part and understand what "show report" does, and dive into details on the Trace Viewer tool that plays a key role.

First, let's take a quick look at the project's playwright.config.js file to understand the default configuration settings. I've deliberately omitted a lot of the details from that file and highlighted only the options relevant to today's post:

Let's look at the these options in more detail:

Our customized test script is contained in a spec file (example.spec.js) and defines a single test (basic test) executed for three projects (targeting chromium, firefox and webkit) - as configured in playwright.config.js.

If you list the local directory, you'll now find two new folders created: test-results and playwright-report. Let's take a look at what these contain:

The playwright-report directory (above) contains folders with the data per project run (zipfiles), a trace viewer app, and a landing page (index.html) that can be served locally for viewing reports (show-report).

Check the tweet for a video walkthrough of the report (or grab the file here!)

Alright - this @playwrightweb reporting output is pretty nifty - and I love the built-in trace viewer too. Now you know what my next blog post is all about right?

Bonus: trace.playwright.dev is a PWA - use it load/view trace files anytime locally (data not sent to server) 🎭

The HTML Report landing page (shown below) has one (collapsible) section per project test run. It comes with a built-in search bar (for easy filtering and discovery) and has color-coded tags for each browser target (click on tag to scope list down to only tests run on that target type).

Clicking on a particular test (e.g., the chromium record) takes you to the detailed report for that run (shown below) - listing the actions run and time taken for each, along with a link to its trace.zip file (since we configured Playwright to record all test runs). 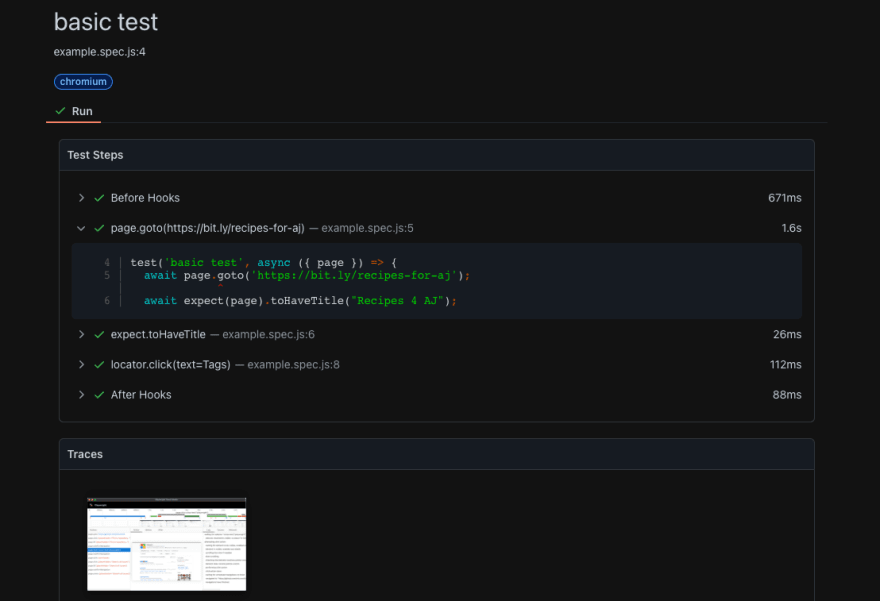 Click on the trace file - and we get to our intended destination for this post! I've linked an annotated screenshot of that page below, so we can dive a bit into what this does in the next section. 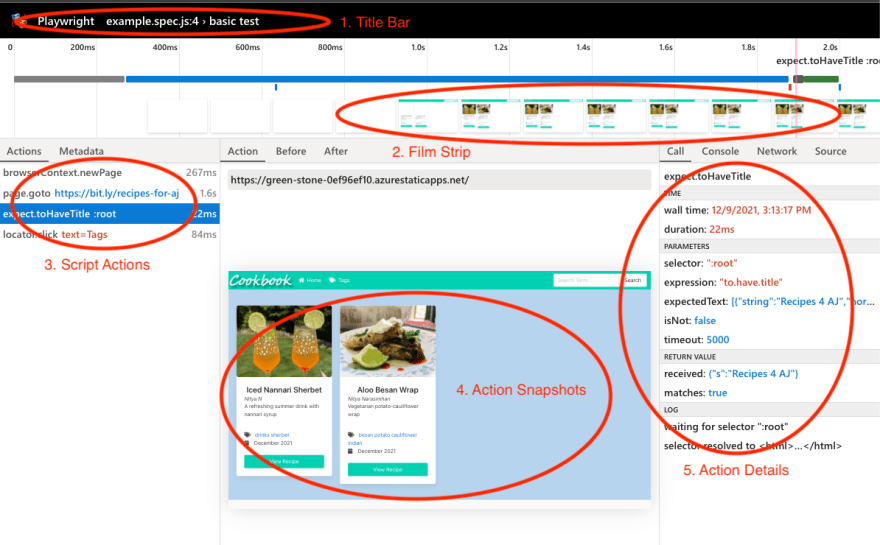 🚨 | I've saved the trace file here so we can explore this further next!

Trace Viewer is the built-in GUI-based tool in Playwright that lets you view and analyze the recorded traces from a test run. We already talked about recording options in the configuration file - and know that the trace will be stored in a trace.zip file under the relevant project run subfolder.

Now let's talk about Viewing options - there are three ways to get to the Trace Viewer page to explore the trace file from a test run.

In the last case, try using the previously-stored trace file and see what happens:

You should see a Trace Viewer window popup similar to the screenshot above - allowing you to view and interact with the trace data. This is a great way to analyze an archived trace, debug it collaboratively in a group project.

But wait - there's now a fourth option:
Visit trace.playwright.dev in your browser and drop the trace file to activate the Trace Viewer. This is a great option if you are on a device that does not have Playwright installed, and you have a trace file to analyze.

Want to try it out?
Download the saved trace file from before, then open trace.playwright.dev and drag or upload this zipfile into the specified location on page.

This feature was announced recently (skip to the 11:44 mark in the video below). Most importantly, it's a Progressive Web App which opens the trace file locally (no sending trace data to servers) to preserve data privacy.

Refer to the screenshot above that shows the Trace Viewer page launched from the HTML report - or watch the screencast for an interactive walkthrough.

The viewer layout has 5 main areas:

Slide over the strip to see when different elements get rendered, to enable reliable testing. For instance, this trace showed me that font-awesome icons get rendered a fraction of time later than the associated labels.

And that's it! Visit the Trace Viewer Documentation for more updates.

We covered the Trace Viewer tool in today's Tool Talk post. Tomorrow, we'll check out Playwright's support for Test Reporters - from learning available options, to using them effectively (including in automated workflows) - and even building your own custom reporter using the Reporter API.