This blog post is part of a series on "deploying a Spring Boot and Angular application on Azure", here is the full list of posts:

Scaling out with Azure Web Apps

Since the beginnings of this series, we have used the "scale up" option of Azure Web Apps. As we have seen on part 3, we are able to change the instance that we use on-the-fly, so we can scale up (or down) depending on our load and budget. This is also why we set up Azure Application Insights on part 4, in order to better understand our needs.

Now, a better solution for scaling would be to "Scale out": instead of replacing our instance by a bigger one, we are going to add more instances. This allows for greater scalability (at some point you can't buy a bigger instance...), and is much more cost-efficient as we will only run the number of instances we need, automatically.

For this, Azure proposes a "Scale out" option which is just under the "Scale up" option, and where you will set up rules to scale out. For example, here we have defined a rule: when 70% of the CPU is used for more than 10 minutes, then we'll automatically launch new instances, with a maximum of 20 instances:

This setup will allow our application to scale up (and down) automatically, depending on our workload. But this is only one part of the problem.

The database is the problem

Scaling out is awesome, but most of the time performance issues come from the data store. As we have worked on this issue for decades, this is the reason why the JHipster team focuses so much on using a cache, as it's the best way to eliminate this data store issue.

Let's see what our options are in terms of data store performance:

The last two options are clearly the best for our use-case, but they both require us to have a distributed caching solution, otherwise as soon as our Azure Web App instance scales out, we will see some invalid data.

In Java, we usually have 3 kind of caches:

Several well-known solutions exist, and are typically supported by JHipster:

Here, we are going to use Redis, which is a well-known in-memory data store that is often used as a cache. Compared to Hazelcast and Infinispan, it has some unique options:

What is Azure Cache for Redis

Azure Cache for Redis is a fully-managed Redis cache, hosted by Azure.

It has a very inexpensive first tier, as you can get a cache for about $16 per month, and of course it can grow to a huge, distributed cache with geo-replication if you spend more money. You can find all pricing details here.

For our current use-case, it's a very good choice as we tried to be budget-conscious, and as it can scale out without any trouble for us.

If you want more information, here is the complete documentation on Azure Cache for Redis.

Setting up an Azure Cache for Redis is easy using the Azure portal, just use the search box to create it (and be careful to select to correct instance, as prices can go up quickly!): 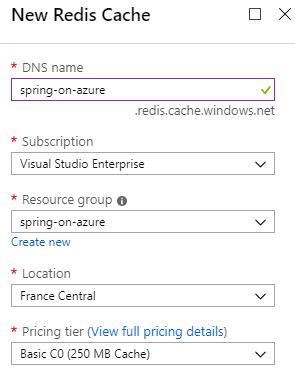 Using Redis, there are several Java libraries available both to support Hibernate 2nd level cache and the Spring Cache abstraction:

For this post, we will use Lettuce as it is the default option with Spring Boot, and as it seems indeed to be the best fully open-source option.

First we added the spring-boot-starter-data-redis library to our pom.xml:

Then we added a specific Spring Boot configuration class, so Redis only works in production mode. In development mode, everything will work the same without the cache, and that will make our development setup easier:

And we configured Redis in our application-prod.yml Spring Boot configuration file:

Important note : many people use unsecured Redis instances, typically because their Redis library doesn't support SSL. The above Yaml configuration shows you how to do it correctly: please note that Azure Cache for Redis uses port 6300 for SSL, and also that its non-secured port is disabled by default (but there is no excuse to enable it now!).

In order to test our code, we also added some cache in a REST method of the ProjectResource class:

This is only for testing, as you will quickly have cache invalidation issues with this code (you'll need to use the @CacheEvict annotation to have a working cache), but it will make it easy for you to test that your cache works well.

Once this is done, you should be able to monitor your cache through the Azure portal: 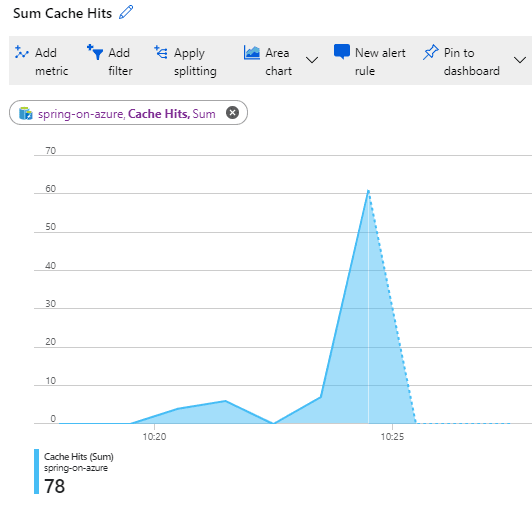 All changes done for this blog post are available on this commit.

Animating React App in Less than a Minute