It becomes more and more common today to develop as well as deliver your application in one or more containers. One of the most common containerization software’s out there is Docker. It’s a great tool making it very easy to create image as well as containers and also monitor the same. Wouldn’t it be great if we could continue using Docker and bring our app to the cloud

In this article we will do the following:

In case you've missed the links we are mentioning in this article. Here they are:

The promise of the cloud

Using container technology allows us to split up our application into many services. On top of that, it offers a secure and reliable option to deliver the application. Now comes the next question, where do we deliver it to, On-premise or maybe to the Cloud?

This article is about delivering your application to the Cloud so of course, we are a little bit biased. Let me explain in a few short points why we think the Cloud is a great place for your app:

You will need the following installed

We said initially we would focus more on how to deploy rather than write an application, so for that reason, we are going to use a pre-made application that you can pull down from here:

Looking at it you can see that it is a very simple Node.js application running Express. There are two files of interest in the Repository for the sake of our demonstration:

Let's have a look at the app/index.js file:

Above we can see that it’s pretty standard Node.js + Express application, no magic here.

Lets now have a look at the Dockerfile:

It does the following:

All in all, this is a pretty standard looking Dockerfile.

Building an image is pre-step we need to do before our application can actually be started. The build step will pull in the OS image we ask for, download dependent library, copy our app code in its place and so on.

We can use the docker build command to build an image. The exact command we will need to use is:

The above command looks for the Dockerfile in the directory /aci-helloworld and creates an image called aci-tutorial-app. Running the command should yield an output looking like this: 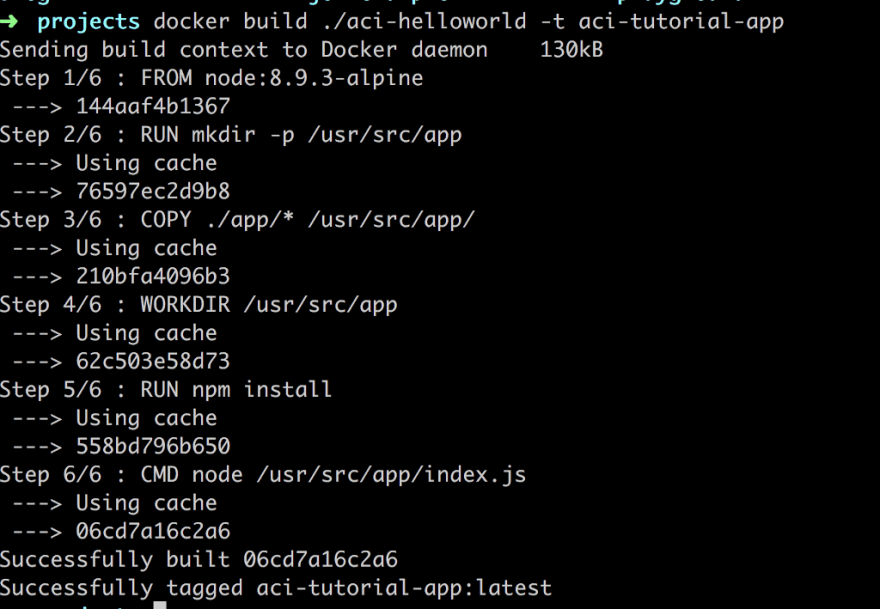 Above it’s showing us all the steps that we set up in the Dockerfile like:

We can see our created image if we run the following command:

Ok, then, we have an image which means we are ready for our next step; testing it locally.

Test the image, by instantiating a container

Now that we have an image, we can create a container from it, using docker run. The full command looks like the following:

Let’s look at the arguments:

We can see that the external port is 8080, which means we can navigate to

http://localhost:8080 to ensure our application works.

This is the image we get, so I would say our container is working:

With the following command we can list all the running containers:

docker ps It should present the following result:

We don’t want a container running and using up resources so let’s shut it down. We want to run the command docker kill to shut down the container, however, that command needs an argument, it needs the container id. Remember when we run docker ps? The first column was our container id. We don't need the full id though, it suffices with the 4 first characters. So let's kick off our command

docker kill [container id, 4 first characters] docker ps // it should be an empty list That’s it. Here is a screen dump of the commands we just ran:

Azure Container Registry is your private Docker registry in Azure.

We need Docker, Docker Engine and Azure CLI for this to work. We have already installed Docker at this point so let's see how we can install Azure CLI:

Before we can create said registry we will need a Resource Group. A Resource Group is a logical container in which we need to place all our resources like Applications, Databases and now Resource Group. Everything in the same group can easily and securely communicate.

so let’s create that first:

Once this Resource Group is created we can go back to creating our Container Registry.

Let’s break it down a bit.

Is the actual command to create our Container Registry. Then we need some arguments:

You should get an output looking like the following:

The important part is getting a provisionState back with value Succeededed.

We need to log in to our registry before we can push docker images to it. So let’s log in:

That should tell you Login Succeeded if all is well

Above you can see that I opted to call the registry chriscontainerregistry put you would have to replace that with your chosen name.

To push a container image to a private registry like Azure Container Registry, you must first tag the image with the full name of the registry's login server.

That’s something you can find out by looking at the JSON output when you created your registry. You are looking for a property called "loginServer". It has the format of [your registry name].azurecr.io. In my case, that would be chriscontainerregistry.azurecr.io.

So either you remember the name of loginServer, from when we created our container registry or you can always retrieve the loginServer later by calling this command:

This will give us the loginServer name printed in our terminal. Of course [container registry name] would in our case be the value chriscontainerregistry, so adjust accordingly depending on your chosen name.

Let’s now head back to Docker. We need to Tag the aci-tutorial-app image with the loginServer of your container registry.

We tag it with the following command:

Run docker images command at this point, to verify it was correctly created. It should look something like this:

Push the image to the repository

Now we can actually push the image to the repository. We do so by executing the following command:

and with all the correct values in place, it would be:

You may need to log in first, in which case you run the following command:

Carrying out the docker push should render the following result:

Ok, so now we actually want to see what images we have in there, spoiler there should be the one we just uploaded ;)

We can run the following command:

Using the correct value for acrName it would look like this:

There it is, our only pushed image :)

To run our deploy command we first need a little info, namely the following:

Ok, now we come to the deploy command, that might look a little bit intimidating:

There are a ton of ways to create a container, if you are interested in other ways, have a look at this link az container create

If it takes a while to deploy you can check status meanwhile, with this command:

After a very long JSON response back, look for provisioningState: Succeded, if you have that you are good.

Let’s have a look at our container with the following command:

We can see the logs from the app by running:

This will tell us running on port 80

Once it’s deployed we can visit the app on the --dns-name-label value, like so:

We set out to deploy an app. This time we wanted to deploy a docker container. For that, we first needed to create a docker image. So we created one using docker build.

Then we realized we needed an Container Registry, cause it was from there we would deploy our Image, i.e instantiate a docker Container and deploy it.

To make it end up in the Container Registry we first needed to tag it with the loginServer name, after that we pushed the tagged image.

Lastly, we told the Container Registry to create a container from our image and deploy it. Once deployment was done we could go to our browser and verify the app was there, success :))

It wasn’t that many steps really. I mean let’s say our app consisted of 3 other services. We would only need to build an image for each, tag it, push, and create a container.

Scripting with VSCode Tasks and Typescript