Attention all makers, students, tinkerers, hardware hackers, and professional IoT developers! The month of #JulyOT is here!  To celebrate, we have curated a collection of content - blog posts, hands-on-labs, and videos designed to demonstrate and teach developers how to build projects with Azure Internet of Things (IoT) services.  This content ranges from video demonstrations of real-world solutions, a 5-part series on developing an Intelligent Video Analytics service, an IoT bird-box project for families, Raspberry Pi air quality monitor backed by Azure IoT Central, and a self-guided training series designed to help study for the Azure 220 IoT Developer certification.

All of this content will be made available on this IoT Tech Community page. It is highly recommended that you bookmark this page as we will update it with new content each week during the month of #JulyOT! In this post, we would like to give a rundown on what you can expect from #JulyOT and how you can contribute to the fun!

JulyOT was born out of a desire to celebrate all things IoT in an accessible way to enable developers around the world to build innovative projects with connected devices. Do you have an idea can be brought to life by connecting a device to the internet? Are you interested in exploring Artificial Intelligence at the Edge or building something innovative with sensors and hardware? We want to hear about it! We will be monitoring the #JulyOT hashtag to actively promote and encourage projects built by the community throughout the month of July. All you need to do is have an idea for an IoT project, then tweet it out and keep us updated on progress by including the #JulyOT hashtag. We’re open to all projects that involve a thing and the internet, so don’t feel afraid to share, we want to inspire everyone to build something cool in July! 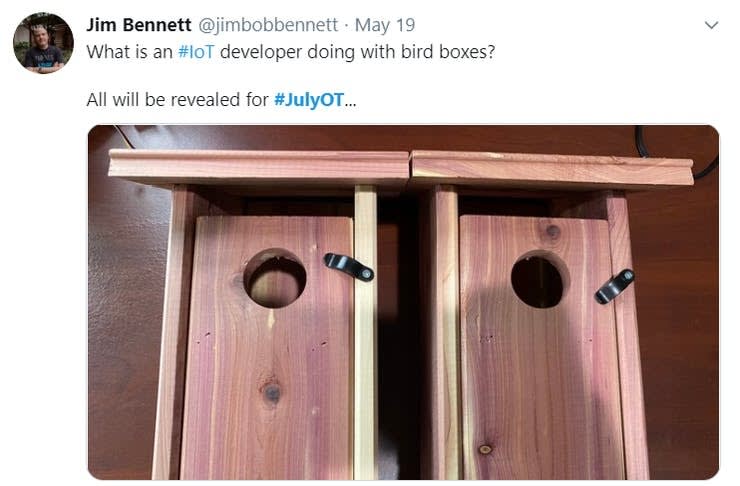 During each week of #JulyOT, we will have a focused theme that will combine related pieces. Each of these themes will be accompanied by a project built by the IoT Cloud Advocacy team at Microsoft that you can build yourself or remix into something brand new! You don’t have to follow a theme to be a part of #JulyOT, but it may be of interest if you have an idea that falls into one of these topics. 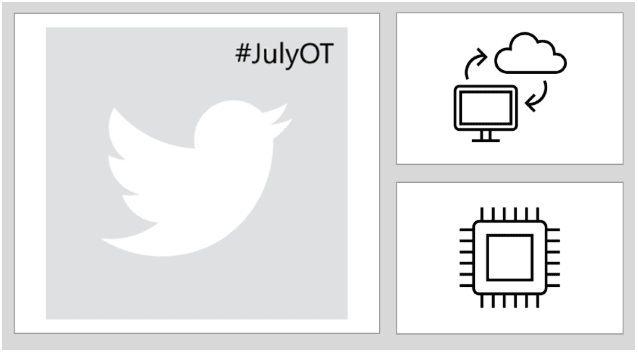 The first week will begin with primer content intended to introduce the concept of IoT to interested contributors. We will also “tease” out some of the projects that will be released later in the month. This is the time for contributors to begin thinking about what they wish to create and a great way to learn about real-world applications in the realm of IoT. It is highly suggested to author your Tweets during the Content Kickoff period and we’ll be in touch throughout the month to check in on your project’s progress!

July 6 – 10 : Artificial Intelligence at the Edge

The second week will focus on AI @ Edge solutions that make use of techniques like computer vision to produce intelligent solutions that run locally on embedded hardware. Paul DeCarlo has provided a themed project that consists of a 5-part series on developing an Intelligent Video Analytics service, accompanied by recorded livestreams to guide you through the development process. This content will show you how to build an end-to-end architecture for custom object detection using NVIDIA hardware with Microsoft Azure. The week will culminate with a livestream on July 10 that will feature developers from NVIDIA. Come ready to ask questions as we will be answering them live on the air! 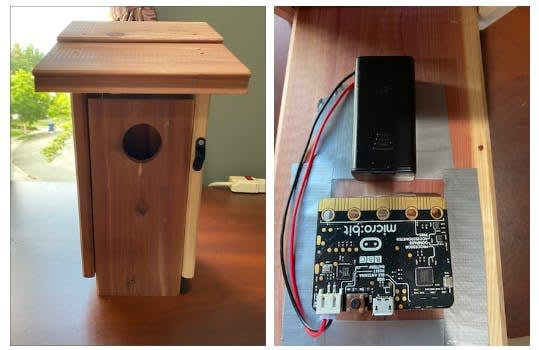 The third week is all about empowering makers and students to build IoT projects, particularly with a focus on teaching others. We want to extend the subject of IoT to students and possibly family members with projects that are fun and easy to get started with. Jim Bennett has created a relatively inexpensive project that teaches you how to make smart garden ornaments. This is a fun week long project for those who want to take their first steps into the world of the Internet of Things (IoT) using devices that are popular with kids and tools that make programming accessible to young developers. You'll use a Raspberry Pi along with some BBC micro:bits and Microsoft MakeCode, and any garden ornaments you have to hand to build a smart neighborhood, gathering data such as temperature and soil moisture levels and displaying it in the cloud using Azure IoT Central. 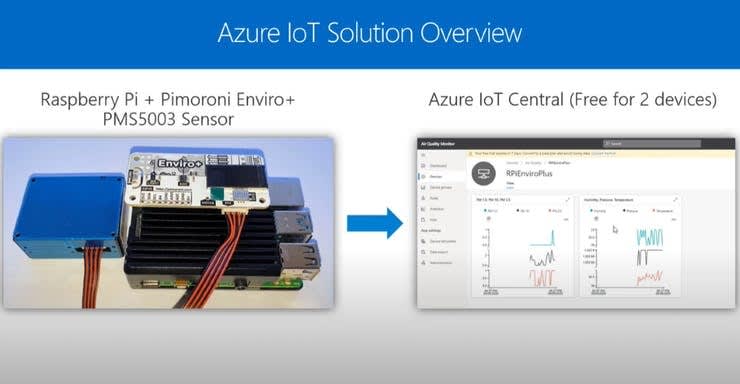 The fourth week will cover a variety of projects built around microcontrollers (for example Azure Sphere and embedded hardware like the Raspberry Pi. This also includes a focus on real-time operating systems that run on these devices. Dave Glover has produced content that covers how to build a Raspberry Pi air quality monitor, Azure Sphere RTOS integration, and a full learning path focused on Azure Sphere Development. Learn how to not only built intelligent devices and apply custom sensors but also discover how to connect your devices to cloud services for command + control and reporting!

The final week of #JulyOT will focus on free learning resources like Microsoft Learn and other materials to help prepare for the Azure 220 IoT Developer certification. Thomas Maurer has written an extensive study guide that we have augmented with live videos from partner training resources provided by Diana Phillips. We hope that many of you will take the learnings that you have made throughout #JulyOT and leverage the experience to achieve an official designation as a certified IoT Developer!

It is our hope that we can inspire many of you to pursue a personal project in the IoT space during #JulyOT. Throughout the month, we will focus deeper on themed content in addition to projects that are created by you! There is never a bad time to jump into the fun of creating your own project, but we hope that you can build with us during this special time of year! If you feel inspired, let us know with a Tweet and don’t forget the #JulyOT hashtag, we can’t wait to see what you will build!