This is the second part of this series:

In this article we will cover the following:

There is always a ton more to learn about functions such as how to work with different types of trigger, how to create APIS, how to document those APIs and so on. We have merely scratched the surface

Recap and next steps

Ok, so hopefully you’ve read the first part in this series so you know your way around creating a Function app and your first Azure function and how to run the same in your Portal IDE and in the browser. If not, have a look here

At this point, we’ve merely scratched the surface of what the portal IDE can do. So let’s try to refactor our code from our first post in this series and discover some of the Portal IDEs while we do so.

Getting to know your portal IDE

Once your function has been generated it’s time to get to know your portal IDE. It looks like this: 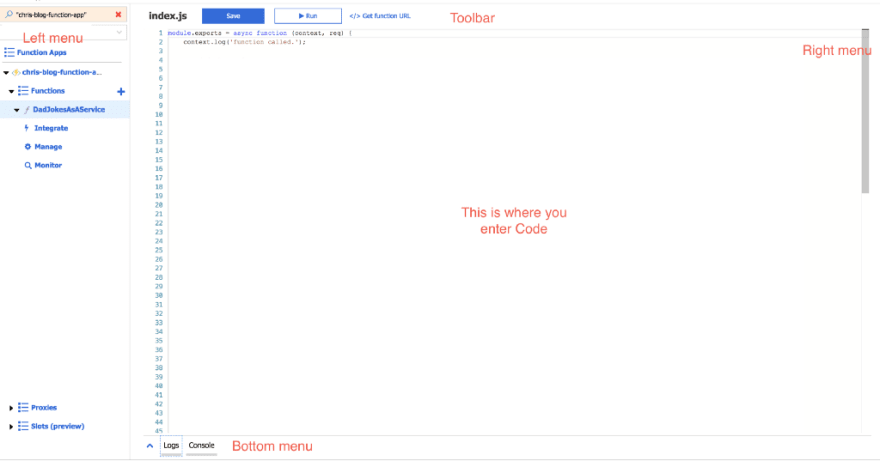 It consists of the following:

Left menu , this is placed on the left side right under your function

Toolbar, this is placed at the top and lets you do things like Save, Run and get a URL for your function

The right menu, this is a tabulated menu on your left that allows you to do two things:

Ok, so we understand better what parts our Portal IDE consists of, let’s now have a look at our code we created in the first part of this series. The first thing we have is this static list of questionable jokes:

What we normally do in Node.js project is to move those to a separate file that we call jokes.js. So, therefore, let’s use our right menu and create a file. We need to take the following steps:

Add a new file and move the list in there

We fill in our filename jokes.js and move over the content from index.js and we should now have:

Don’t forget to addmodule.exports = jokes at the end of jokes.js to ensure we can import our jokes list properly.

Import our jokes.js file as a Node module

At the top of our index.js file we can now write:

and that’s enough to make it work.

We also had a list of URLs for pictures of laughing Dogs that we found on the Internet. Let’s create a file dogUrls.js and place all the URLs in there. It should look something like this:

Just like with jokes.js we can now import dogUrls.js as a Node module as well. So the top of our index.js should now look like this:

At this point we will move away from our DadJokes service, it’s probably as good as it’s ever going to get, which isn’t saying much ;) It’s time to take on another favorite of the Internet, cat pictures !!.

I think I heard your squeal of despair all the way from here. Don’t worry this is just for educational purposes so we learn how to work with HTTP calls and downloading dependencies :).

and then when you are presented with Triggers choose HTTP trigger: 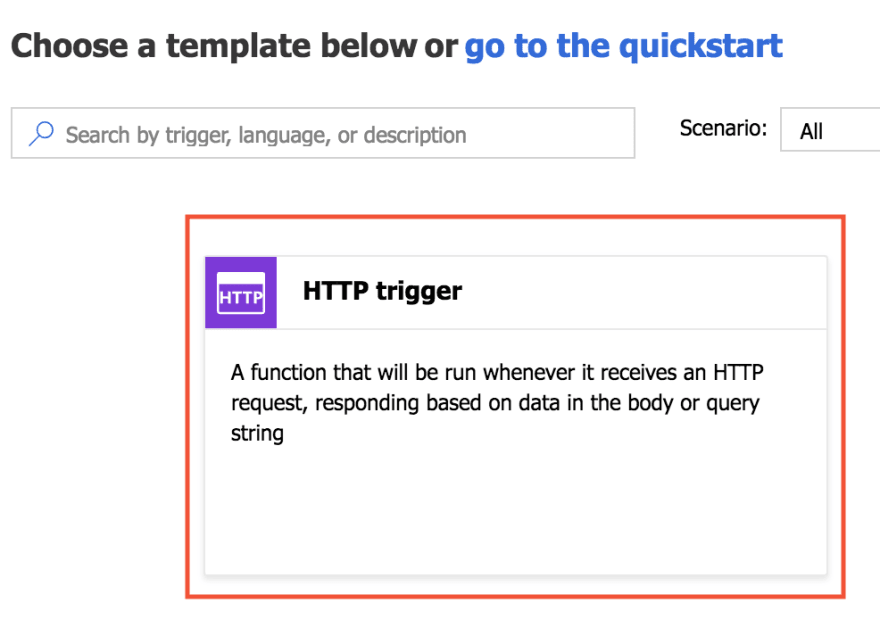 Thereafter set authorization level to Anonymous and give it the name CatsAsAService , like so: 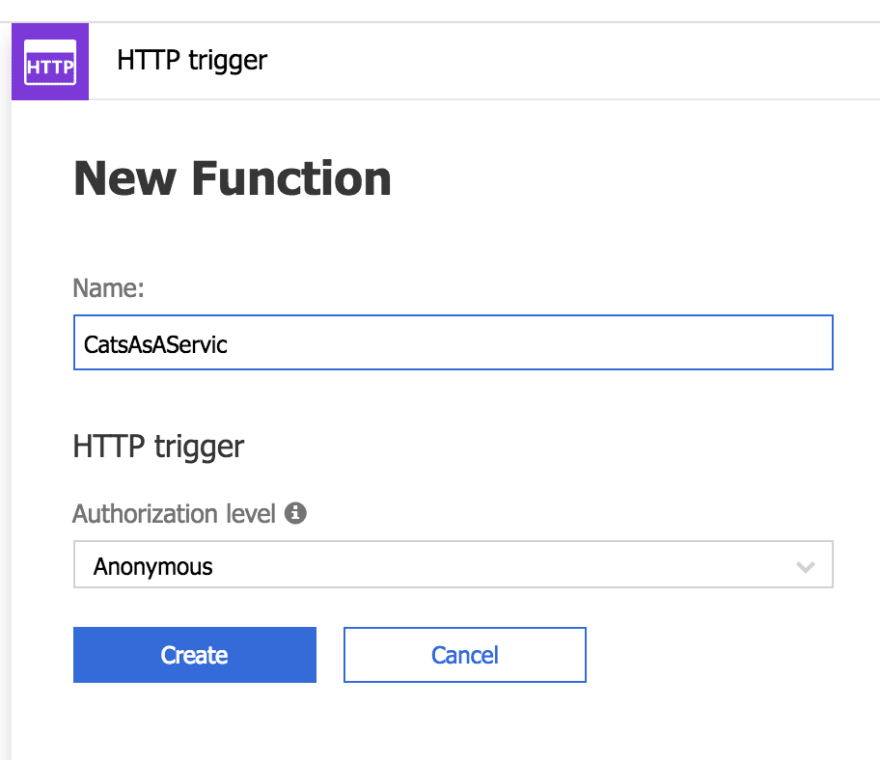 At this point, we have a new function but we need to add the capability to do HTTP calls. To make that happen we need to use a library that can do that for us. We could use the built-in http library but we opt to install the node-fetch library instead with is just like the fetch that you use in the browser. We need to do two things at this point:

To accomplish the above we need to head to the bottom menu and click Console, like so:

Ok, let’s first hit the command dir, to list our files, we are inside of Windows system :)

Ok, above we can see we have the files function.json and index.js. Lets now run our commands npm init -y followed by npm install node-fetch. Those commands create a package.json file and a package-lock.json as a result of us initializing our Node project but also downloading node-fetch.

We can also see that node-fetch have been installed by inspecting package.json:

Great, so node-fetch is there and we can thereby use it to make HTTP calls.

With Azure functions, we have an excellent way of logging namely by using our first argument in our Azure function called context. context has a log() method on it that when used can log to our Logs window in our bottom menu.

Let’s do the following:

Ok let’s first declare a function that will do the HTTP call, like so:

Above we declare the method getHttp() and then we use our fetch() method and give it a URL. In the then() callback we ensure that we transform the result into JSON, so far so good.

For our next step, we go into our Azure function and invoke getHttp(),. Because it’s using the async keyword we can use await to wait for the result to come back and then log it out, like so:

Running the function at this point gives us the following output in Logs :

As you can see above we get a nice response, however, it returns 87 records so I cut it after the first item in the list it returns. The URL we were using was for the open Star Wars API and it contains everything we could possibly want to know about the franchise. Let's stay on mission however and go back to Cats..

Not at all surprising, trying to Google a Cat API you get a HUGE amount of responses, cause we all know that Internet was designed to support Cat memes, right ;) I’ve decided on a specific API, cause it didn’t require me to sign up for an API key. I went with thecatapi and the following URL in particular:

You can definitely sign up and get an API key and get a richer experience, but we will only use the free version and we end up getting a response looking something like this:

We can definitely work with the above and try presenting that in an HTML image, as we did with our Dad Jokes, so let’s do that next:

The above digs out the URL from the response and we populate a response object, give it the response type HTML and we let the body consist of an IMG tag with its src set to our JSON URL. The result looks like: 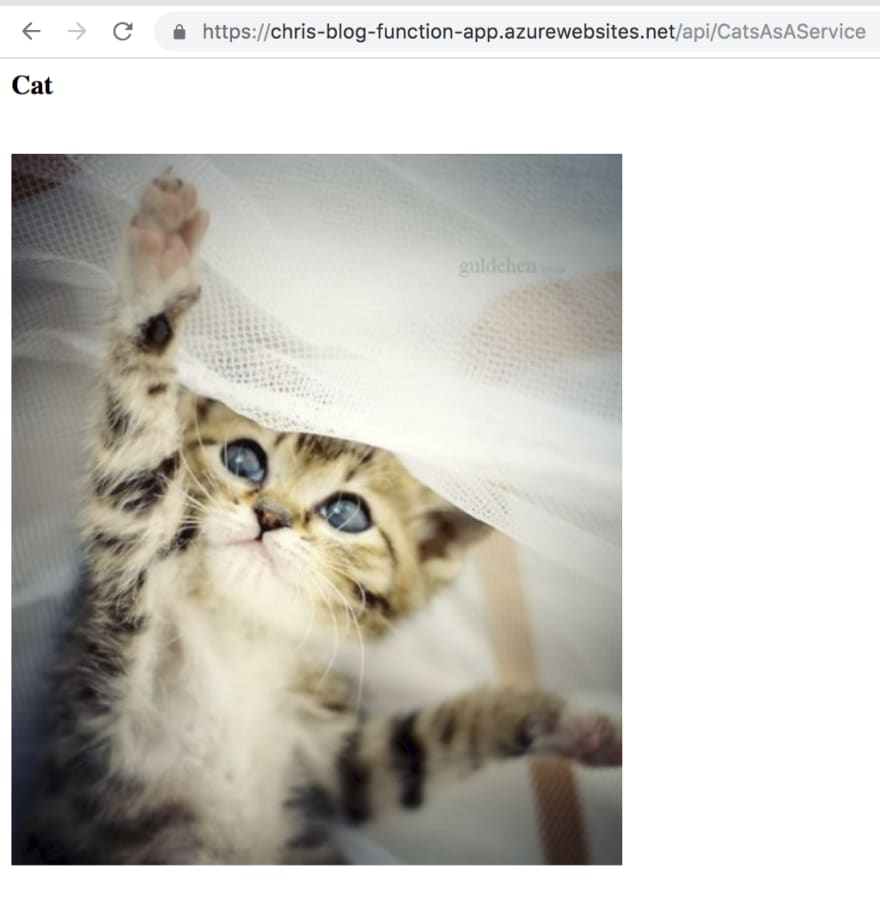 That was the end of this part. In our next part, we will show you how to work with functions in VS Code, cause let’s face it, even though the Portal seems to have some nice functions it’s not really the IDE of our dreams. See you in VS Code.

We aimed to describe the IDE in the portal a bit better and we managed to describe and explain what parts it consisted of and what their purpose was. Moving on we took our old DadJokesAsAService function and refactored it and we thereby introduced how you could be using Node modules. Thereafter we created a new Azure function and learned how we could install a library like node-fetch. We then used node-fetch to call a Cat API responding with JSON and we ended up responding with yet another page with cats on it. Thereby we contributed to Internets original purpose ;)

This was the last part of our Portal series but in our next part, we will look at how we can author Azure functions from VS Code so I hope you are excited about that.