Tomcat vs Undertow vs Webflux

JHipster is used by thousands of people to generate production-ready Spring Boot applications. We've been using Undertow for years, with great success, but as we are planning for JHipster 7 we started discussing migrating away from Undertow.

This is the kind of discussion which happens very frequently in the JHipster community: with so many people contributing, we often test and try alternatives to our current approach.

We ended up discussing about 3 different application servers:

I created a performance benchmarks GitHub repository, with applications generated by JHipster.

Those applications are more complex and realistic than simple "hello, world" applications created with Spring Boot. For instance, they use Spring Security and Spring Boot Actuator: those libraries will impact application start-up time and performance, but they are what you would use in the real world.

Then, they are not as complex as they could be: I didn't configure a database or an application cache. Those would make running performance tests a lot more complicated, and wouldn't add any specific value: as we would use the same drivers or caching solution with all three application servers, we would end up testing the same things.

In the GitHub repository, you will find 4 directories: one for each application, and one with the performance tests.

As we needed to set up a test environment, using the cloud was obviously the best solution! For this test, I have created 2 virtual machines, with their own private network.

One of the machines was hosting the application server, and the other one was used to run the performance test suite.

The VMs were created using the Ubuntu image provided by default by Azure, on which I installed the latest LTS AdoptOpenJDK JVM (openjdk version "11.0.6" 2020-01-14).

To configure your virtual machines easily, I maintain this script which you might find useful: https://github.com/jdubois/jdubois-configuration.

Here are the results after 10 rounds, for each application server:

As expected, Undertow is lighter than the competition, but the difference is quite small.

For our runtime performance, we needed to have a specific test suite.

The performance test were written in Scala for the Gatling load-testing tool. They are pretty simple (we are just doing POST and GET requests), and are available here.

This test does the following:

The objective here is to stay under 5,000 requests per second, as when you go above that level you will usually need to do some specific OS tuning.

The Undertow results were quite good: it could handle the whole load without losing one single request, and it was delivering about 2,700 requests per second: 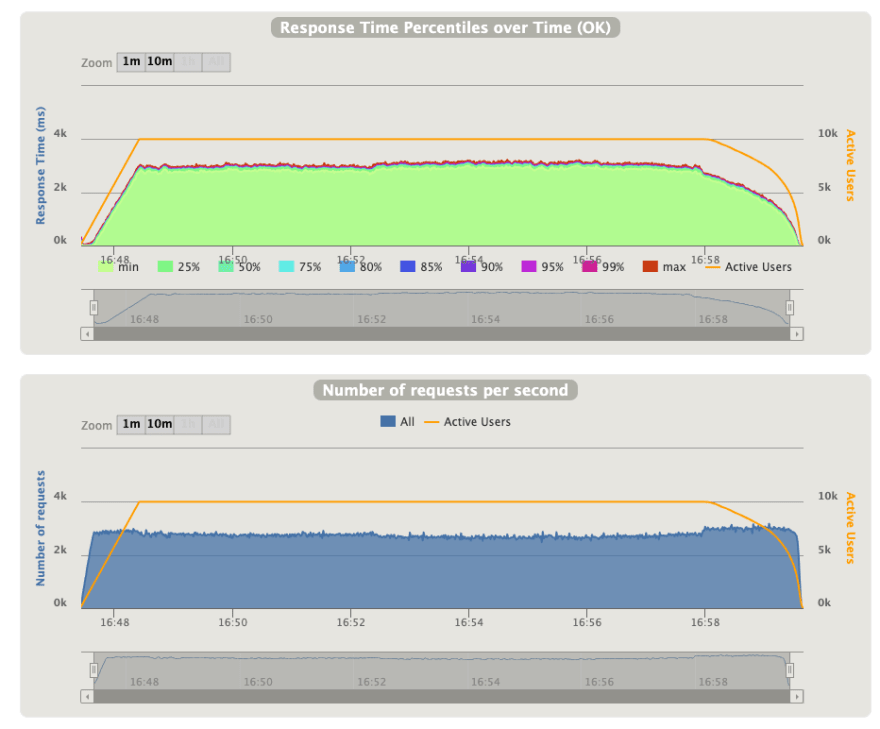 The response time was quite slow, with nearly all users having to wait about 3 seconds to get a response. But it was also quite stable (or "fair" for all users), as the 50th percentile is not that far away from the 99th percentile (or even the "max" time!): 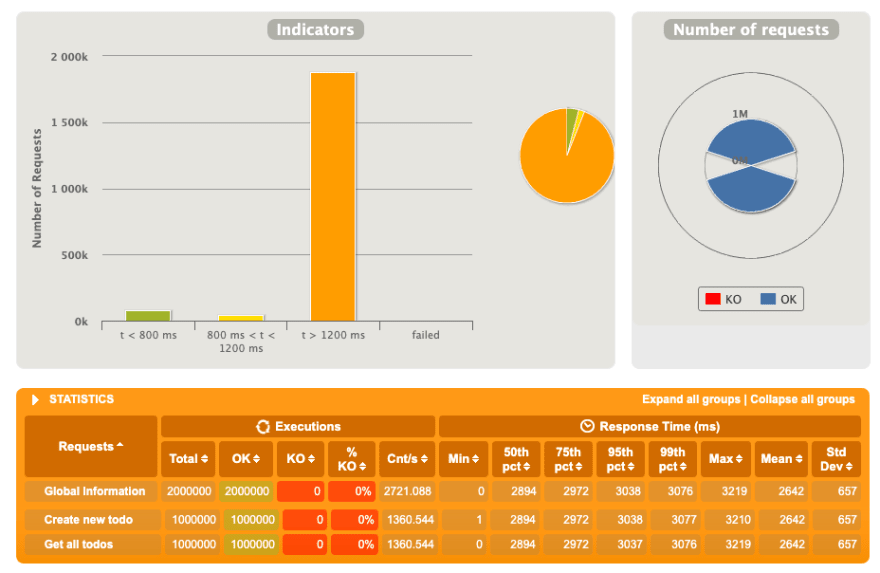 Tomcat had about 5% of its requests failing: 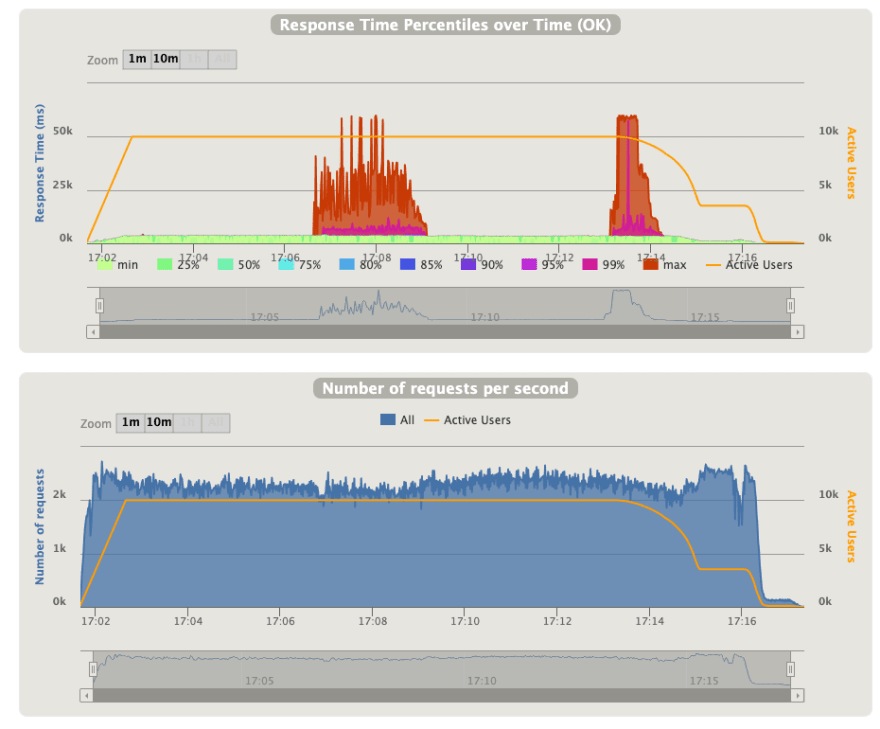 Last but not least, the response time was good for about 10% of the requests, but it was much worse than Undertow at the 95th and 99th percentile, which shows that it could not handle all requests correctly. That's also why it had such a bad standard deviation (2,760 seconds!): 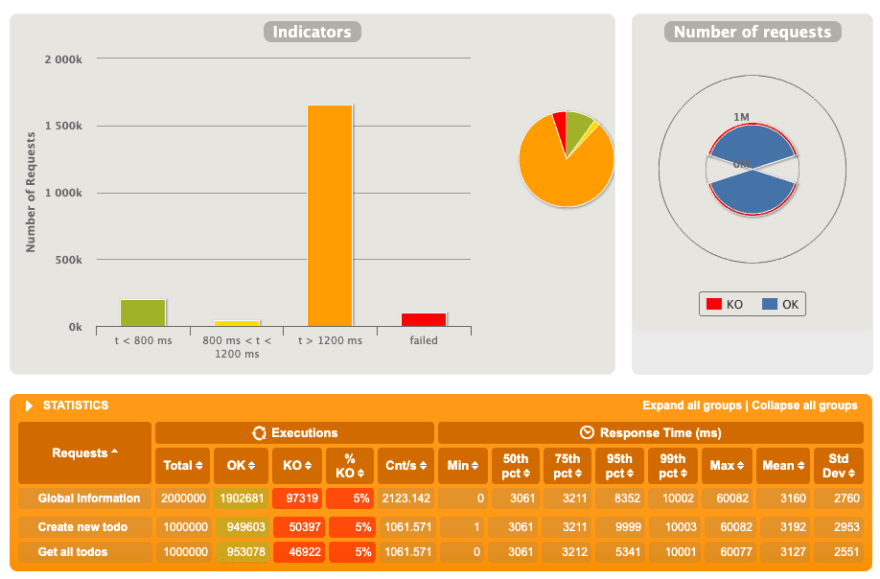 Webflux had about 1% of its requests failing:

Those failures were at the beginning of the tests, and then the server could correctly handle the load: it looks like it had to trouble to handle the traffic growth because it was quite sudden, and then stabilized. 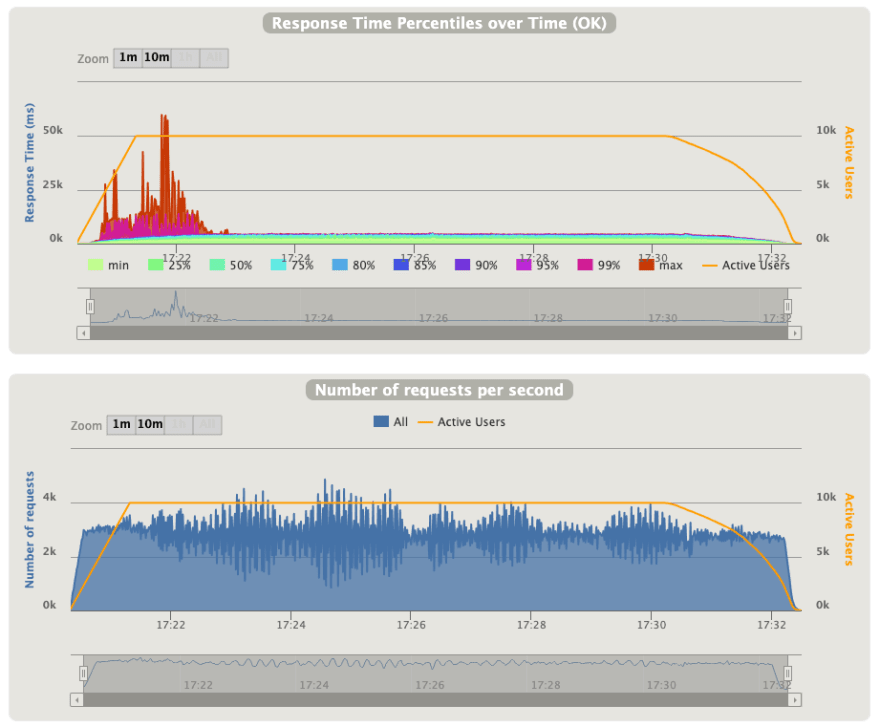 The variations that we noticed in the previous graph also explain why, compared to Undertow, Webflux has a lower 50th percentile, but a higher 95th percentile. And that's also why its standard deviation is much worse: 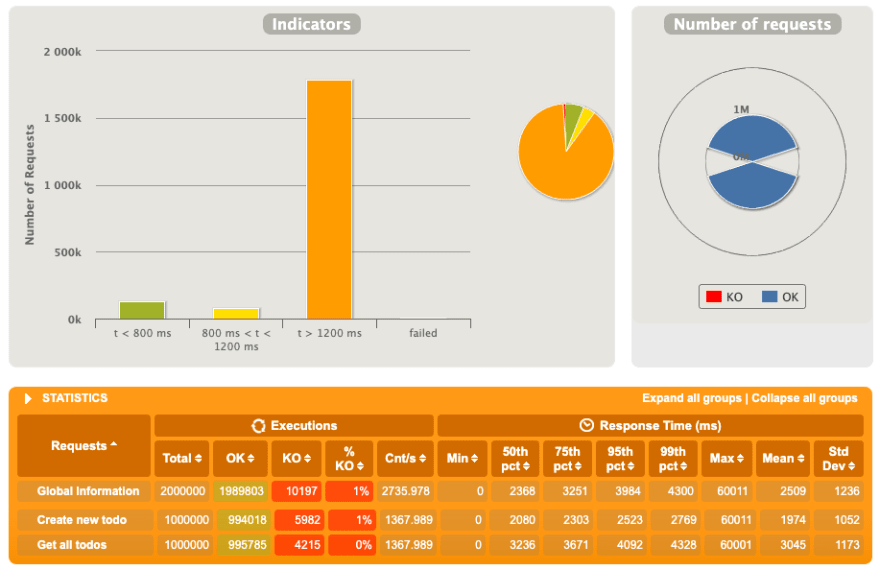 Undertow definitely had impressive results in those tests! Compared to Tomcat, it proved to start up faster, handle more load, and also had a far more stable throughput. Compared to Webflux, which has a completely different programming model, the difference was less important: Webflux started faster, but had 1% of errors at the beginning of the test - it looks like it had some trouble to handle the load at the beginning, but that wasn't a huge issue.

On JHipster, this is probably one of the many different choices that we have made, which make JHipster applications much faster and more stable than classical Spring Boot applications. So this performance test is definitely very important in our future decision to keep Undertow or move away from it. If you'd like to participate in the discussion, because you ran more tests or have any good insight, please don't hesitate to comment on our "migrating away from Undertow" ticket, or on this blog post.

What do you look for in a Code Editor?