The Big-O notation measures the worst-case complexity of an algorithm. In Big-O
notation, n represents the number of inputs. The question asked with Big-O is the
following: “What will happen as n approaches infinity?”

The figure below shows some common Big-O notations: 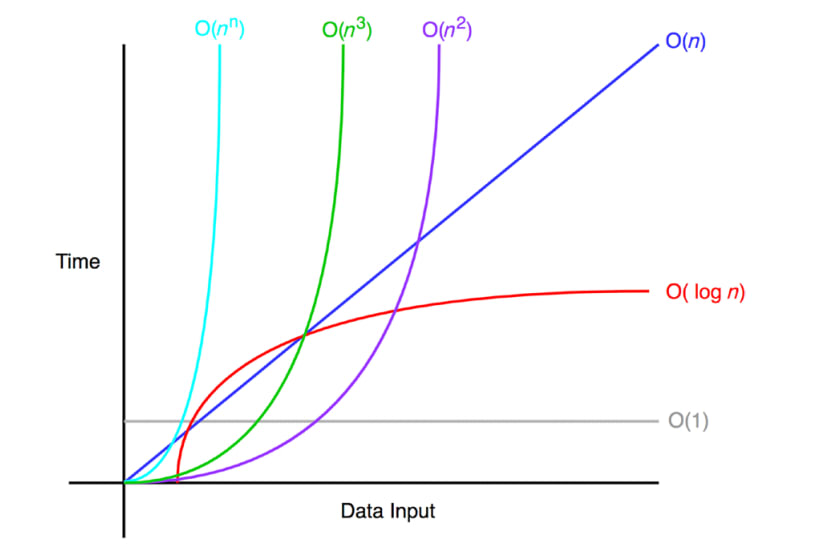 O(1) does not change with respect to input space. Hence, O(1) is referred to as being constant time.
An exmple of an of an O(1):

O(n) is linear time and applies to algorithms that must do n operations in the worst-case scenario.
most its just A simple basic loop that within it we perform constant time operations.
An exmple of an of an O(n):

A Logarithmic time function is one in which the time of execution is proportional to the logarithm of the input size.
Consider the following example:

From the preceding code, we can see that the number of iterations would always be less than the log on the input size. Hence, the worst-case time complexity of such an algorithm would be O(log(n)).
The efficiency of logarithmic time complexities is apparent with large inputs such as a million items.

With quadratic time algorithms, we have now entered the dark side of the time complexity.
As the name suggests, the size of the input quadratically affects the running time of the algorithm. One common example is nested loops:

As you can see from the preceding example, for i = 0, the inner loop runs n times, and the same for i = 1, and i = 2, and so on. The inner loop always runs n times and is not dependent on the value of n, thus making the algorithms time complexity O(n2).

Let’s represent an algorithm’s complexity as f(n). n represents the number of inputs, f(n)time represents the time needed, and f(n)space represents the space (additional memory) needed for the algorithm. The goal of algorithm analysis is to understand the algorithm’s efficiency by calculating f(n).
However, it can be challenging to calculate f(n). Big-O notation provides some fundamental rules that help developers compute for f(n).

Coefficient Rule: “Get Rid of Constants”

Let’s first review the coefficient rule. This rule is the easiest rule to understand. It simply requires you to ignore any non-input-size-related constants. Coefficients in Big-O are negligible with large input sizes. Therefore, this is the most important rule of Big-O notations.

This means that both 5f(n) and f(n) have the same Big-O notation of O(f(n)).
Here is an example of a code block with time complexity of O(n):

This block of code has f(n) = n. This is because it adds to count n times. Therefore, this function is O(n) in time complexity:

This block has f(n) = 5n. This is because it runs from 0 to 5n.
However, the first two examples both have a Big-O notation of O(n). Simply put, this is because if n is close to infinity or another large number, those four additional operations are meaningless.
It is going to perform it n times. Any constants are negligible in Big-O notation.

It is important to remember to apply the coefficient rule after applying this rule.
The following code block demonstrates a function with two main loops whose time complexities must be considered independently and then summed:

The product rule simply states how Big-Os can be multiplied.

In this example, f(n) = 5n*n because line 7 runs 5n times for a total of n iterations.
Therefore, this results in a total of 5n2 operations. Applying the coefficient rule, the result is that O(n)=n2

Polynomial Rule: “Big-O to the Power of k”

The polynomial rule states that polynomial time complexities have a Big-O notation of the same polynomial degree.
Mathematically, it’s as follows:

If f(n) is a polynomial of degree k, then f(n) is O(nk).
The following code block has only one for loop with quadratic time complexity:

In a majority of the real-world scenarios, we will encounter a lot of P and NP problems, a classic example of NP-class problem is Traveling Salesman, where a salesman wants to visit n number of cities to start and end his trip from his house. With a limited amount of gasoline and an upper limit on the total miles that can be driven, can the salesman visit all the cities without running out of gas?

Until now, we have seen some examples that are pretty straightforward: they all have a single loop or nested loops. However, a lot of times, there will be scenarios in which we will have to handle multiple loops/function calls/branches originating from the same algorithm.
Let us see an example of how we can calculate the complexity in that case?

The collective complexity of this code would be the summation of the complexity of both the sections. So, in this case, the overall complexity would be O(n + log n), which asymptotically will be O(n).

Although our method only performs some O(1) operations, it constantly changes the input and calls itself until the size of the input array is zero. So, our method ends up executing n times, making the overall time complexity of O(n).

Once suspended, b0nbon1 will not be able to comment or publish posts until their suspension is removed.

Once unsuspended, b0nbon1 will be able to comment and publish posts again.

Once unpublished, all posts by b0nbon1 will become hidden and only accessible to themselves.

If b0nbon1 is not suspended, they can still re-publish their posts from their dashboard.

Once unpublished, this post will become invisible to the public and only accessible to Bonvic Bundi.

Thanks for keeping DEV Community 👩‍💻👨‍💻 safe. Here is what you can do to flag b0nbon1:

Unflagging b0nbon1 will restore default visibility to their posts.