This post was originally written on my personal website, where the charts and plots are interactive and I show the code to plot. If you are missing that, check out the original.

In part 1 of this series we looked at the first part of this project. This included:

We will continue from where we left of, diving deeper into the genres.

We'll load up the original JSON from Spotify, as well as the genres we created in part 1. We then combine them into comb, the combined dataframe. In genres.csv, we again see the 20 columns with the genres for each song, where the genres are collected from the artist, since songs are not labeled as having a genre. For more details, please have a look at part 1.

Genres retrieved from Spotify and the combined dataframe. We rename the genres columns from just a number 0-20 to 'genre_x' with x between 0 and 20, so they're easier to recognize.

comb consists of df + genres_df, with the genre columns at the end.

In part 1, we have seen how many genres each song has and how their numbers are distributed. The next question then, naturally, is: What genres are they? So let's see!

For the following analyses, remember that if I play 10 songs by Kanye, Kanye's genres will be present 10 times.

To analyze the genres, I first create a dataframe that contains all of the genres and their counts. This will be handy in the near future.

Then we can plot. Lets start with the total listens per genre. 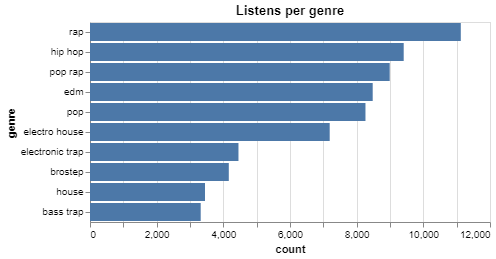 No big surprises here. My main music tastes are hip hop and electronic music, with main genres techno and drum and bass. However, for the latter two I mainly use Youtube, which hosts sets that Spotify does not have. So my Spotify is mainly dominated by hip hop and its related genres, like rap, hip hop and pop rap (whatever that is? Drake maybe?). I expect many hip hop songs are also tagged as pop, which would explain the high pop presence, while I normally am not such a pop fan. Lets dive a bit deeper into this!

As a next step, let's verify which genres coincide with which other genres. This will test our hypothesis that pop is used as a tag for hip hop, but will also in general provide us with a better feeling of what genres are related to which other genres.

For this,we loop over the rows and for each present genre, we put a 1 in that column, while also casting to np.int8. This means that, instead of the normally 32 bits, we use 8 bits and thus safe some memory. Since we only wanna represent a binary state (present or not present), we could also use boolean. However, since we're doing arithmetic with it later, int8 will do. We fill the empty cells with 0. We only do this for the top 20 genres. This results in a dataframe with a column for each of the top 20 genres.

Now that we have this data, we can do a correlation analysis of when each genre coincides with what other genre. Now, because genre is a nominal data type, we cannot use the standard correlation, which is the Pearson correlation coefficient. Instead, we should use a metric that works with nominal values. I choose Kendall's tau for this, due to its simplicity. Normally, Kendall's tau is meant for ordinal values (variables that have an ordering). However, because we are working with a binary situation (genre is either present or not) represented by 0 and 1, I think this should still work. One other thing to note is that Kendall's tau is symmetric, and this means tau(a, b) is the same as tau(b, a).

Lets loop over all the combinations of the top 20 genres and compute their tau coefficient.

If we plot this nicely, we get the following overview of "correlations". 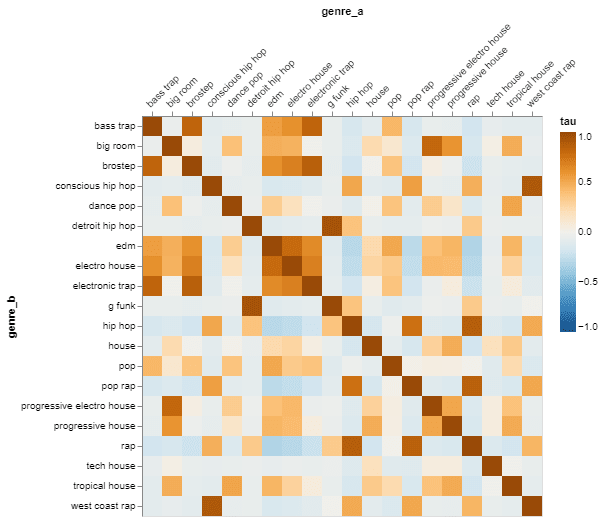 We immediately can see some interesting clusters. We can see a strong tau between most of the electronic music genres, like edm, electro house, bass trap, big room, brostep and electronic trap. Then, looking at hip hop, we can see very strong coefficients with rap and pop rap, neither of which are big suprises. My initial hypothesis that pop would be correlated with hip hop has been debunked, though. Pop seems to be more strongly related with edm and some other electronic genres, and have a negative tau with hip hop related genres, like hip hop (-0.29), pop rap (-0.28) and rap (-0.32).

In this overview, I think there are two interesting insights still:

This is a very interesting analysis in my opinion, but also one of the more challenging one. I've approached the problem the following way, given the data I had.

Step 1: count the frequency per interval. We don't do this just for the top n genres, but for all genres. This, naturally, results in a lot of columns and a very wide dataframe.

Put the counts_per_month in a dataframe and calculate the total songs played per month.

Step 2: We then normalize all genre counts by the number of songs played in that time period.

To get a cleaner visual, we remove any data before August 2016.

We now have a dataframe with 863 columns, which corresponds to 861 different genres. This dataframe has all the genres and what percentage of total plays they were present as a genre. Keep in mind that an artist/song generally has more than one genre, so the sum of these fractions is not 1. This dataframe looks like this:

Our data now looks as follows:

Step 3: Sort given these values and extract the top 5. Unfortunately, the data is not in a shape that we can do that (to my knowledge at least), so we need to transform it a bit further by moving from a wide to a long data format and filtering out some values.

The melting of the dataframe results in a single row per percentage per genre per timeunit. This makes it easier to plot with Altair. Furthermore, we create a datetime column from our year + month columns, which is also better for Altair to use.

Drop columns where either the genre or percentage is Nan. This reduces the number of rows even more, so that taking the n-largest later will be faster.

This looks great! But, there is one problem, and that is that we likely have way too many rows for Altair. We have almost 7k rows, while Altair's maximum is 5k. Not too bad, but we still need to remove a bunch of rows. But that is fine, since we're only interested in the top 5 of each month anyway. Using pandas' .groupby and .nlargest, we can extract this fairly easy. We extract those the indices of the remaining rows and index into the melted dataframe to only have the rows in the top 5 for each month left.

In the chart below, there is a lot going on. On the x-axis we have time while on the y-axis we have the normalized percentages of the top 5 genres. This means that for each month, the top 5 genres' percentages sum to represent 1. This might be hard to grasp, so I've put the non-normalized one next to this plot to make the difference clear. Some colors are used twice, but there is no color scheme available in Altair that supports more than 20 colors, so this will have to do for now 😉. You can hover over the bars to get details of those bars and click on legenda items to highlight a genre.

The following plot is very nice when it's interactive, so please check out that one on my own website 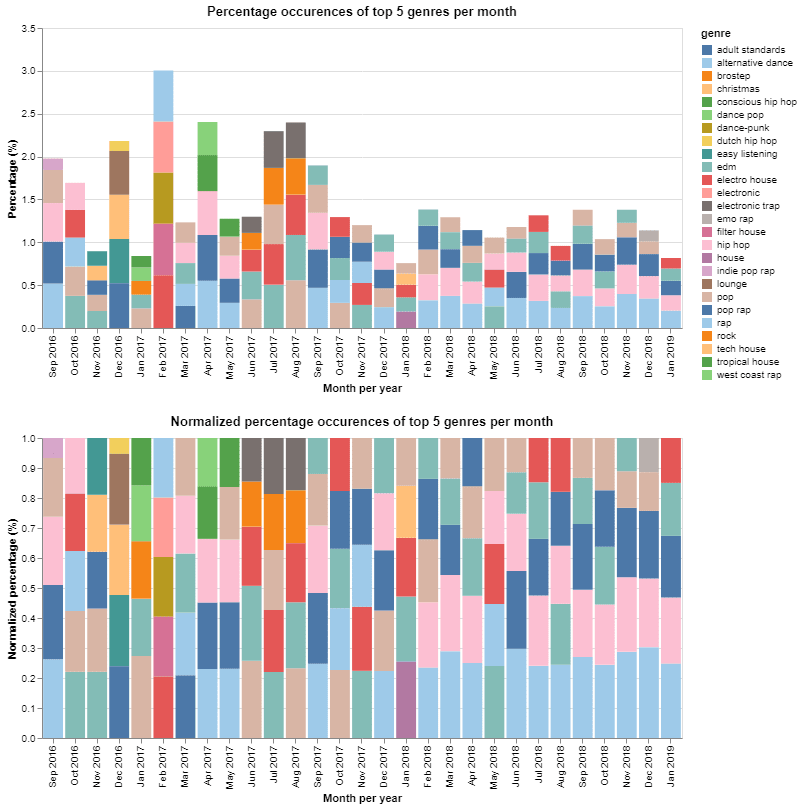 There are definitely some interesting things in theses plots. We can see some consistent attendees that we also saw in the most listened genres in general, so that's not a big surprise. For example, these include rap, edm and hip hop.

So we've seen how the genres relate to each other in terms of percentages per month. We can also see what the top genres are per month, but it can definitely still be improved. I really just want a list with the top 5 genres per month, ideally easily readable and pretty close to the example we had from Last.fm.

We can get a list of the top genres per month by grouping and then applying list on the Series.

We then create a numpy array from these values and apply them column by column to new dataframe columns.

Until we finally arrive at the following dataframe. Now, still is pretty much what I wanted, so I'm happy with the result.

Now, in my original post I colored this table to be easier interpretable, but Dev.to does not allow that :(. So please see the original post for the full version.

Better get the 🚒 cause this table is 🔥.

This is really close to the Last.fm plot, apart from the lines between points that require 10 years of D3.js experience. We see some similar pattern to those in the earlier plot, but also can see some new insights. Here, we can focus some more on the anomalies that are present, like indie pop rap, dutch hip hop, filter house and conscious hip hop. These stand out more using this representation than before, which focused more on trends.

In part 2 we took a closer look at what genres I listen to and how that has developed over time. There were some very interesting insights, like the effects of holidays, and the change of music preference towards rap. We also recreated the plot from Last.fm, as close as possible at least. I'm quite happy with the outcome, but definitely have some newfound respect for Spotify analysts that have to do this for way more people. Although generalization also brings some advantages of course. Doing these analyses also is improving my skills with Pandas, because I have not previously worked that much with time data, so this is a great exercise. Also, having to look into the details of .groupby, and how it operates on timeseries aggregates and what operations are possible were great. For instance, I learned you can do a groupby on a datetime index or column like so:

and even multi-index this for month/year using:

Which is very cool and way cleaner than what I used! But I'm getting sidetracked.

Rounding off; thank you for reading and sticking with me! I'm very curious what results Part 3 will bring.

If you liked this blogpost, don't hesitate to reach out to me on linkedin or twitter. 😊

13 tricks for the new Bigquery Storage Write API in Python

Once suspended, baukebrenninkmeijer will not be able to comment or publish posts until their suspension is removed.

Once unsuspended, baukebrenninkmeijer will be able to comment and publish posts again.

Once unpublished, all posts by baukebrenninkmeijer will become hidden and only accessible to themselves.

If baukebrenninkmeijer is not suspended, they can still re-publish their posts from their dashboard.

Once unpublished, this post will become invisible to the public and only accessible to Bauke Brenninkmeijer.

Thanks for keeping DEV Community 👩‍💻👨‍💻 safe. Here is what you can do to flag baukebrenninkmeijer:

Unflagging baukebrenninkmeijer will restore default visibility to their posts.