A stack is a container of objects that are inserted and removed according to the last-in-first-out principle.

This is the official definition of a stack, but let's look at a more practical in-depth definition.

As the name suggests, you stack objects on top of each other.

A stack, much like any other data structure, can have some operations applied to it.

These 3 operations are the main operations for a stack. There are other operations as well, such as searching for an object, checking if the stack is empty, etc...

Having said that, do you notice anything similar between those 3 operations?

Exactly. There's only one entry and exit point in a stack and that's the TOP. 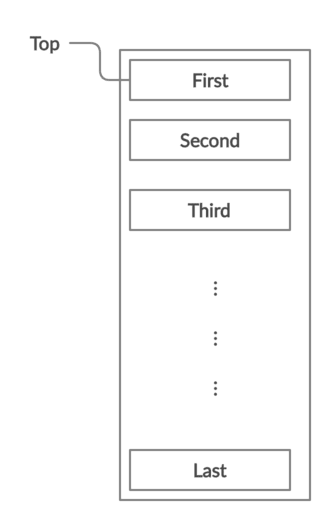 Even though a stack can be implemented using arrays, I'm going to use linked lists with ES6 Classes for that.

Node represents an object in the stack and it has 2 properties:

This is one way you can implement a stack using linked lists. Now, let's take every function and explain the logic behind it.

As mentioned earlier, we are only interested in the top of the stack, so we assign it as a property.

Peek: Nothing much to explain here, it returns the top and if it doesn't exist, it returns null.

Push: This function takes a value as an argument and creates a new node object having that value.
If there is a top object, assign the new node's next property to the top object.
Change the top to reference the new node.

Pop: This function checks if the top object exists first. If it does, assign the next node as the top. The way JavaScript works, if it sees an object that isn't referenced anymore, it gets removed (garbage collection).

isEmpty: I have added this function, as it helps in traversing the stack. You can also implement it using the already defined peek function.

Here are some use cases of the stack:

P.S. For real tho, recursion is an algorithm that needs a separate post to explain in detail, should it be my next post?

What does stack overflow actually mean?

A stack has a specific memory allocated to it, so when the stack is filled and you try adding another object to it, it results in an overflow.

How can you enact a stack overflow you ask?

It's nothing too complicated really.
Take this function for example

When this function is called, the stack will look something like this 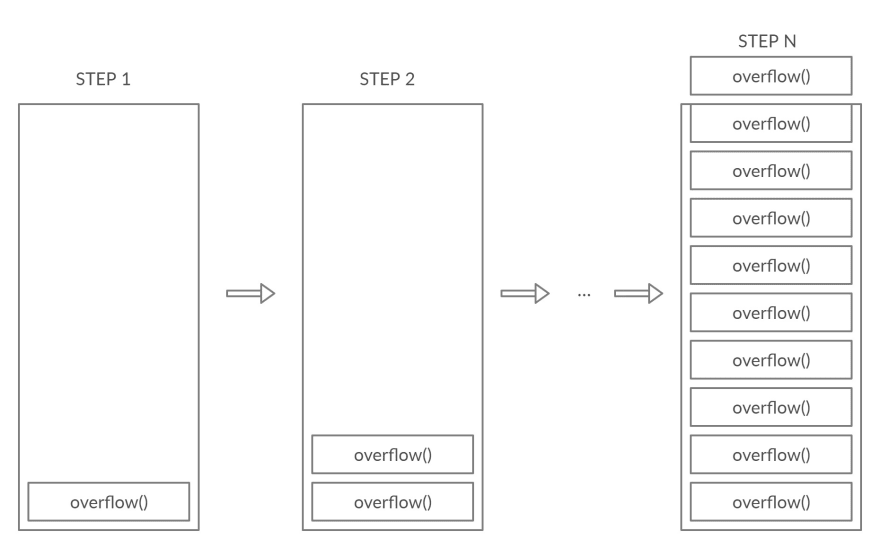 Make sure your recursive functions don't run infinitely, it's... bad.

For anyone reading this, all I can say is, I'm sorry. 🙇‍♂️

On a serious note, this is my first post. Ever.

I wanted to talk about queues as well, but I felt that the post was getting a bit long. Part 2?

I hope this has helped you understand stacks a little bit more. 😊

Once suspended, bazman will not be able to comment or publish posts until their suspension is removed.

Once unsuspended, bazman will be able to comment and publish posts again.

Once unpublished, all posts by bazman will become hidden and only accessible to themselves.

If bazman is not suspended, they can still re-publish their posts from their dashboard.

Once unpublished, this post will become invisible to the public and only accessible to Ali Bazzi.

Thanks for keeping DEV Community 👩‍💻👨‍💻 safe. Here is what you can do to flag bazman:

Unflagging bazman will restore default visibility to their posts.