You know those digital menu boards that you see at quick service restaurants? Well, last year I got to work on one of those.

Ok, but what does that have to do with the Broadcast Channel API?

A little bit of background

In our particular case, the menu board is a React web app running in a Chromebox at the restaurant. It supports two displays and we control which page of the menu it shows based on the URL route.

One of the requirements was that we needed to animate certain elements in the menu, but there was a catch. The animations had to be synchronized across the displays. We couldn't just fire up the animation loop whenever we wanted. We needed a way for the two pages to communicate with each other to start their timers at the same time.

What is the Broadcast Channel API?

It is a Web API that allows basic communication between browsing contexts (i.e. windows, tabs, iframes, webviews) on the same origin. 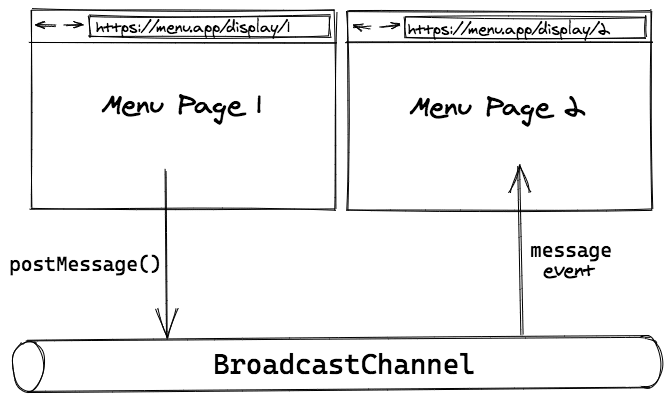 You start by creating a BroadcastChannel object and giving it a name. If a channel with the same name already exists, it will join the channel instead.

To send a message you call the postMessage() method on the created object, which takes any object as an argument.

This will dispatch a message event to each of the contexts that have joined the channel. We can then run a function for this event with the onmessage event handler.

To disconnect from the channel you call the close() method on the object.

Back to our app

We were able to leverage this API to communicate back and forth between the two displays and make sure they start their animation loop exactly at the same time. Keep in mind that each display "boots up" independently at slightly different times, so we need some negotiation up front to know when both of them are ready.

I made a simplified demo of this in Codesandbox. And here's a short preview of it:

Not every browser supports this natively. Fortunately, there's a npm package called broadcast-channel that has the same API and uses the native implementation in browsers that support it. Plus, it allows you to use it in Node too!

In this new video, I am going to provide you with a bunch of new information on how to use Azure Kube...

Starving with a Full Stomach