Sharing my 2018 moments with the world.

A good friend, a well-wisher, stopped by and told me that it was time that we wrap up 2018 and start planning for 2019. He asked me what were the special moments of my year and I stumbled trying to just find one moment that I can share. I started doubting myself for doing nothing. As I started writing I found colors, experiences, and passion oozing out. Here it is for the world to see.

Firsts of a Lifetime

Though I have attended conferences before and had given talks in them. It was not PyCon. PyCon is the goto conference for every Python developer. This year I was looking out for an early-bird ticket like an eagle. Finally, I flew to Hyderabad with my four friends and checked PyCon off my list. Going to PyCon as a speaker is on my next year’s bucket list.

Those who are close to me know how much I love to travel and why I don’t do it. This year I gladly took the opportunity that came to my doorstep. We went on a 2-day team outing to Yelagiri where I got my first trekking experience.

More than the trek, I loved the reflections that occurred to me during the hike. To get an overall picture of the experience, you need to read this.

This is something I never thought I would do in life; something I never thought I had it in me — writing a blog series. After the first 100DaysOfML, I knew I had to focus on one domain and crack it, and I chose NLP for chatbots. As I started to work around it, I got to know the reality. I knew I had to get the basics right. Instead of depressing myself with all the math that’s hidden beneath machine learning, I resorted to taking the top-down approach. I started demystifying Rasa platform, understood how an NLP engine works and wrote a blog series about it.

Salma Moosa — founder of Startups Club — someone I look up to whenever I feel down. She has always been my inspiration from the day I met her. When she released her book “A thought to a million dollars”, I bought it immediately. The first thing I liked about the book was that it was small, short, crisp, and to the point. I finished the book in a couple of days and wanted to thank her for the same. The impact I had from the book was beyond a tweet or a message, and so I wrote a book review expressing my undying love for the book.

Hacktoberfest is this month-long fest that promotes open-source, it is conducted by GitHub andDigitalOcean. The hacktoberfest stamp is a trademark in every developer’s life. I took a mission to revamp my 2-year-old open source project and guess what? It only took 5 Pull Requests to do it.

I was eyeing open source projects for a long time now. With hacktoberfest and the blog series, I gained the confidence to contribute one. The time came when I had to do some customizations on pandas code. I ended up submitting it in a pull request. It is still in process of getting merged. You will hear the whole story soon.

Around April 2018, I got to know I had to step into the next stage of my professional life. I started interviewing for companies and after a round of interviews, and considering consulting options, I chose Orangescape. You will see the ripple effects of this decision in the rest of the blog.

I always loved physical books and was skeptical about the Kindle. Earlier this year, I had to find a trade-off between the comfort of reading vs. the aura a physical book gives. I chose comfort. It has been good so far.

Those who know me personally know the crazy attachment I had with my mobile. I was so madly attached to an extent that I even wrote afinal goodbye for it. I had a 3-year-old OnePlus One. There were glitches from the starting of the year. It started dying in Feb. Somehow I made it work, and manage to drag its life until November. I was reluctant to let it go. But I had to do it and albeit a bit reluctantly, I did it. Now I have the newOnePlus 6T. I am already in love with it.

We started Build2Learn this year and successfully completed 15 sessions. The grand hackathon is up for Dec 1st

I always wanted to start a women-centric tech community in Chennai. I tried to bringWomen Who Code, Django Girls, or Girls Who Code to Chennai but somehow it didn’t click. After IWD I got close toSwaathi, she helped me restart the womentechmakers — a community that she was running earlier.

How this started was an interesting story. We were setting up our website for build2learn, and I found out there were no pictures that showcased women in them. That sent out a very unwelcoming sign. We had a heated argument and changed the image with the most women in them. As a result,Ashish Cherian challenged me to do something and motivate girls in their college to pursue tech. Hence, we organized a girl’s coding club orientation. I am not sure how many people I motivated that day, but I will never forget that warm feeling of satisfaction I felt on that day.

This was the most challenging talk I delivered this year. My audience were girls of age ranging from 9–15. Colleges girls were better because I just had to ask them to do things which I learned the hard way. Doing the same here would be an overkill. I had to dilute my tech talk so much that it ended up as a completely different thing.

Most college girls already felt threatened by programming and wondered how guys eased through it. But in the case of these kids, they are just starting. We don’t have to save them from any threat instead I just had to give them the push they need to climb the ladder. So that’s exactly what I did. I told them that they were just “3 Steps away from programming”. 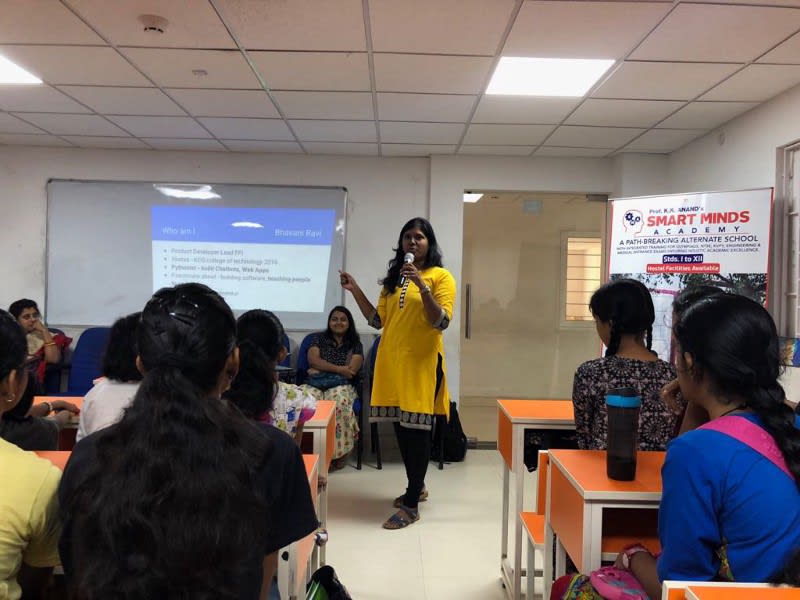 Careers and Beyond — Sai Ram Institute of Technology

Narendra Santhosh Nagarajan — A passionate student from Sai Ram Institute of technology. I knew from the famous IOT Geeks meetup. It was around the time when campus interviews were in and out of their college. The effect of my previous talks made him believe that it would help his peers if I share my journey with them. And so, I shared the story of how flunking my Infosys interview was a good thing. Because if my math was up to par and I had joined Infy, I never would have delivered that talk. 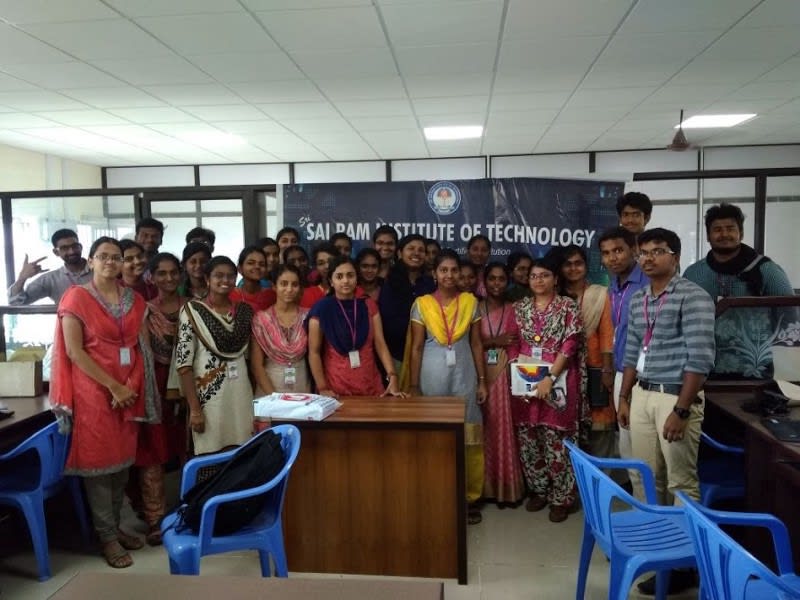 It was around the time when I was working on a new chatbot project. iKeepLog — A chatbot that logs your everyday work. I was doing some product design and was looking for chatbot frameworks that would fit the purpose. iKeepLog has a unique requirement where you can’t be sure what the user is going to type — it is what I call a “free-text”. I had to do a few hacks with Dialogflow to achieve it, which later became another talk.

The plan was to present it inWomentechmaker’s International women’s day celebration. Two days before the eventMagesh contacted me and asked if I can give a lightning talk for the ChennaiGeeks reunion and I crunched this 30-minute talk to 5 minutes and delivered it. 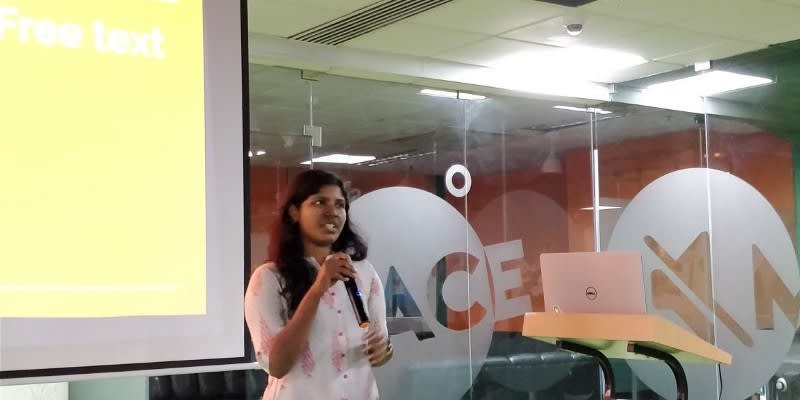 The School of AI — Machine Learning Behind Chatbots

When I was first introduced to #100DaysOfCode, I immediately wanted to do it. The first trail went in vain after 35 days because I didn’t plan for 100Days. I tried a couple of ML projects and got to a point where I gained an intuitive understanding of how ML works.

In the next #100DaysOfMLCode challenge I completed the blog series which was mentioned in the earlier section, which was then turned into this talk. 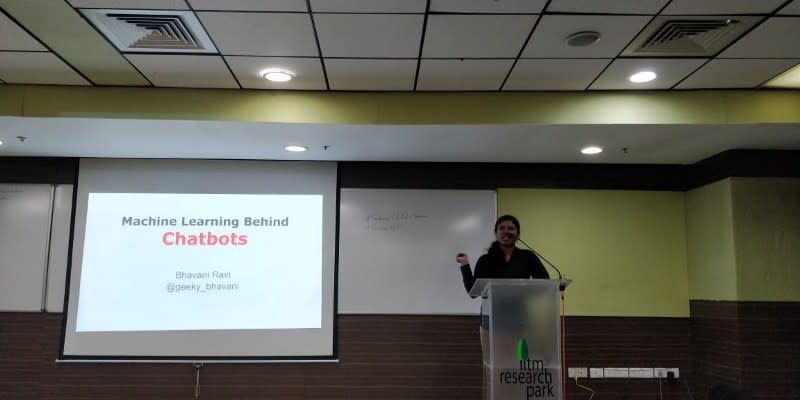 KCG happened because of the previous Hindustan event and also since they belong to the same family. KCG is even close to my heart because I am an alumnus and I met my mentor there. This time, I didn’t bore them with my talk. Instead, I introduced them to python turtle and made them draw cool stuff, thereby getting them hooked to programming. 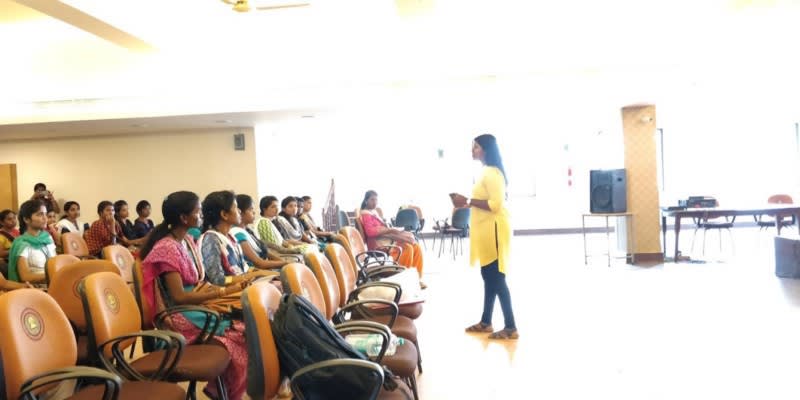 Early this year, I got an opportunity to run a 2-Day hands-on Python workshop at Forge for their batch of Protostem. This was the first time I traveled alone to deliver a workshop all by myself. Workshops, unlike talks, are more intense in the amount of preparation and delivery.

I got close to a lot of people this year, and I am so proud as the list is so diverse. We have a CEO, few writers, a marketer, a bunch of techies, community members, and more. Each of them has an amazing set of skills and are great at what they do. There is always something new to learn from each one of them. 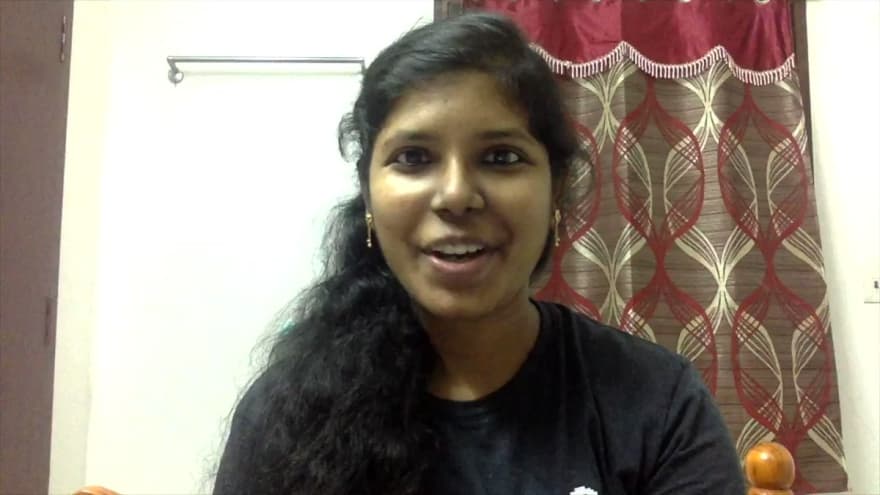 "If you can't FIND any motivation then BE the motivation!" 😎

@geeky_bhavani who leads two communities - Women Techmakers Chennai & Build2Learn has a strong #MondayMotivation message for you...

In 2018, I made it a ritual that I spend time looking atStack Overflow questions at least once a day. Every time I end up with a problem, I raised a question in StackOverflow. Slowly I started earning points and here is its result

I wanted to explore all the dimensions of writing during this 100 days and I think I have accomplished that.

Notes to my Future-self

With this, I am super excited for 2019 and already filling up my bucket list. I would like to conclude this long blog with hearty thanks to all the souls who have made my year wonderful.

Hold the clap button. If you would like to be featured in my 2019 blog, get in touch with me (I practically live in twitter)

How to look for a job?

PHP in a Nutshell, for beginners.

Once unpublished, this post will become invisible to the public and only accessible to Bhavani Ravi.

Thanks for keeping DEV Community safe. Here is what you can do to flag bhavaniravi:

Unflagging bhavaniravi will restore default visibility to their posts.