In the first post for this series, I described DNS being both hierarchical and decentralized. In this post, we will dive into what that really means.

Hierarchy is obtained through levels of domains, starting at the root server (represented by a period "."). 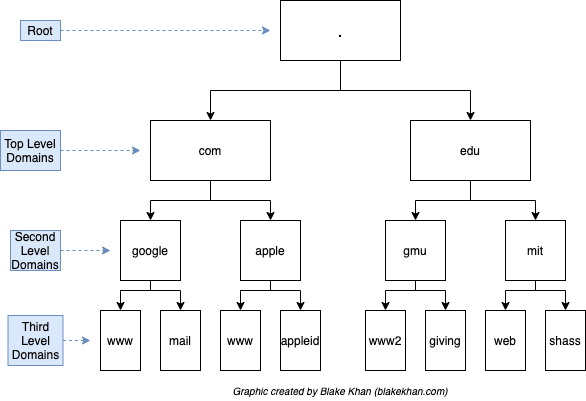 You may have heard of top-level domains (TLDs) before. Some examples of TLDs include:

They are called top-level domains because well, they are at the top level (excluding the root)! Organizations can register second-level domains under any valid TLD.

In the above graphic, I introduced a new DNS concept called the root server. The root is the base of the DNS hierarchy tree. While I described it as a single point, it is actually more than that.

ICANN appoints operators for these 13 root servers. There are 12 total operators.

You may be asking yourself, how do hosts and resolvers know about these 13 root servers? The answer is simple: they're hardcoded!

You can view the locations of all the root zone servers here.

This hierarchical structure of domain levels permits decentralization too. DNS is decentralized in terms of not a single party is responsible for providing the nameservers at each level. 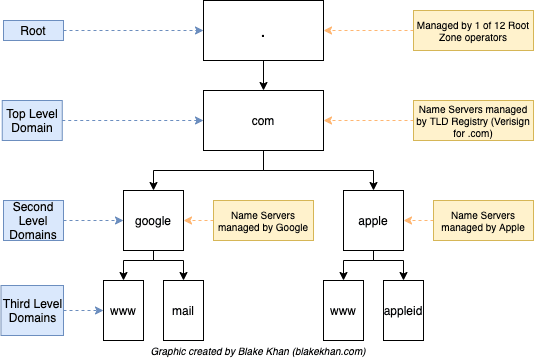 Since the scope is limited to that particular second-level domain, the registry of the TLD does not need to operate this, and instead, the responsibility is given to the second-level domain registrant to provide this functionality.

If the domain registrant does not want the responsibility of providing their own nameservers, there exist third-party companies that offer managed DNS services. Cloudflare is one of the largest managed DNS providers. Most registrars also offer this service.

We can make a few observations about DNS from the fact that it is both hierarchical and decentralized.

Firstly, DNS is scalable due to its hierarchy. By having "zones" of TLDs, the infrastructure for each zone can be spread out and independently scaled. This is great because some TLDs have more registrations than others.

Secondly, since the hierarchy begins with the root, and the root is represented by a period, the fully qualified domain name (FQDN) technically ends with a period too. This is official and was documented in RFC 1034. You can try it out in your browser and verify that it still works:

Finally, FQDNs are parsed from right to left. This is because the root starts on the right-hand side, and the lowest level is on the left-hand side.

The Easy Way to Verify Domain Ownership with Google

Should I use database index or not?

Once suspended, blake will not be able to comment or publish posts until their suspension is removed.

Once unsuspended, blake will be able to comment and publish posts again.

Once unpublished, all posts by blake will become hidden and only accessible to themselves.

If blake is not suspended, they can still re-publish their posts from their dashboard.

Once unpublished, this post will become invisible to the public and only accessible to Blake Khan.

Thanks for keeping DEV Community 👩‍💻👨‍💻 safe. Here is what you can do to flag blake:

Unflagging blake will restore default visibility to their posts.