DNS isn't all technical. At its core, there is a lot of policy and thus jargon created. The intent of this post is to clear up some of the most commonly used jargon relating to entities in DNS. 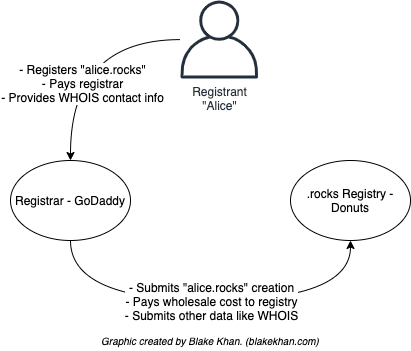 There are three main stakeholders in the DNS ecosystem. Together, they form the RRR (triple-R) Model.

Registrants are the individuals and organizations that register a domain name.

They obtain a domain name from a registrar by paying the price that that particular registrar sets. If a potential registrant thinks that a registrar's price is too high, they can look at another registrar (competition!).

Registrars are third-party organizations that "sell" domain names to registrants.

Domain names are not really sold but rather rented on an annual basis. The maximum length of a registrant’s active registration depends on the policy of the specific TLD, but usually is 10 years.

Registrars are also the bridge between registrants and registries, because they have to interface with the specific TLD's registry to submit the domain creation.

Before registrars were established, a TLD’s registry would act as the registrar. This didn’t permit much competition, so the concept of a registrar was adopted.

Some notable registrars include:

Their customers are registrars, who then sell to registrants. Since registries need to make money too, there is a wholesale cost for new domain creations, among other fees that are charged to registrars.

Some notable TLDs and their corresponding registries are:

Registrants, registrars, and registries make up the RRR model within DNS. Registrants are end-customers leasing a domain name. The organizations that offer the means to obtain a domain name are registrars. Registrars have to communicate with the backend systems of each TLD they want to offer, which are managed by the TLD's registry.

Manage an Authoritative DNS Server on Kubernetes with Helm and Fleet

Once suspended, blake will not be able to comment or publish posts until their suspension is removed.

Once unsuspended, blake will be able to comment and publish posts again.

Once unpublished, all posts by blake will become hidden and only accessible to themselves.

If blake is not suspended, they can still re-publish their posts from their dashboard.

Once unpublished, this post will become invisible to the public and only accessible to Blake Khan.

Thanks for keeping DEV Community 👩‍💻👨‍💻 safe. Here is what you can do to flag blake:

Unflagging blake will restore default visibility to their posts.