Create React App is one the most popular tools for creating React app.

This post presents a quick guide to set up a React app with this tool and configure some of its more important features.

The only prerequisite for using this tool is having Node.js version 6 or superior installed.

Use one of the following commands to create a new app:

These commands create a directory with the given app name of the app, an initial project structure (see the template here) and install hundreds of packages as the dependencies.

Now, if you look at the generated package.json file, you’ll only see three dependencies: react, react-dom, and react-scripts.

react-scripts is the library that handles all the configuration and brings most of the dependencies of the project, like babel, eslint, and webpack (if you’re curious, see the complete list in its package.json file).

Understanding react-scripts is the key to understanding the inner workings of Create React App.

Upgrading the versions of the dependencies

One of the advantages of having so few dependencies is that they are easy to upgrade (or downgrade).

You only have to execute npm install with the flags — — save — -save-exact to specify the exact version. The package.json will be updated and the new versions of the dependencies downloaded.

For example, to change to the version 1.1.4 of react-scripts, execute:

Also, don’t forget to consult the changelog of react-scripts and react to look for breaking changes.

ESLint is configured by default (you can see the configuration here), and its output is shown in the terminal as well as the browser console.

Officially, at the time of this writing, you cannot override this configuration. If you want to enforce a coding style, you can install and use Prettier (it’s not integrated right now).

The only thing you can do is to configure your code editor to report linting warnings by installing a ESLint plugin for your editor and adding a .eslintrc file to the project root:

Optionally, you can add your custom rules to this file, but they will only work in your editor.

Unofficially, you can use something likereact-app-rewired to override the default configuration.

To run the application, execute npm start, which is a shortcut to:

In mac, the app is opened in Chrome if it’s installed. Otherwise, like in other OSs, the default browser is used.

In addition, errors are shown in the console terminal as well as the browser.

You can see the whole start script here.

You have two options when adding images, styles or other files (like fonts):

Everything you place inside the src folder will be handled by Webpack, which mean the files will be minified and included in the bundle generated at build time.

This also means that the assets can be imported in JavaScript:

Importing images that are less than 10,000 bytes returns a data URI instead of a path to the actual image as long as they have the following extensions:

Another advantage of using this folder is that if you don’t reference the file correctly (or if you accidentally delete it) a compilation error is generated.

On the other hand, you can also add files to the public folder, however, you’ll miss the advantages described above because they will not be processed by Webpack, they will only be copied into the build folder.

Another thing is that you cannot reference files inside the src folder in the public folder.

However, to reference the files in the public folder, you can use the variable PUBLIC_URL like this:

Or with the variable process.env.PUBLIC_URL in JavaScript:

In addition to the variable PUBLIC_URL, there’s a special built-in environment variable called NODE_ENV that cannot be overridden:

You can also define custom environment variables that will be injected at build time. They must start with REACT_APP_, otherwise, they will be ignored.

You can define them using the terminal:

Or one of the following files in the root of your project (files on the left have more priority than files on the right):

As hinted before, all these variables can be used with process.env inside a component:

In addition to NODE_ENV, there are other predefined environment variables that you can set for development settings, like BROWSER, HOST, and PORT, as well as some production settings like PUBLIC_URL and GENERATE_SOURCEMAP.

It’s common to serve the front-end and back-end of your app in the same server and port. However, you cannot do this at development time since Create React App runs the app in its own development server.

So you have three options.

The first one is to run the back-end server on another port and make requests like this:

With this approach, you need to set the CORS headers on your server.

The second one is to tell the development server to proxy any request to your back-end server by adding a proxy field to your package.json file. For example, using:

After restarting the server, you should make them like this:

If this is not enough for you, a third option is to configure the proxy of each endpoint individually, like this:

The configuration properties are the same as the ones supported by http-proxy-middleware or http-proxy.

A service worker is registered in src/index.js. If you don’t want to enable it just remove the call to registerServiceWorker().

Service workers require HTTPS (otherwise registration will fail, although the app will remain functional). However, to facilitate local testing, this doesn’t apply to localhost.

A web app manifest where you can configure the app name, icons and other metadata about your application is located at public/manifest.json.

Create React App uses Jest as its test runner and jsdom to provide browser global variables like window or document.

Test files should follow any of these naming conventions:

Executing npm test will run the tests by executing the script:

You can see the complete script here.

The tests will be run in watch mode. Every time you save a file, the tests are re-run. However, this mode also includes an interactive command-line interface with an option to enter a test name pattern to avoid running all tests.

If you just need to execute or configure something before running your tests, add it to the file src/setupTests.js, which will be executed automatically before any test.

If you need a coverage report, you can execute the command npm test --coverage, optionally configuring in the package.json file the options:

You can create a production version of your app in the build directory with npm run build, which is a shortcut to:

You can see the complete script here.

After this, you may copy the content of this build directory to a web server or you use packages like http-server or serve to test your application from that directory.

One thing to take into account is that Create React App assumes that you will host your app at the server root. If this is not the case, you need to specify the homepage field in your package.json file so the correct root path can be inferred:

However, if you are not using a router with HTML5 pushState history API or not using routing at all, you can use a dot to make sure that all the asset paths are relative to index.html:

In the user manual of Create React App, you can find instructions to deploy your app using:

Ejecting will copy all the configuration files, scripts, and dependencies to your project, while removing the dependency to react-scripts.

Here’s an extract of the output: 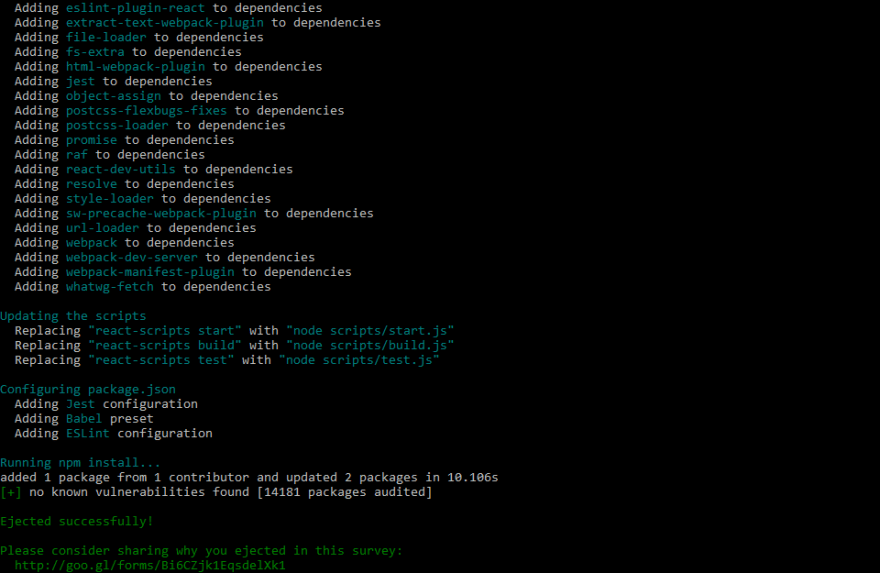 And here you can see the whole script it executes.

This operation cannot be reverted. Use it when the configuration options the tool offers are not enough for you anymore.

This post covered the most important features you may configure when using Create React App. Now you might want to take a closer look at react-scripts, the core of Create React App, to get a deep knowledge of how it works.

Also, although Create React App is a popular tool, it is not for everyone. There might be better alternatives depending on the type of application you’re developing. For example, Gatsby for static sites or Next.js for server-side rendering. Consult more alternatives here.

Finally, here are some guides that might help you: