When building apps or websites one of the most powerful tools developers have at their disposal is the ability to manipulate the DOM (Document Object Model). This post explains the basics of DOM Manipulation.

What is the DOM?

The Document Object Model, or DOM for short, is a platform and language independent model for representing HTML or XML documents. It is basically an object-oriented representation of a web page. It represents the logical structure of a web page in such a way that a programming language like JavaScript can be used to change the document structure, style and content.

Almost everything found in an HTML document can be accessed, updated, removed, or added using JavaScript code with the help of the DOM.

Before we start looking at what DOM manipulation is all about, it is important that we first study the structure of the DOM. The HTML DOM has a hierarchical tree-like structure made up of DOM objects called nodes. The very first node at the head of the DOM is the document node. HTML elements (element nodes) are added to the DOM tree beneath the Document node. Like most things in computing, DOM nodes can have various types of relationships with other nodes. A DOM node could either be a parent of another node or nodes, child of a parent node or a sibling to other nodes. Now let's see how a DOM tree looks like and we are going to use the HTML code below for this;

This is DOM tree for the HTML code above; 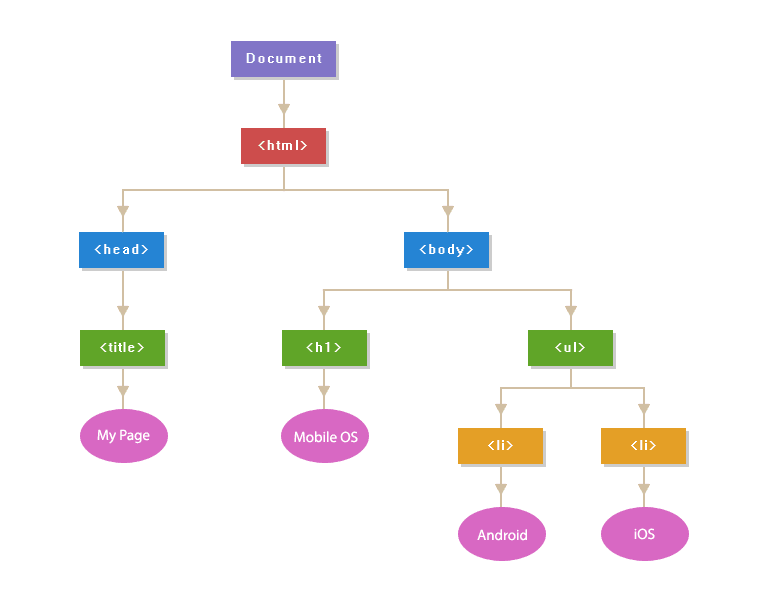 Now that we have looked at the DOM structure it is critical importance that we how we can find specific DOM node in order to be able to carryout various actions on them. We will look at how to select or find DOM elements by identifier. The identifiers include;

To select a DOM element by its ID we use the document.getElementById( ) method. This method takes in a single string which is the ID of the element that is being selected.

The document.getElementByClassName( ) method is used. It takes in a single string argument and return a live HTMLCollection of all the elements that match the given class name.

To select an element by its tag name we use the document.getElementByTagName( ) method. It takes as argument a single string representing the tag to search for.

This is done with two functions; querySelectorAll( ) and querySelector( ). They both take in single string argument that represents a CSS selector string. querySelectorAll will return a static nodeList of all the elements that match the query while querySelector returns a single element.

After looking at some of the ways in which we can select DOM nodes, let's get to DOM Manipulation proper.

Manipulating the HTML DOM is done in three principal ways which are;

Creating and Adding New Elements to the DOM

To add an element to the DOM, we need to create the element and then go on to add it to the DOM. DOM nodes can be created using the following DOM methods.

createElement() is called on the document node. It creates a new element but does not add it to the DOM. It takes as argument a string which is the tag name of the element to be created.

createTextNode is used to create text-only nodes. It is used place text in an HTML element. It takes in a single string argument and returns a text node.

To add new nodes to the DOM, the following methods are used;

If the node passed to Node.appendChild() already exist in the DOM tree, it is moved from its current position to a new position as a child of its specified parent node.

Note that reference node is not an optional argument. It is either you pass in a node or the value null.

Removing elements from the DOM

To remove an element from the DOM tree, removeChild() is used. It removes the specified child from the parent node on which it is called. It takes in a single argument and returns the child that is removed.

Updating elements in the DOM.

DOM nodes an be updated in the following ways;

A DOM node can have any of its child nodes replaced with the replaceChild() method. It is replaces the specified child node of a node it is called on with a new specified node. It takes in two arguments; the new child node and the child node that is to be replaced.

innerHTML is used to get/set HTML markup. It takes a string value which is parsed as HTML.

You can also modify by changing or updating its attributes. This is done with the following methods;

getAttribute() takes in a single string argument which is the attribute whose value we want to get and returns the value of that attribute. If the given attribute does not exist, the value returned will either be null or " " (an empty string).

removeAttribute() removes the attribute with the specified name from the element. It has no return value.

To change an element's class information, there two properties we can make use of - they are className and classList property. The className property can be used to get/set class values. The classList returns a live DOMTokenList collection of the class attributes of the element. It has the following six helper functions.

Using all of what we have looked at in this blog post can help you harness the power of creating dynamic web pages. Thank you for making it this far, you should be proud of yourself. I'll like to answer any questions or help clarify any doubt you have. Drop any question in the comment section.

Once suspended, brandonbawe will not be able to comment or publish posts until their suspension is removed.

Once unsuspended, brandonbawe will be able to comment and publish posts again.

Once unpublished, all posts by brandonbawe will become hidden and only accessible to themselves.

If brandonbawe is not suspended, they can still re-publish their posts from their dashboard.

Once unpublished, this post will become invisible to the public and only accessible to Brandon Bawe.

Thanks for keeping DEV Community 👩‍💻👨‍💻 safe. Here is what you can do to flag brandonbawe:

Unflagging brandonbawe will restore default visibility to their posts.