Package can be added using yarn:

The tutorial includes many demos, as well as instructions for finding and preparing sound effects. It’s a great place to start.

You can also view the storybook, which includes lots of quick examples. 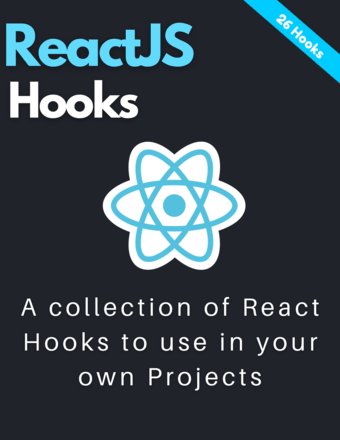 Get the Book: Collection of React Hooks PDF

This demo only plays the sound while hovering over an element. The sound pauses when the mouse leaves the element:

NOTE: Many browsers disable sounds until the user has clicked somewhere on the page. If you’re not hearing anything with this example, try clicking anywhere and trying again.

With the playbackRate option, you can change the speed/pitch of the sample. This example plays a sound and makes it 10% faster each time:

It produces an array with two values:

When calling the function to play the sound, you can pass it a set of options (PlayOptions).

Let’s go through each of these in turn.

When calling useSound, you can pass it a variety of options:

[delegated] refers to the fact that any additional argument you pass in HookOptions will be forwarded to the Howl constructor. See "Escape hatches" below for more information.

When calling the hook, you get back a play function as the first item in the tuple:

You can call this function without any arguments when you want to trigger the sound. You can also call it with a PlayOptions object:

The hook produces a tuple with 2 options, the play function and an ExposedData object:

An audio sprite is a single audio file that holds multiple samples. Instead of loading many individual sounds, you can load a single file and slice it up into multiple sections which can be triggered independently.

There can be a performance benefit to this, since it’s less parallel network requests, but it can also be worth doing this if a single component needs multiple samples. See the Drum Machine story for an example.

For sprites, we’ll need to define a SpriteMap. It looks like this:

SpriteMap is an object. The keys are the ids for individual sounds. The value is a tuple (array of fixed length) with 2 items:

We can pass our SpriteMap as one of our HookOptions:

To play a specific sprite, we’ll pass its id when calling the play function:

Howler is a very powerful library, and we’ve only exposed a tiny slice of what it can do in useSound. We expose two escape hatches to give you more control.

First, any unrecognized option you pass to HookOptions will be delegated to Howl. You can see the full list of options in the Howler docs. Here's an example of how we can use onend to fire a function when our sound stops playing:

If you need more control, you should be able to use the sound object directly, which is an instance of Howler.

For example: Howler exposes a fade method, which lets you fade a sound in or out. You can call this method directly on the sound object:

Consider This Before Starting Your Spotify API Project

Once suspended, bricourse will not be able to comment or publish posts until their suspension is removed.

Once unsuspended, bricourse will be able to comment and publish posts again.

Once unpublished, all posts by bricourse will become hidden and only accessible to themselves.

If bricourse is not suspended, they can still re-publish their posts from their dashboard.

Once unpublished, this post will become invisible to the public and only accessible to bricourse.