Last weekend we had pleasure to co-organise and take part in IOTA Hackathon, the event during which software developers from all over Europe came to put to test IOTA Platform with different use cases. IOTA Hackathon was held from 17 to 19 November and was sponsored by IOTA, Baltic Data Science (blockchain and big data service), Datarella (blockchain and big data consultancy) and Bright Inventions.

The hackathon started with the preceding keynote presentations of Chris Dukakis from IOTA and Jamie Burke from Outlier Ventures. Both presentations were in fact a great parallel track of workshops for newcomers as well as all participants. After getting familiar with IOTA, brainstorming sessions and resolving many doubts, participants chose the ideas they wanted to focus on, formed groups, took out their laptops and dived into the IOTA world competing for 4200 IOTA in prize money. 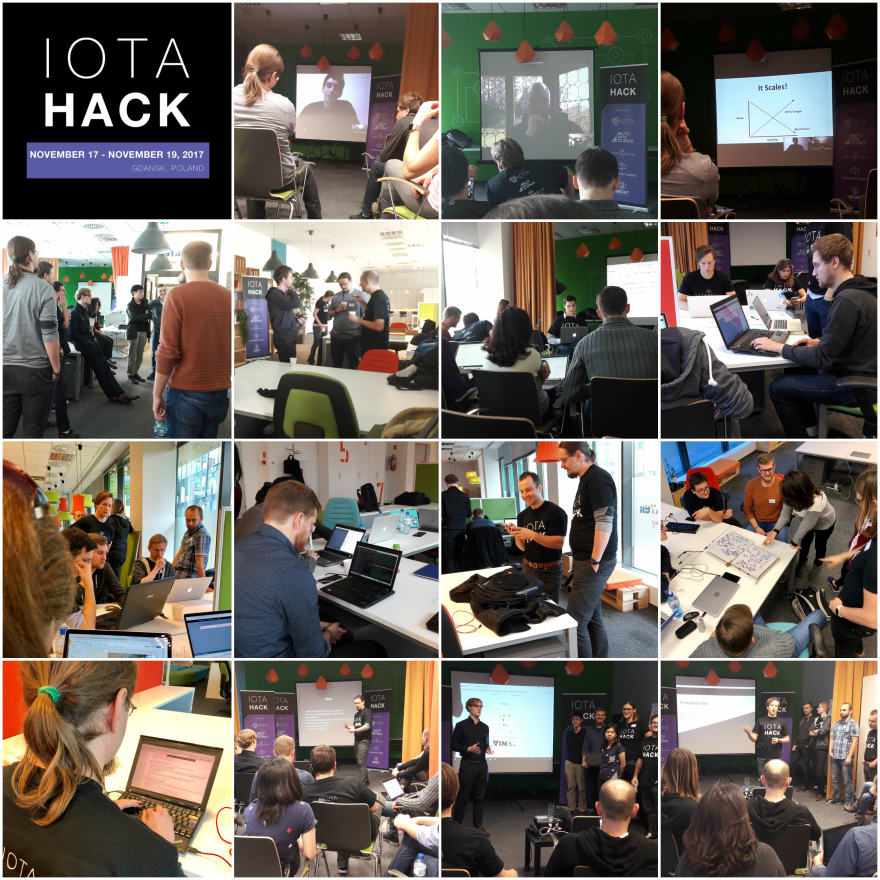 And how about the output? In terms of quality the output was much better than someone may expect - three independent projects, each resolving real-life problems.

The team placed 1st in the competition "PlugInBaby” provided a link between an IoT network of decentralised charging stations and traditional or autonomous cars needing charging services and created an open car charging station. You can find out more in the summary of the iteration process and the associated pivot that took place while defining the project topic (and here more details about the development and design of the project itself).

The runner-up team “Freedom Pass” faced a real challenge brought by Bogdan Vacusta from London Council. Freedom Pass is an initiative allowing disabled residents to use public transport in London free of charge. Prior to the issuance of a Freedom Pass, one must just obtain a doctor’s certificate to prove disability, however, there are a lot of scammers who photoshop doctor’s certificates to get a free pass for themselves. The team decided to build a Proof of Concept to prevent this kind of fraud. With the help of IOTA they created an alert that could save the London public millions of pounds per year (read more).

The team placed 3rd in the competition used IOTA to create a kind of internal system consisting of temperature sensors that use IOTA Tangle to communicate with each other. If using a standard system, some problems were encountered while trying to synchronise the network of devices. Each device has its own designated address generated from a designated seed used to send transactions between parties. In IOTA it is possible to send transactions with zero value that contain some messages, and exactly this feature was implemented here. Firstly used on the test net, but the plan is to apply that in the main net (read more).

You can watch all the IOTA Hackathon presentations here.

One may ask if it is a real fun spending two days in front of computer with a bunch of strangers. The example of IOTA Hackathon shows that it is indeed. Hackathons do not always have to involve unhealthy competitive structure. They should provide the participants with the opportunity to learn something new and to make a headway on issues they are interested in. A real hackathon is just the beginning of a long journey to solve real-life problems. During IOTA Hackathon there was no place for unrealistic expectation or pressure. People who did not know each other met and started discussing and cooperating as effectively as if they had done together dozens of projects before. It was all about helping each other, expanding knowledge and improving (or even discovering) your own skills, not about winning. Because during the most successful hackathons everyone wins.

Originally published at brightinventions.pl on November 24, 2017.

Where the wild code grows