Ben Holmes (the creator of Slinkity) posted on Smashing Magazine today about the creation of the Slinkity plugin for 11ty. After reading it, I had to give Slinkity a try. 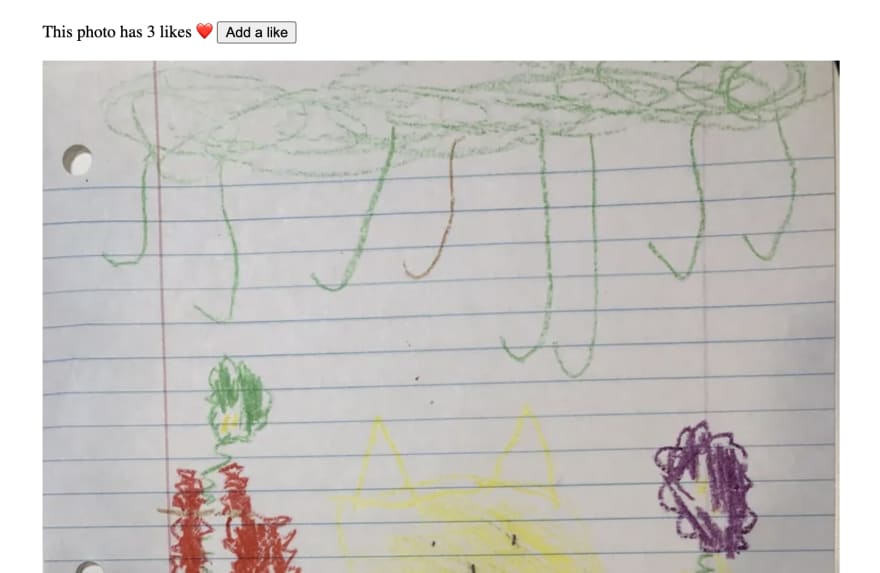 My almost-6-year old has a little art website that I set up for him. Originally, it was just HTML. Then he made more art, so I converted to 11ty with a Sanity Studio for image management.

Like any adolescent, there's always a desire for more. He wanted a "like" button to know how many people liked his art. Despite explaining to him that I was really only sharing the site with his grandparents and that he wouldn't get too many likes. I promised I'd implement the feature if he consistently drew pictures for it.

He's done a good job, so I needed to write the feature...

Downside: I had no build process. Upside: A chance to see what folks were using for tiny interactions!

I reached out on Twitter to see what folks thought. Even on a weekend, there were opinions.

If you had no JS on your page and wanted to make a stateful button to show (and increment) likes pulled and stored in a db, what tool would you reach for?

From "Roll your own in JS" to "web components" to "petite vue" and more. All great suggestions. I started with very simple JS event handlers, but it was pretty messy code. I moved on to a web component, but, as I usually do, I got frustrated by the feel of web components (I really want them to be awesome).

I want to learn more about AstroJS, so I started re-writing the site in Astro (since there wasn't much functionality yet). It went relatively well, but the data pipeline is still pretty rough around the edges. I was able to get my Sanity content pulling in, but not without some annoyances (that the Astro discord helped me get through, I should add!).

Fast forward to Ben's post and my realization that Slinkity had the same ideas as AstroJS about islands of static content and rehydrated content (which I totally think is the future of the web... and maybe it's the past, too...).

Expect a bigger tutorial on Slinkity coming up, but for now, here's a bit of code for how I implemented a very simple "Like" button for my son's images.

After I set up my Sanity connection, I had an image.html template that set up individual pagination for detail pages for each of the images – much like a blog post template. This is where I wanted the like button.

I kept things VERY simple (it's a site for a 6-year old after all!). Basically, a template to show an image with a caption. Quick aside, the imageUrlFor shortcode comes from my alpha Sanity Image plugin.

Next, I needed to install the Slinkity package and change the way I was building and serving my site. What Slinkity does is creates a build process that runs your 11ty instance and then runs a Vite server on the _site directory (or whatever your config file says is your output directory).

Once that was installed, I was ready to create a React component and insert it into my template.

The component and the react shortcode

To add the component, I needed to create a components directory inside my _includes directory. In that directory, I added a LikeCounter.js file.

The react shortcode accepts a number of arguments that will be ingested as props. In this case, I pass the likeCount and id.

In about an hour, I had a working React component and a new build pipeline. I got to keep all the things I love about 11ty.

I'd originally planned on using this as a way to test and play with AstroJS. I really enjoyed playing with it in this use case, but the data pipeline was a bit rough to deal with for ingesting data from Sanity. I know the Astro team is currently working on the data pipeline, so I'm confident that for use cases like this it'll be a great solution soon.

More than anything Astro felt like a good bridge between the world of 11ty and the world of frameworks like Next. It felt kind of like I was writing Next code next to 11ty code, which was nice.

I think both these advancements are 100% the future. Slinkity gets the advantage of the current 11ty ecosystem and tooling.

Right now Slinkity is just compatible with React, but I know the team is working on integrating with other libraries (and even vanilla JS, which I'm excited about!).

For now, I've got some additional ideas for using Slinkity to add more interactive islands with no need for a large build process, which is super exciting to me.

Once suspended, brob will not be able to comment or publish posts until their suspension is removed.

Once unsuspended, brob will be able to comment and publish posts again.

Once unpublished, all posts by brob will become hidden and only accessible to themselves.

If brob is not suspended, they can still re-publish their posts from their dashboard.

Once unpublished, this post will become invisible to the public and only accessible to Bryan Robinson.

Thanks for keeping DEV Community 👩‍💻👨‍💻 safe. Here is what you can do to flag brob:

Unflagging brob will restore default visibility to their posts.