A quick cheat sheet of the most common elixir syntax.

This is a brief guide using the Pareto Principle (80/20 rule) to the most common Elixir syntax you’re going to encounter. If you want a crash course or a quick refresher on common Elixir concepts, then this article is for you.

Getting started with Elixir

Skip this section and move on to data types if you already know how to run elixir code.

You can choose to run elixir using a Repl (an online code editor) by executing .ex files on your computer or in the Interactive Elixir (iex) environment.

If you’d like to get started with Elixir quickly, you can use a website to run elixir code in a web-based code editor.

Running Elixir on your computer

You can also install Elixir onto your computer and then run elixir files (.ex) directly.

You may be using a different editor, but it should look something like this: 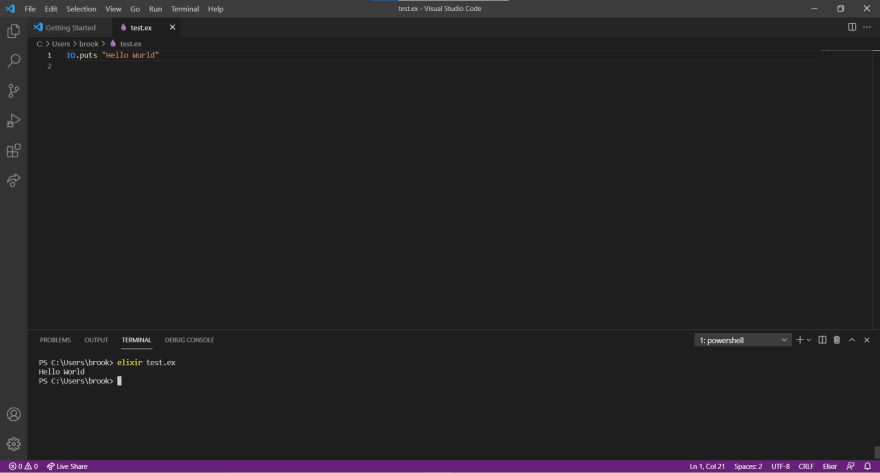 You can open the Interactive Elixir environment to experiment with Elixir code. You must already have Installed Elixir on your machine.

In Elixir will commonly encounter the following data types:

Variables allow you to store data to be referenced throughout your application. In Elixir, you can define a variable as such:

Variables in Elixir use snake_case. A variable can store any data type; it is not restricted to the examples above.

Comments in elixir use #. There is no multi-line comment for Elixir.

Strings in elixir are series of Unicode Characters written between double quotes “”.

Writing double-quotes inside of a string

you can put double-quotes inside of a string using backslash \

Elixir code can execute inside of a string using #{}.

You can access string-related functionality with the built-in String module.

Elixir provides a variety of mechanisms to operate on integers and floats.

Elixir provides functions rem and div for working with integer division and remainder.

Used to compare booleans only:

less than or equal ≤

true, false, and nil are all atoms which Elixir allows you to skip the leading colon (:).

Lists in Elixir are implemented as linked lists. Linked lists hold zero, one, or more elements in the chosen order.

Add and Subtract lists with ++ and --

A common use of Tuples would be to store known values in an expected order. For example, you might have a tuple for a user with {name, age, city}

You can access tuple-related functionality with the built-in Tuple module.

Maps are a key-value data structure in Elixir. The keys in a map must be unique, unlike with key-value lists.

You can access map-related functionality with the built-in Map module.

For example, you can avoid the non_existing_key error above by using Map.get:

You can use a special syntax to update map keys. You can only update existing keys.

Conditional statements are used for branching logic in your application.

Ternary is a handy shorthand for if/else statements.

case takes in a value and executes a different path in the case statement depending on the value. It may be helpful to relate case to switch-case statements found in other languages.

Variables in a case statement

You can use variables to represent values in the case argument. See n in this example:

cond executes the code for the first true condition. It is a lot like case, except instead of evaluating a single value and executing the path that matches the value, you can define various conditions, making this conditional statement much more versatile at the possible expense of clarity.

Modules provide a way to organize the behavior of your program. For example, you might have a Greeting module with a say_hello function to return “Hello”.

How to create a module and function


You’ll notice that modules are CapitalCase and functions are snake_case.

Calling a function from inside the same module

You do not have to reference the Module when calling a function from inside the same module. So Greeting.say_hello becomes say_hello.

One really cool feature of Elixir is to treat two functions with the same name but different parameters as two different functions. For example, the Greeting.say_hello function can be referred to as say_hello/0. 0 because it didn’t take any parameters.

A function that returns a boolean should end with a question mark (?)

Use brackets when you think it adds to the clarity of the code, or don’t!

Handling functions with context using when

You can use when syntax to say what should happen under a specific condition.

The order of your functions matters, as the first function to be true always runs first. Here’s an example of when used with the wrong function order.

Elixir provides directives for reusing modules in your project.

It’s important to note that Elixir is a compiled language. It is usually compiled using a tool called mix. So unlike a language like Javascript or Ruby, you do not import one file into another. Instead, modules are compiled together and can be accessed from any .ex files in the project.

alias allows you to import a module into another module and access it using a different name. This is commonly used to access nested modules more conveniently.

import is used to conveniently access functions from other modules.

For example, here is how you would access the puts/1 function from the IO module.

use allows you to inject functionality from one module into another.

Initially, you will most often use…use… 😅 with modules from third parties. For example, to write tests with the ExUnit framework, you will use the ExUnit.Case module

use is a reasonably complicated topic, and it’s good enough if you understand it at a surface level early on. For further reading, see an elixirschool tutorial on use or read the documentation.

In Elixir, the = symbol is called the match operator. It is useful for assigning simple values, or it can also destructure more complex data types.

If your destructuring doesn’t match the right-hand side value, you will get a MatchError

Hopefully, this article helps you rapidly get familiar with some of the most important bits of Elixir.

I left out a lot to keep the article concise. To learn more, the Elixir Documentation is a great place to start.

Please comment if you notice any inaccuracies or if you think there’s some other Elixir syntax I should have covered. You’ll be helping me and everyone else reading this!

Once suspended, brooklinmyers will not be able to comment or publish posts until their suspension is removed.

Once unsuspended, brooklinmyers will be able to comment and publish posts again.

Once unpublished, all posts by brooklinmyers will become hidden and only accessible to themselves.

If brooklinmyers is not suspended, they can still re-publish their posts from their dashboard.

Once unpublished, this post will become invisible to the public and only accessible to Brooklin Myers.

Thanks for keeping DEV Community 👩‍💻👨‍💻 safe. Here is what you can do to flag brooklinmyers:

Unflagging brooklinmyers will restore default visibility to their posts.