TL;DR version at the bottom!

A new feature has been enabled in Mozilla Firefox 71 after being supported behind a pref for a while, the subgrid value of grid-template-columns and grid-template-rows allows you to create a nested grid inside a grid item that will use the main grid’s tracks. This means that grid items inside the subgrid will line up with the parent’s grid tracks, making various layout techniques much easier.

Here you can watch a short video which will explain perfectly how this new feature work, so you are prepared for everything!

Also, at Can I Use shows how this technology is evolving. As you can see, there is a long way to go, but is already supported in one of the main navigators people use, so is worth taking a look on this new feature.

Now this unalignment is not permitted: 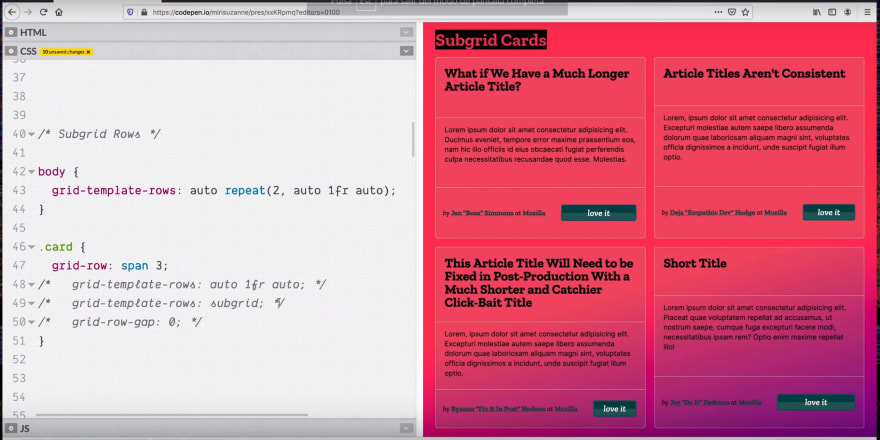 Because we can do THIS easily now.

Got the information from:

Good luck on your grid journey 👀✨

Once suspended, brownio will not be able to comment or publish posts until their suspension is removed.

Once unsuspended, brownio will be able to comment and publish posts again.

Once unpublished, all posts by brownio will become hidden and only accessible to themselves.

If brownio is not suspended, they can still re-publish their posts from their dashboard.

Once unpublished, this post will become invisible to the public and only accessible to Antonio Djigo.

Thanks for keeping DEV Community 👩‍💻👨‍💻 safe. Here is what you can do to flag brownio:

Unflagging brownio will restore default visibility to their posts.