When you’re building a website that needs to be updated in real-time, your first thought is probably to add WebSockets to your application. In this article, you will learn how to add MQTT to your angular web application.

However Websockets is a low-level protocol and to use it, you’ll need to add another layer on top to manage the information you want to get. This is where MQTT protocol is handy, as it’s a higher-level protocol that simplifies working with data streams.

MQTT means Message Queuing Telemetry Transport. It’s a connectivity protocol used in the IoT world to communicate between machines, but has a whole load of other applications too. You can read more about MQTT on Wikipedia and also on the official MQTT site.

An MQTT protocol ecosystem has the following components:

As we have seen in the architecture overview, MQTT uses the publish/subscribe methodology. So they don’t know each other, they just need to agree on how data is going to be sent. It also allows the use of multiple publishers or subscribers, so various clients can create an MQTT connection and subscribe to data from a single device.

An MQTT Topic is the concept used to communicate between publishers and subscribers. When a subscriber wants to get data from a device, it subscribes to a specific topic, which will be where the device publishes its data. A Topic is a hierarchical UTF-8 string, and here you have an example:

In the introduction, we said that MQTT is a high-level protocol and the great thing is that it can use different protocols to get its job done. It can adopt its own MQTT protocol, but this protocol is not supported by web browsers; however MQTT can also be used over WebSockets connection, so we can easily use MQTT on any web browser that supports WebSockets.

Which MQTT Broker Should I Use?

There are various MQTT brokers you can use for your project. On one hand you can use cloud/hosted solutions; alternatively you can choose an on-premise option, either by installing on your own servers or using through Docker. You can see a comprehensive list of the existing brokers in this Github repo. In our case we have used the open source Eclipse Mosquitto with great success.

Now let’s see how can we use MQTT protocol on an Angular app. The easiest way to do it is to use some of the existing Javascript libraries. In this case, we will use the ngx-mqtt library. This offers support for Javascript/Typescript observables, so it’s really helpful when writing an MQTT client on an Angular app.

You have all the information on the library site, but it’s as easy as installing the npm packages.

Once the library is installed, you need to initialize it. You can follow the instructions on the ngx-mqtt site, but you will probably have multiple environments in your Angular code, so you will need a different configuration for each environment. So let’s create an mqtt section in our environment files. Here’s an example: src/environments/environment.prod.ts

You can edit all other environment configuration files to set the right values for each one. Now we need to initialize the MQTT library, and for this we recommend changing to app.module.ts:

With this you can now start using MQTT in your app, but to achieve a more structured code we recommend you create a service class for each Topic you are going to use. Let’s create a service that subscribes to a topic called events , where the Topic name is similar to /events/deviceid. For this we create the Typescript file src/app/services/event.mqtt.service.tswith the following code:

Using this service class, we have all the MQTT-related code in a single file and now we only need to use this service when it’s needed.

Remember to add all the services files to the providers section of your AppModule, otherwise you won’t be able to use them.

Now it’s time to use the MQTT services we have created. So, for example, let’s create an EventStream component that prints all the events that a device generates. The code of this file will be similar to:

It’s important to remember that we need to unsubscribe from the subscription when we destroy the component.

Now, we should have an Angular app that can subscribe to MQTT topics and show the user the information every time a device generates an MQTT message.

When working with Angular and MQTT, there are more moving parts than in common Angular apps where you have your Javascript frontend and a RESTFul API to consume (usually also a Javascript backend). We can list a few extra things you need to take care of: 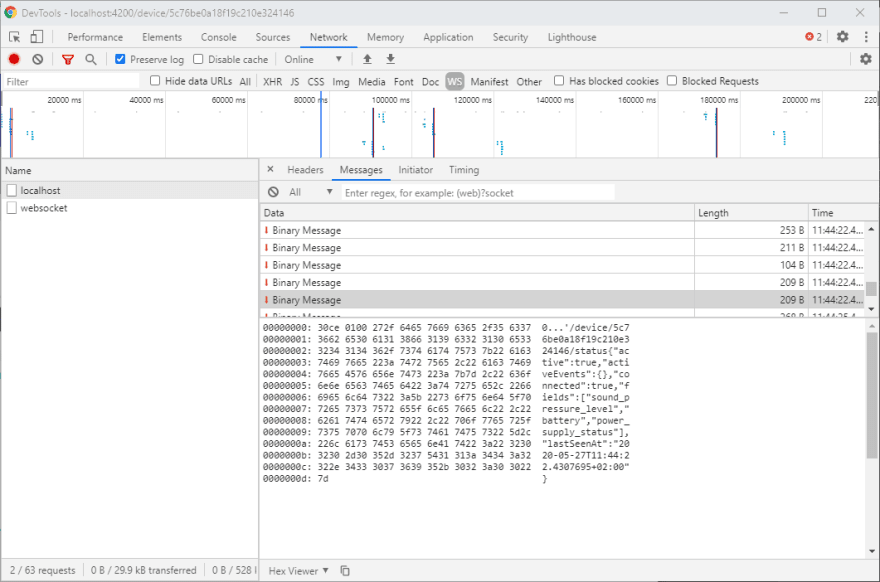 Google Chrome Websockets debugging. As you can see, information is hard to read because it’s shown in binary format.

This is why Bugfender can be really helpful in debugging MQTT Angular apps. You’ll probably experience some bugs when developing the app and trying to use it in the production environment, and probably also when the app is used in the real world.

If you use Bugfender, you’ll be able to get all the Javascript exceptions that occur among your final users and if a device breaks your code, you’ll also be able to inspect the MQTT data that individual devices are sending. Moreover, Bugfender sends all console logs to our serves so you can see everything that’s happening in your Javasacript app remotely.

If you want to know how to install Bugfender in your Angular app, you can check the BugfenderSDK Angular App Sample.

Initiate the library in your AppModule :

If you don’t have an App Key you can get a free one just signing up in Bugfender.

We recommend you install a custom error handler so if there’s any Javascript exception, this is sent to Bugfender.

Now, let’s update our component. We send the MQTT messages we get to Bugfender, so later we can check whether there’s any problem with the information sent by a particular device.

We also recommend that you add a log when a subscription to a topic is created, so you will know which device is causing problems. 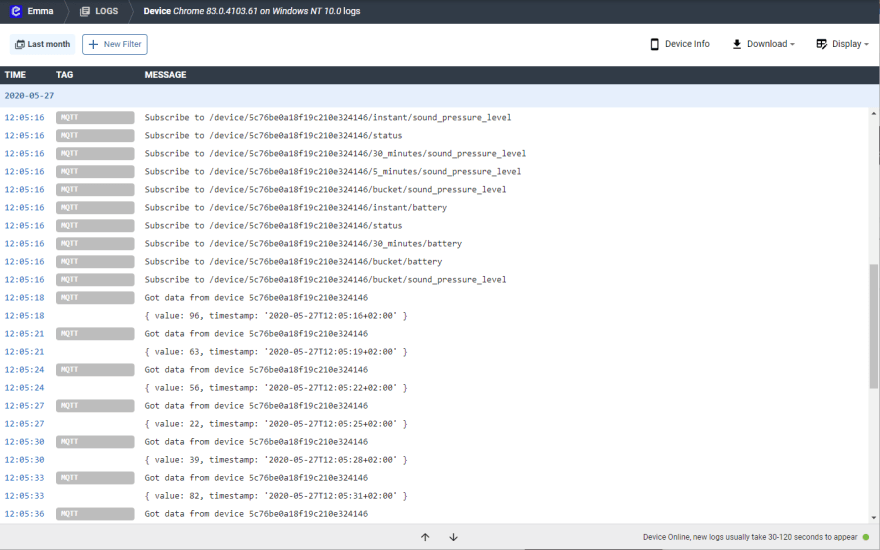 As you can see in the screenshot, we can easily identify the sensor that is sending the data and the data that is being sent.

The good thing about using Bugfender is that you can enable or disable specific devices, so you can enable a certain device when you know there’s a problem and won’t waste logs with useless information.

The Bugfender JS SDK is our new SDK to complement the native iOS and Android SDK. We are continuously creating new tutorials and content to help the JS developer community. If you want to be notified when new JS tutorials are available you can join our quarterly newsletter in the box below.