Currently there is a high market demand for the creation of mobile solutions to meet customer needs, and for that frameworks and tools like Ionic, React Native and Flutter provide good solutions and facilities to build and deploy our Apps adding store facilities like Play Store and App Store (not so easy) which offers us good platforms and APIs to make the job of deploying, testing and monitoring easier. However if you are working or managing large teams and your App does a lot of builds and deploys, using only these approaches may not be efficient and quite problematic. With this in mind my goal in this article is to demonstrate the complete creation of CI/CD pipelines to test, build and deploy an Ionic hybrid application using Azure Pipelines, Github and Visual Studio App Center that can distribute the apk to Play Store.

For the steps that will be shown here, you need the following prerequisite:

Note: I'm using a docker image created by beevelop and you can be found here, this will simplify our setup because the image already contains the essencial tools like nodejs, android build tools, cordova, gradle etc..., but isn't necessary in this case if you don't want to.

If you don't want to install the full android studio, you can just download the Command line tools which can be found on the same Android Studio Download page, and configure in the PATH, see the example.

This tool need jdk or jre installed as well, all the necessary information is present in the official documentation, i really recommend that you use a docker image that can be found here. On the other hand you need configure in PATH, see the example.

Note: These tools like Cordova, Android Studio, Android Sdk Tools and gradle are optional to making local tests, basically all of these tools are available on Hosted Microsoft agents that we are going to use.

First let's create the App using ionic cli to start a simple app with Tabs, so execute ionic start SampleApp tabs --type=ionic-angular --cordova, this makes it explicit that we want to use Angular and cordova, after that you can navigate to the app folder using cd SampleApp, the structure should look like this: 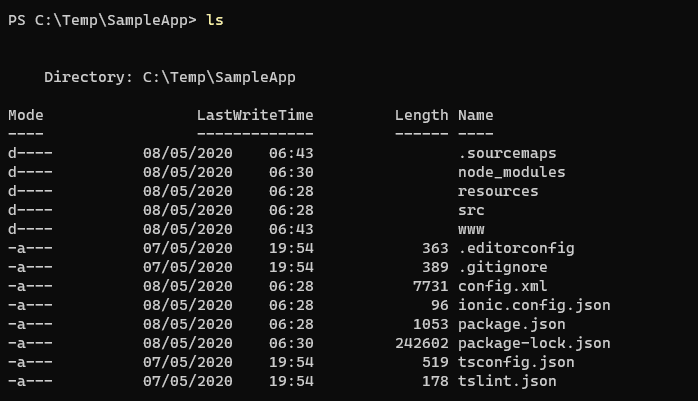 At this moment the App was successfully created, now the next step is to test the App locally in the browser to see what the initial structure looks like to do this run ionic serve this command automatically open the App (simulated) in the browser, it is also possible to choose the port, browser and other options see more running ionic serve --help. After these steps you can change the App as you wish to differentiate from the template created automatically by ionic.

Note: It is also possible to use a docker container to create the initial structure of the App (e.g. docker run -it --rm -v $($PWD):/usr/app beevelop/ionic:latest ionic start SampleApp tabs --type=ionic-angular --cordova) note that in this case the variable $PWD is used, this variable contains the name of current working directory.

Finally you can modify the App as you wish, to do this use Visual Studio Code or any text editor of your choice.

Creating a repository on github and pushing the App code

To create a repo to the App on Github, first log into your account and select New repository , fill in the fields then choose the one of these two options:

Keep the Initialize this repository with a README option unchecked because we're importing an existing repository, if you filled everything in correctly, the fields should look like these: 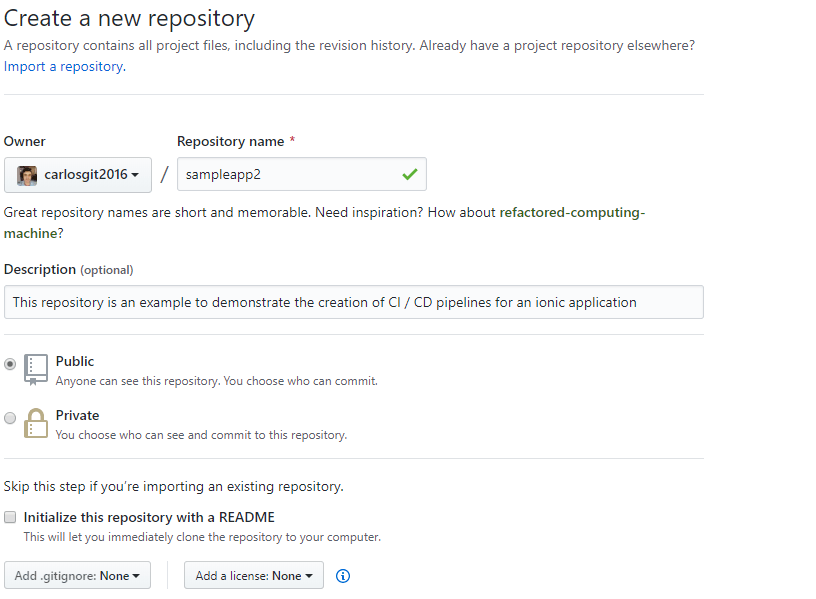 Go back to the terminal and navigate to the App code and run these commands:

Now you have a repo created and the code inside it, in the next steps we will talk a little bit about Azure DevOps and how to create and configure pipelines.

Creating a project in Azure DevOps

Azure DevOps is a powerful Service (or on-premise) that offers support to teams plan work, collaborate with code development, build, deploy, tests and create and manage many different kinds of integrations to Azure or third-party services by default, such as Jenkins, Chef, Nuget and others. To learn more access the official microsoft documentation to see all possible capabilities.

Just fill in the Project name field and click on New project , you can check the project created to this article here.

To manage pipelines Azure DevOps provides the Azure Pipelines that can be used to automatically build, tests and deploys supporting any language or project types, in our case we will use to create three pipelines to build, test and deploy our App.

Note: Don't necessarily have to be three pipelines, this separation is only logical

Azure DevOps has a division between Build and Release Pipeline, the first one is generally used to generate one or more artifacts using the source code of the project and the second one is more common used to deploy this artifacts generated. The two next topics explain how to create two Build Pipelines and one Release Pipeline to deploy the App.

Then to create the first pipeline that is responsible for building (Angular part) and testing the App, follow these steps: 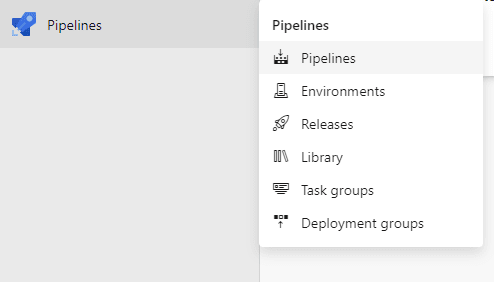 At this point Azure DevOps will redirect you to the github page for you accept and install Azure Pipelines app.

If everything is ok, some templates will appear to choose one, let's start from scratch.

Finally you can see the minimum pipeline structure, delete all lines and put the following:

You can now rename this pipeline to App Build CI by clicking Edit → Three dots → Triggers → YAML and editing the Name field.

This build specification is responsible to install, build and test the App, this pipeline generates the www artifact whenever it is successfully executed, you can see a example of the artifact generated here, this artifact includes assets, styles and scripts that have been compiled and will be used to build the .apk file in the next step.

Finally, to generate the .apk file, it is necessary to create another pipeline with the name Android App CI, and put the following content:

Before running this pipeline it is necessary to generate the keystore file on your local machine using the following command that comes with the JDK:

Then put in Library → Secure File which can be found in the Pipelines menu. 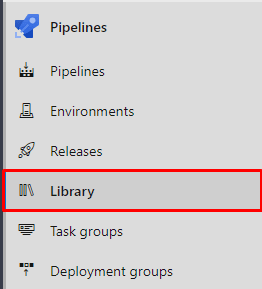 Now you can run and see the result, whenever you run the Android App CI pipeline, another App Build CI will triggered and the generated artifact will be downloaded to generate the .apk file. You can find more information about yaml structure in the official Microsoft YAML reference..

The last pipeline is responsible for deploying the App to the Visual Studio App Center, So to do that you need to first create an app in the App Center and then a new release pipeline in Azure DevOps. 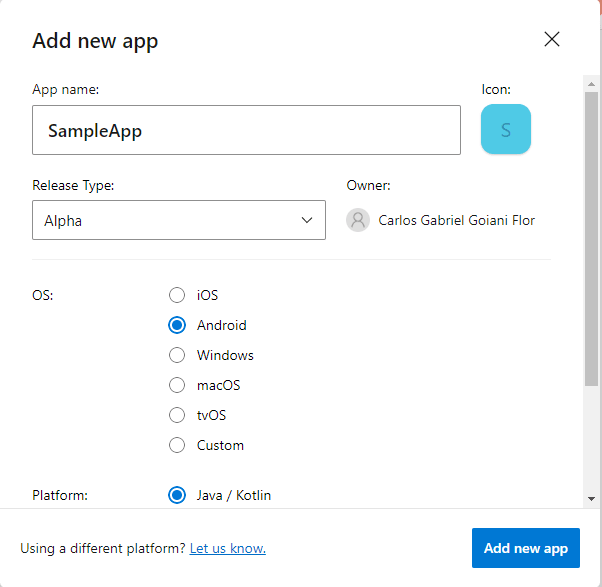 You'll need to use this API token to configure the automatic deployment of the App.

Log in to Azure DevOps and navigate to Pipelines → Releases 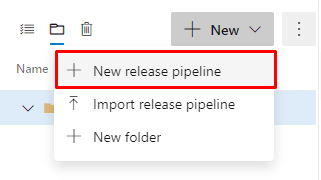 The pipeline configuration should appear to add stages and artifacts. 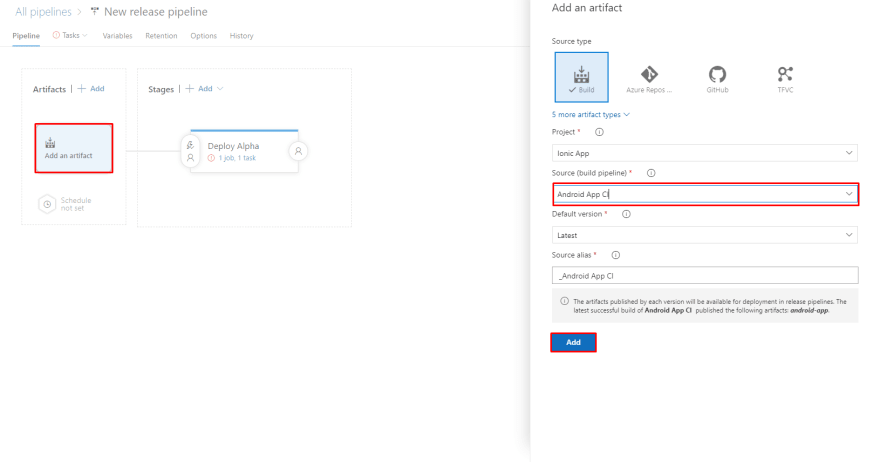 Add a new stage by clicking on Add a stage box and select Empty Job because it is not necessary to use any templates, next change the stage name to Deploy Alpha for example, now it is necessary to add the deploy task for this click on Tasks 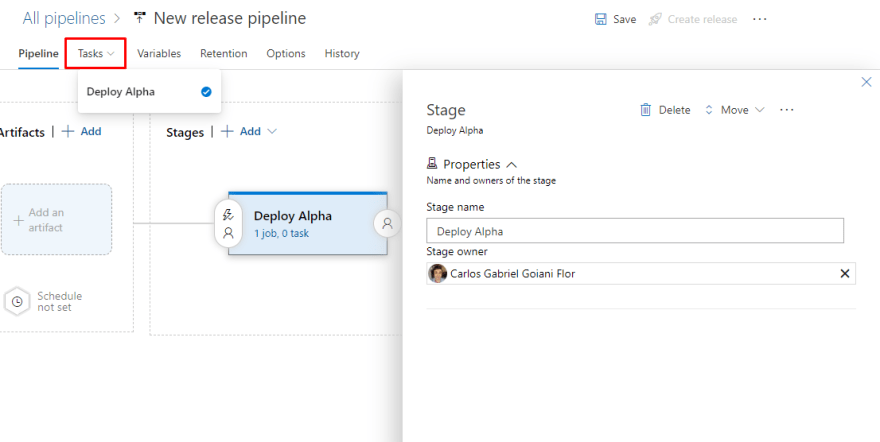 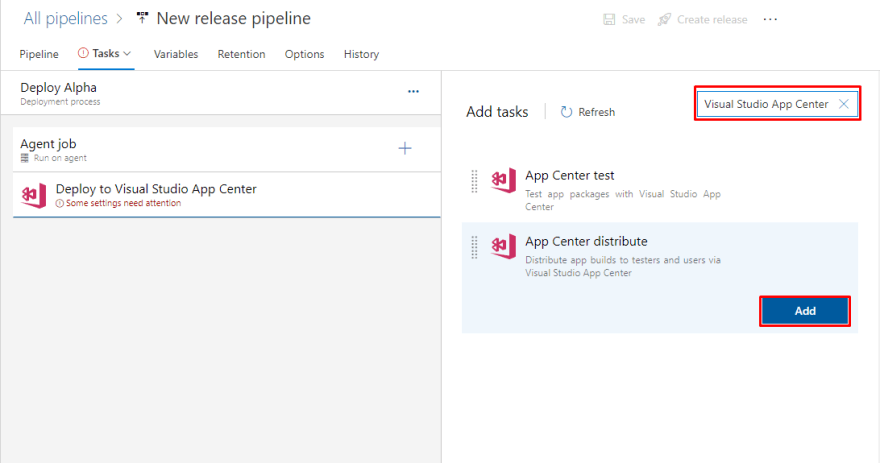 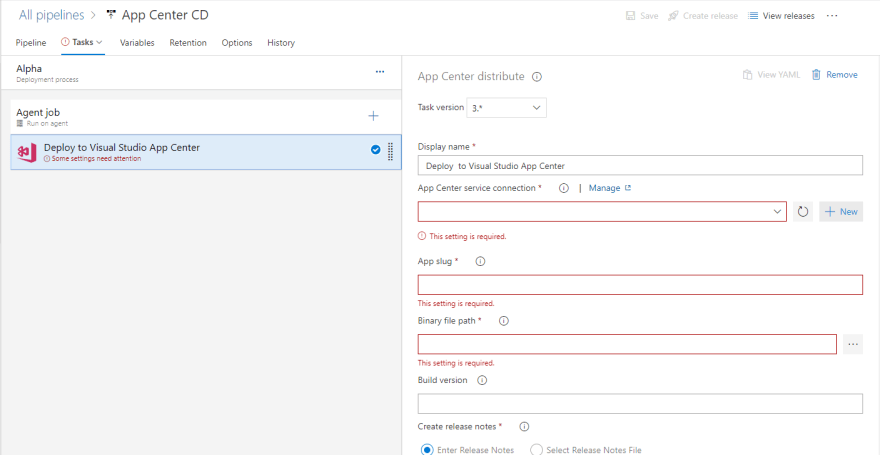 After that for everything to work well you must fill in the fields of the task, below i'll explain how to fill each of them.

Relative path from the repo root to the APK/AAB or IPA file you want to publish, in this case you need to select the artifact (.apk file) path generated by running Android App CI build (e.g. $(System.DefaultWorkingDirectory)/_Android App CI/android-app/app-release-unsigned.apk).

Release notes will be attached to the release and shown to testers on the installation page.

This field is very important because it is where you decide the destination that the release will be distributed, in the case if Groups is selected you can deploy it to one or more groups using commas or semicolons to separate multiple IDs, you can create these groups in the Visual Studio App Center navigating to your App → Distribute → Groups 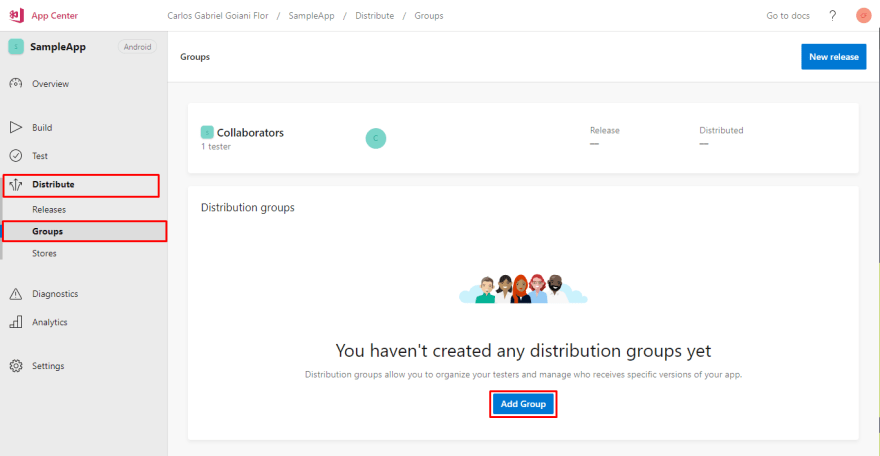 To get the ID, just select the group created and click on the settings icon 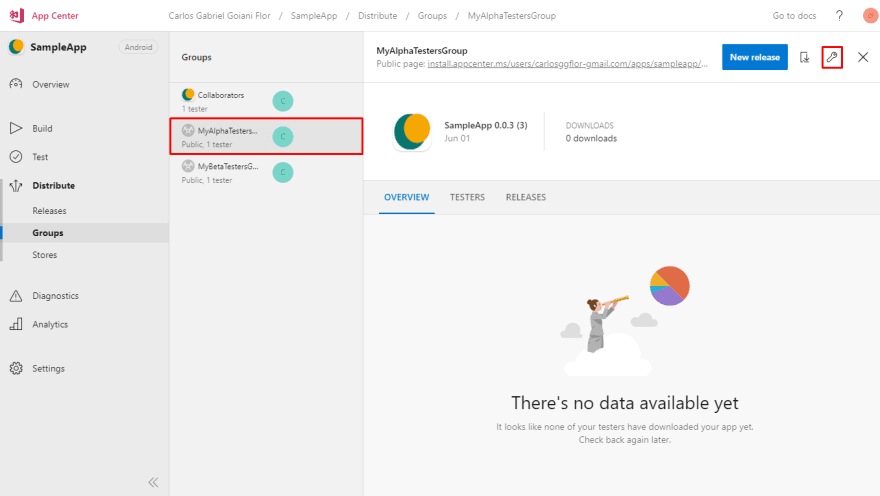 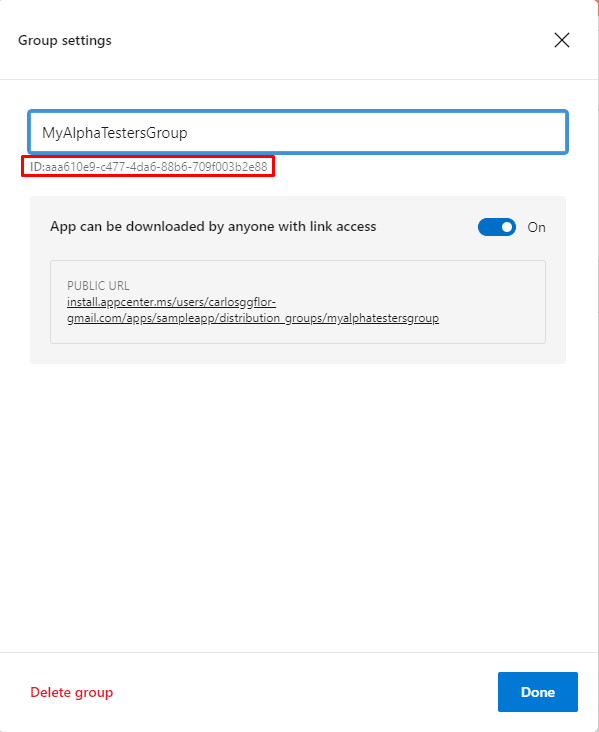 In case of you leave the Destination ID field empty, then the default group (Collaborators) is chosen.

Otherwise, if you select Store you need to enter the ID of distribution store to deploy, in our case we didn't create the store connection (e.g. Google play or Intune Company Portal), but if you want to create enter Visual Studio App Center navigating to your App → Distribute → Stores → Connect to store and follow the steps.

Finally you can rename your pipeline and run clicking on Create release → Create.

After the deployment as finished you can see the release in the Visual Studio App Center → Distribute → Releases, the image below mark the main information about this page.

1 - The App version, you can change that version by editing the config.xml file in the source code.

2 - The destination chosen in the deployment task for the App Center.

From here you can distribute the same release to other groups and stores (Google Play or Intune), set up testers and generate links to download the App.

We created an hybrid application using ionic with cordova and Azure DevOps to integrated with Github to keep the code and created CI/CD pipelines to test, build and deploy our App in the Visual Studio App Center. We can change any part related to Azure DevOps like the CI/CD tool and still use it as an intermediary. We went through a detailed explanation of each step of the build and the deployment stage.

I didn't find a simple example of this, so if you don't want to install Android Studio or are using Linux and need to configure the tools in PATH, see below

Without permission to trigger another build in the Android App CI pipeline. 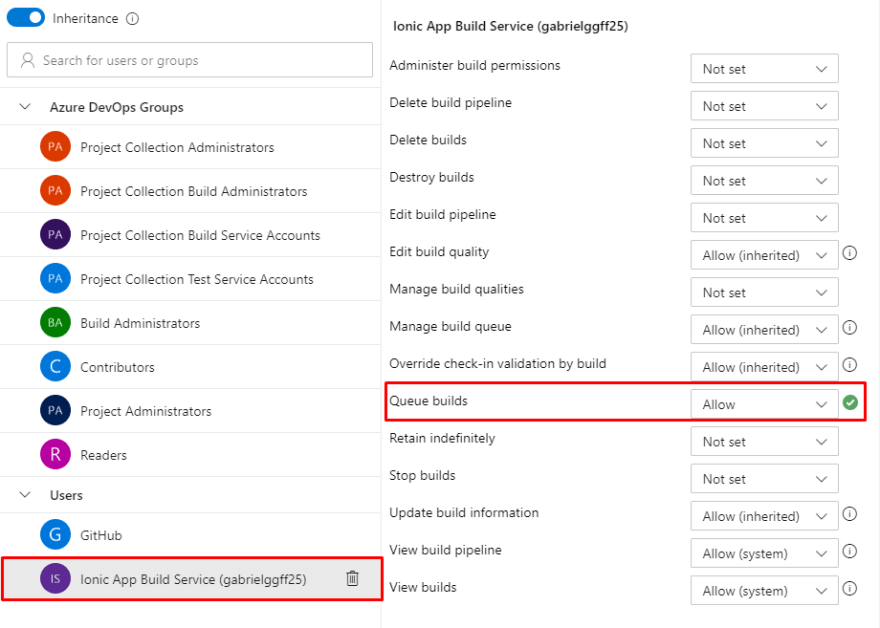 The problem occurs during the build of the App for android, see Error while loading shared libraries

Problem with chromedriver version on agent

Maybe the current version of chromedriver is new to Google Chrome installed on the agent, see installed softwares on ubuntu machines

Link Work Items to Deployments in Azure DevOps Release Pipelines: ALL you NEED to know

Once suspended, carlosgit2016 will not be able to comment or publish posts until their suspension is removed.

Once unsuspended, carlosgit2016 will be able to comment and publish posts again.

Once unpublished, all posts by carlosgit2016 will become hidden and only accessible to themselves.

If carlosgit2016 is not suspended, they can still re-publish their posts from their dashboard.

Once unpublished, this post will become invisible to the public and only accessible to Carlos Gabriel Goiani Flor.

Thanks for keeping DEV Community 👩‍💻👨‍💻 safe. Here is what you can do to flag carlosgit2016:

Unflagging carlosgit2016 will restore default visibility to their posts.