For this weekend's first backend project, I thought I'd make a useful API. From one of my previous articles, you can see that my simple site accepts hex codes - what if it could accept color names like darkorchid or peru?

My immediate thought was a colors API! I did searching, but no luck. What I did find, though, was this URl:
http://www.html-color-names.com/darkorchid.php

Oooh 👀. Do you see that? There's darkorchid in the URL name! I fiddled with the URL, and it turns out

But, I wanted a site that could get both color names AND hex codes. Turns out, I was asking for too much - my favorite site colorhexa has hex codes in its url, like https://www.colorhexa.com/8acaff

Great! Looks like I can make my own API now. Here's my basic structure:

I have some previous experience with web scraping - I used tools like axios and cheerio before.
Axios downloads the entire HTML page for you to manipulate, and cheerio is like jQuery for the backend - it allows you to manipulate and get elements with CSS selectors like .class and #id.

Anyway, before we start building the Node app, let's check out the HTML code behind these two sites.

On html-color-names, I ran into an issue: 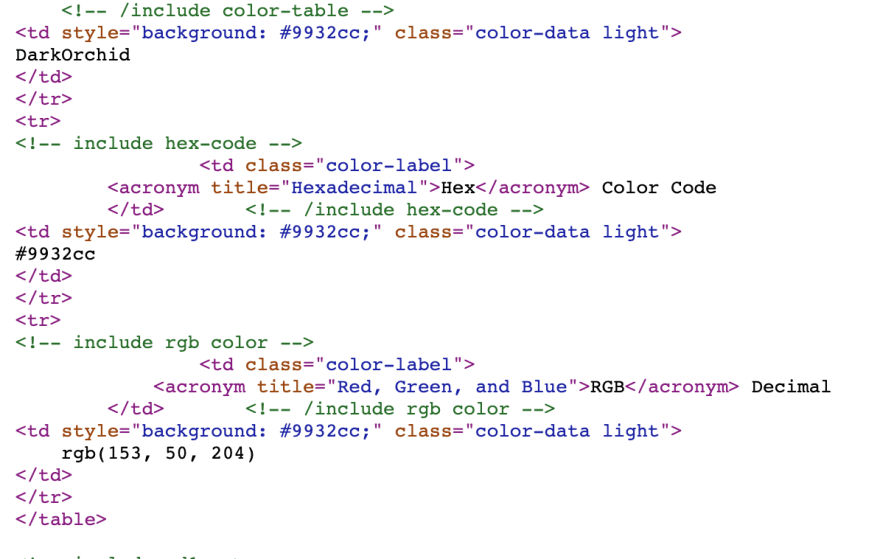 Hmmm.... I assumed that the RGB, hex code and name would have different IDs.

Anyways, I wrote a few lines to make sure the only elements with class="color-data light" were the ones with the color info.

Whew 😅. I'll work this into my API later.

Next is colorhexa. As it turns out, their site organization is much more complex than html-color-names: 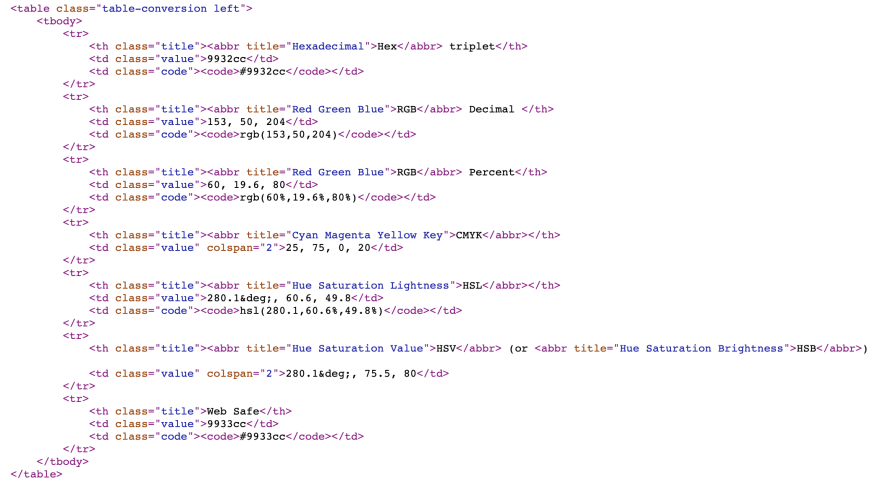 A quick read seems to show that all the numbers are inside of class="value" elements... 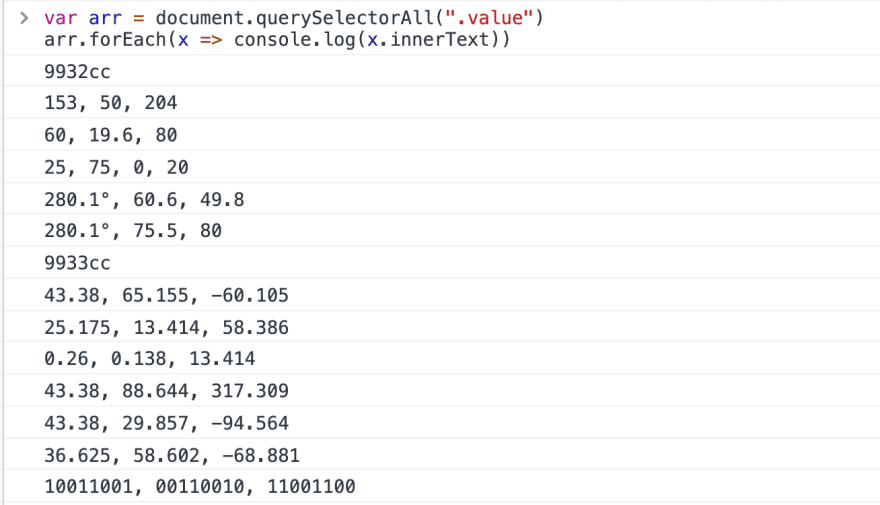 Anyways, one good thing is that the colorhexa data pattern is consistent - arr[1] is always the RGB value.

Now, on to the backend coding. We can use axios to fetch the site, and then use cheerio to parse the HTML and get what we want.

So first, we're going to do something like this:

We can't start parsing out HTML yet - this is the axios output: 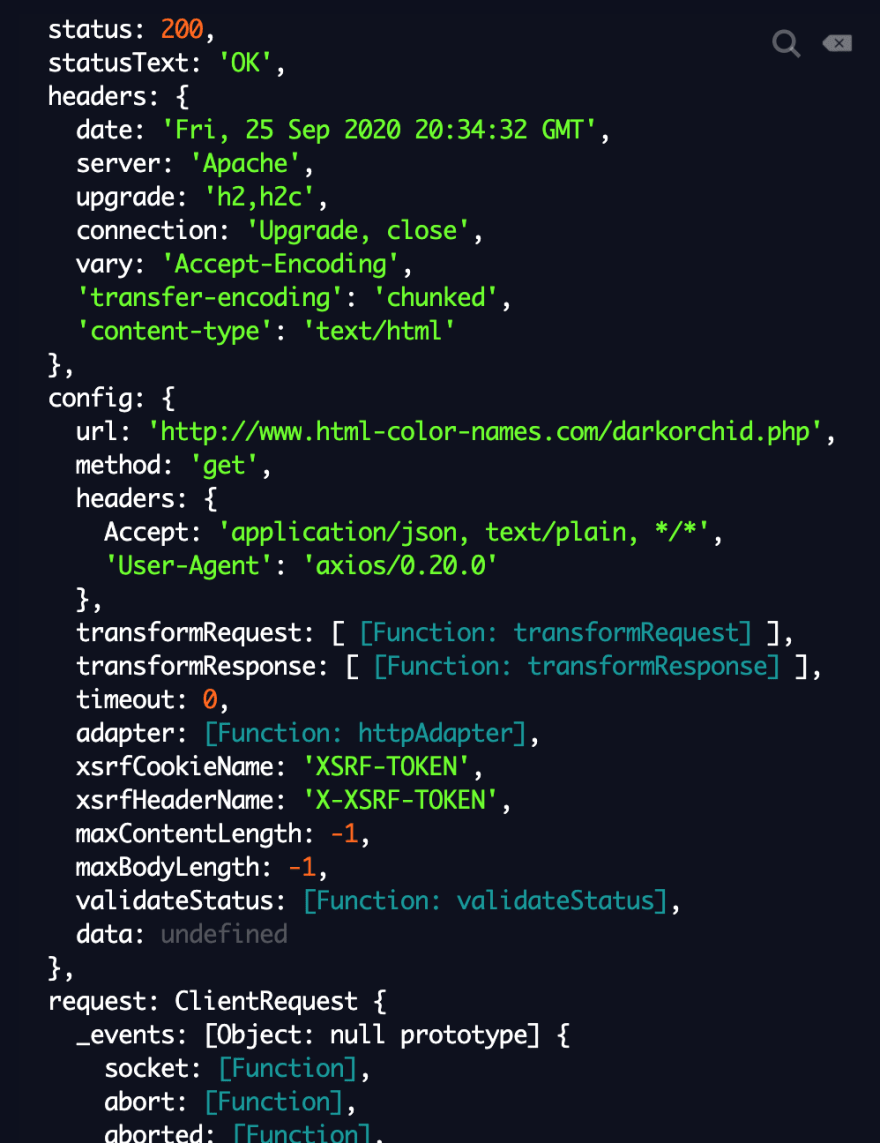 Whoaaa, what? I expected a plain-text response, but its actually an object! We need to look for the HTML part, which is actually html.data. 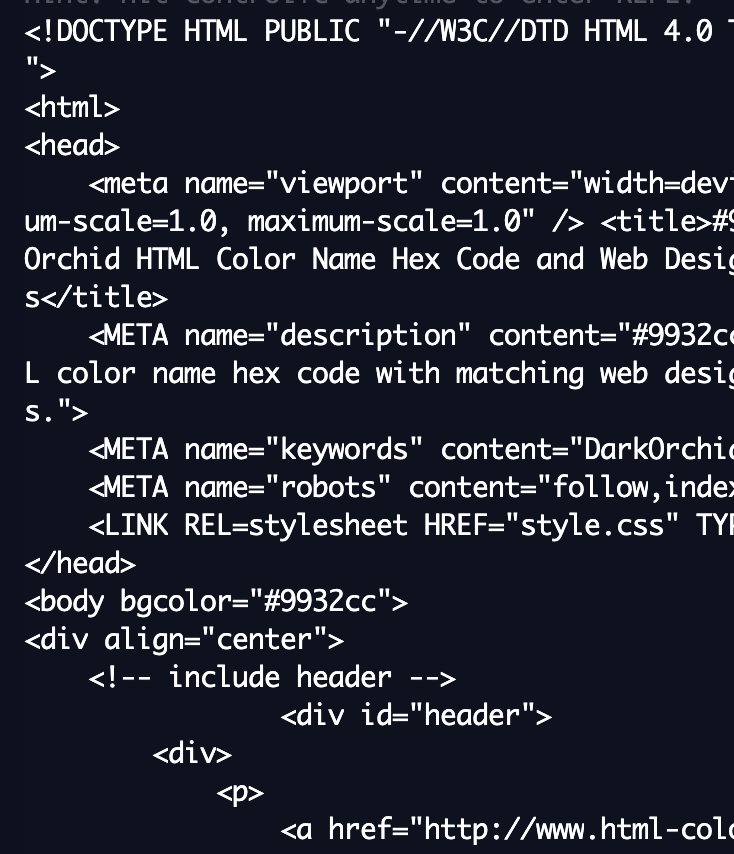 Cool! Now we get HTML plain text. Now, we're going to look at this through our cheerio-tinted lenses:

However, I found an error - arr returns a large object. I tried using arr.text(), but it returned a string. arr.toArray() results in an array. What to do?

After that I tried:

Whoa! It worked! I got this as the input:

Whoa! It worked! It seems like arrow functions don't work in Cheerio. And because we're smart developers who don't copy and paste, let's figure out how it works:

Getting info from colorhexa is going to be pretty similar; I selected .value, iterated over it, and then got out a result.

The second position [1] is the RGB value.

Yay! Looks like I can get the values now.

Ok, now we need to parse our results. As you remember from the html-color-names array, each string in the array is like
'\n\t\tDarkOrchid\n\t\t'
What I'm going to do (and what would be smart) would be to write a quick regex matching \n or \t, replace them with spaces, and then use .trim() to strip the spaces.

But, because each string has exactly six characters behind and in front (\n\t\t), I could also slice (6, str.length() - 6). That would be the fast and hacky way to do it.

But I have all weekend! I'll write a regex. At first, I tried writing \\n and \\t, but, as it turns out \n and \t are legal regex statements - so my code became like this:

Anyway, I did end up spending close to an hour debugging this, but my code was much cleaner and simpler.

As for colorhexa, I really only wanted the RGB, so:
a[1].
Yes, that's it. The RGB values are in the second slot in the array, and arrays start from 0, so its 1. Perfect! We can get the color info from the URLs.

Now, let's get on with the actual API part.

First, you should be familiar with NodeJS and Express and stuff like this:

At this point, I ran into another roadblock. Variables declared inside of the axios.get() functions can't be used outside - so I have to put both of them inside the same path.

So, I came up with this:

And for those who aren't familiar with the colons, using things like :color allows you to get part of the path using req.params.color.

Basically, I would pass the color parameter into the functions I wrote previously, and then send the results.

That wraps up the first part of my API! Check out the next article to see how I split up the code and set up the validation.

Everything You Need Know About New World Coins