Fond of Cloud, Open Source and new technologies, Aristide leads the implementation of security controls on Catawiki’s Auction platform. In this publication he describes the historical technical considerations that applied to his personal website architecture built on AWS since its creation in 2016 to today.

Back in 2016, I used to work as a Django developer, and as such, after starting working on AWS, I decided to host a personal website as a Django blog on AWS Elastic beanstalk.
The blog was extremely minimalistic and configured to use two small AWS VMs, one for the application and another one for a Postgres database hosted in a private subnet. It also involved an S3 bucket to load some static content such as images.

While this approach was convenient to start getting familiar with AWS and leveraging several of their based infrastructure services (VPC, CloudWatch, S3, RDS, Route53 ...), it had many drawbacks, such as:

A bit later in 2017, I started hearing about these magic websites that could be built almost instantly using a static site generator and found that S3 could be configured to host them in one click. Therefore, I’ve benchmarked the two most popular solutions at that time, the Ruby engine Jekyll and the Go version called Hugo. As you can deduct it from this post’s title, I’ve gone for the second one as it was lighter and faster to build.

With a static website, I wasn’t required any longer to keep a dedicated database to host my blog posts, users and their comments. Instead, I’ve chosen to rely on external SaaS services such as Disqus for comments and Algolia for searching. Both solutions allow generous free-tiers usage for non-commercial use.

As serving content outside AWS is expensive, I’ve also added a Cloudfront distribution in front of the S3 bucket and was able to add a Lambda@Edge function in my website’s HTTP request responses2. Lambda@Edge allowed me to add additional security to my website, such as preventing serving content from a non-explicitly allowed domain with a Content-Security-Policy (CSP) HTTP header. I also actively monitor the messages returned by these security headers through the excellent monitoring platform Report-URI from Scott Helm. The website architecture, therefore, was simplified as shown below:

This structure is much cheaper and more scalable and can serve thousands of users for less than €5 per month.

A remaining caveat was that it was difficult to restrict access to the S3 website from the CloudFront3 service only. As described here, the usual AWS best practice of setting an Origin Access Identity (OAI) is incompatible with S3 website endpoints. The only workaround is to set a hardcoded “password” in an HTTP header supported as a condition in the S3 bucket policy. In addition, you need a few additional resources to get an automated CI/CD deployment from a Git repository (AWS CodePipeline) or some monitoring and alerting (Cloudwatch Alarms).

AWS Amplify was initially a response from AWS to the popular simple web app hosting solution Firebase from Google4. It designates a toolset integrating many AWS services (CI/CD, Authentication, CDN, hosting, monitoring ...) in a single place.

Let’s see how it works. First you create a new hosting and choose the appropriate versioning service where the Hugo website skeleton is stored, in my case GitHub: 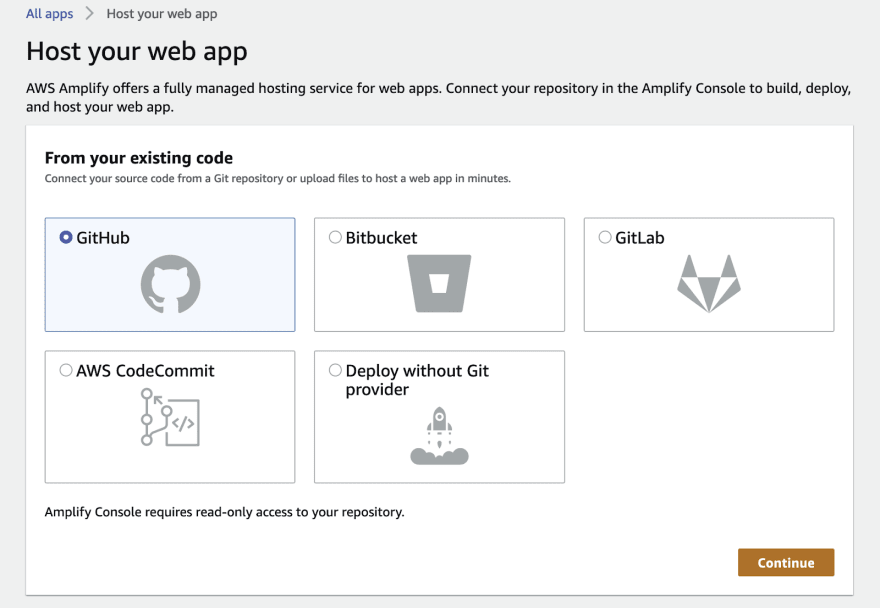 Then Amplify will automatically detect what framework it should use to build the project and propose an appropriate build configuration. Furthermore, in the advanced setting, you can configure Amplify build to use a custom docker image stored in ECR (Elastic Container Registry) and environment variables. 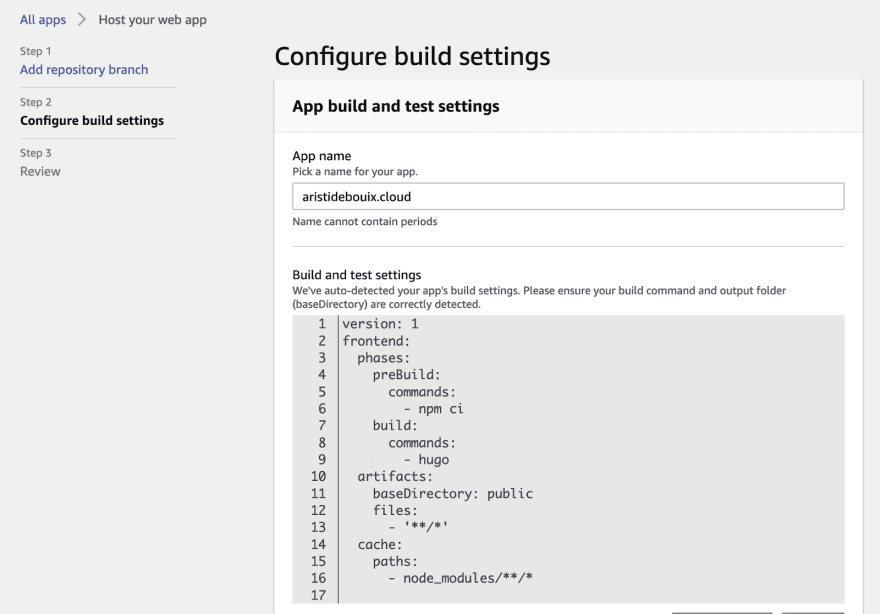 And voila! The website is now live on an amplifyapp.com provided URL.

Another powerful feature of Amplify is that you can easily host different versions of your project based on different Git branches; this enables you to run a testing version of a new feature before rolling it out to your main website. However, you may not want to expose this staging branch to the outside world. The good news is that AWS Amplify permits to effortlessly set a Basic Authentication in front of any website’s version. The less good news is that for an AWS managed service, I would also have expected the possibility to log in a user based on their AWS IAM identity.

As I already own a Route53 hosted zone, let’s change the default amplifyapp.com provided URL to my usual custom domain5. This will create a new CloudFront distribution with a free wildcard SSL certificate for your root domain and subdomains. 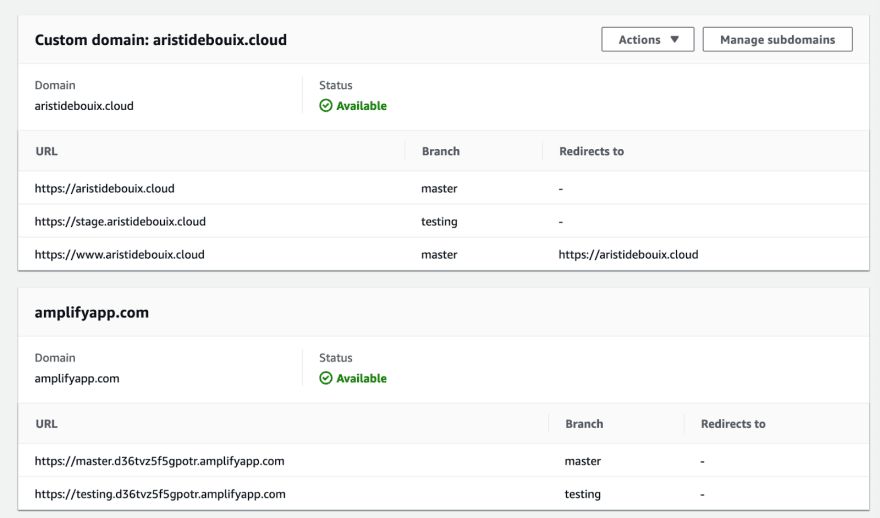 If you follow this step, you may find that the console only redirects the root domain to the www subdomain during creation. For further redirection options, there is an additional 'Rewrites and redirects' menu that you can configure as follow.

The rationale in this configuration is that by default AWS Amplify Redirect unknown URLs to the main page, so if you wish to show your own ‘404 not found page’ , it is better to advertise it as a ‘404 (Rewrite)’ instead of a ‘404 (Redirect)’.

Also, for SEO, it is better to replace the default ‘302 (Redirect - Temporary)’ HTTP return code to ‘301 (Redirect - Permanent)’. A 302 return code may confuse Search Engines that will continue to reference the wrong URL, as the redirection is supposed to be temporary, ending up slowing the initial loading time of visitors coming from the wrong URL.
Personally, I highly recommend choosing either your root or www subdomain and redirecting all other site references to it. Indeed, Search Engines tend to get confused when they’re getting the same page at different URLs. Do the same for the HTTP version of your site to HTTPS as you enjoy a free AWS managed SSL certificate, that will also decrease your domain spread.

The last screenshot is for the custom header editor that I’ve particularly enjoyed, there you can define your site HTTP headers in a yaml format6. It is much more convenient than maintaining a lambda@Edge function. My only catch on this menu concerns the editor that I find quite basic. So I copy paste the code and edit it in a separate editor. 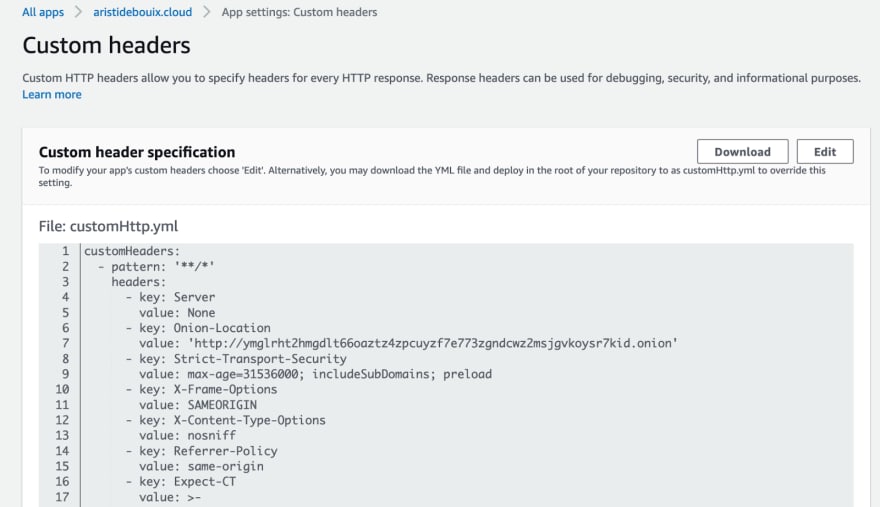 There are a few additional power user functionalities that I don’t use for my relatively simple personal blog, so I won’t detail them here. These advanced functionalities include an Admin UI to configure team access to a serverless backend, direct CloudWatch monitoring and Alarm integration, and Pull Request system to merge changes between different branches and the master.

This study wouldn’t be exhaustive without a full pricing comparison between the AWS Amplify and a custom Cloudfront+S3+Lambda integration. I will simplify it a little, since I’ve configured CloudFront, my S3 costs were very low, and Lambda@Edge costs have remained within the Lambda Free Tiers. Below is a breakdown of the different potential costs:

One of the strengths of AWS Amplify is that costs are fixed for any region you operate in. This can prove more beneficial in certain geographic areas such as Asia Pacific, Australia or South America, where outbound traffic varies between $0.11 to $0.12.7

Here is a more literal comparison based on my website costs for July 2021:

By using AWS Amplify, I got the same features for a third of the price while saving me from maintaining the underlying service components. This result is biased by the cost of keeping one running pipeline and relatively low traffic during summer.

AWS Amplify is a managed service shipped with CloudFront, S3, CloudWatch, CodePipeline, Cognito, API Gateway and even a serverless backend. Therefore, it perfectly fits smaller size projects based on static websites or frontend oriented frameworks such as React, Vue or Next.js.

While using AWS Amplify is convenient, if you operate a high Annual Rate Return service with more than 500k users, I would consider it more profitable to spend the additional Engineering effort to finely configure the corresponding underlying services8. My conclusion to this blogpost is that, no matter how great a managed service such as Amplify, the Return On Investment decreases as consumption goes up. Therefore, the main target audience of AWS Amplify is individual developers to medium-sized applicative projects.

Deployment of PostgreSQL RDS and its Replica through Stack

Become a Catawikian
The Future Of Software Engineering: Is Low-Code The Answer? [Infographic]
#programming #webdev #lowcode #productivity
Who or what are you grateful for in tech?
#discuss
What was your win this week?
#discuss #weeklyretro

Once unpublished, this post will become invisible to the public and only accessible to Aristide Bouix.

Thanks for keeping DEV Community 👩‍💻👨‍💻 safe. Here is what you can do to flag catawiki:

Unflagging catawiki will restore default visibility to their posts.