MacOS command line tools can be handy for automating tasks and they're also a great way to have more fun with Swift, so here's how to set one up: 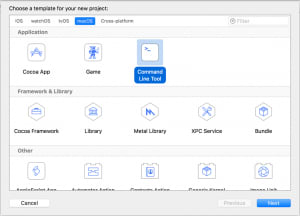 2) Give your app a name, and make sure Swift is selected as the Language 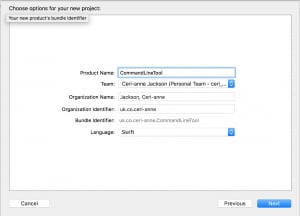 3) Click Next and choose where to save your project.

You now have an Xcode command line project! The main.swift file is where Xcode will look to run your code, similar to the main function in Java or C# or the AppDelegate in iOS. There will be a “Hello World” print statement there already.

Under Products there is an executable file called CommandLineTool which is red. This is the executable file created when we build the project. from the command line. It’s red because we haven’t built it yet 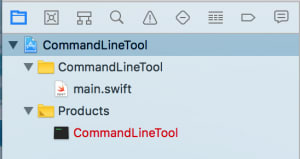 4) Build and run the project. The CommandLineTool product will now change to black and the following output should display in the output window

Running from the Command Line

1) In File Inspector (⌥⌘1), check where the CommandLineTool Product is being saved. It will be a long location ending in /Build/Products/Debug/CommandLineTool

3) Try going into Xcode and changing the program slightly, for example:

4) Build in Xcode (don’t miss this step out otherwise the executable won't update). There’s no need to run in Xcode - just build ( ⌘ B ).

5) Go back to terminal and re-run to see if it works:

This location isn't very convenient to to run our tool from so we can move it to somewhere better.

7) In Xcode, go to the CommandLineTool target and Build Phase and add a new Run Script Phase

This will copy the executable when we build our project and paste it in our bin folder.

1) We can pass arguments in to our program when we run it from the command line. We just need to add a space and then the arguments. Let's pass in a name:

We're not doing anything with this argument so nothing different happens.

2) Update main.swift to print out any arguments we pass in:

3) Build and run from the command line, passing in arguments separated by spaces

Note that the first argument is the program name, and the arguments we passed in are 2nd and 3rd. Also, all arguments are strings.

5) Run again and you'll see each argument printed out

1) To add an argument in Xcode, click on Edit Scheme 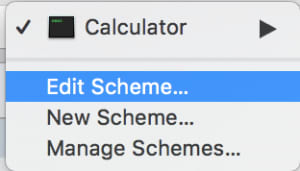 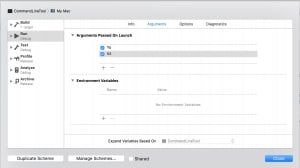 And that's it! Now you can develop as much Swift code as you like as normal. Just kick it all off in main.swift. Happy Swifting :)

The code for this project is on Github: https://github.com/Ceri-anne/CommandLineTool

This article was first published on my blog here:
https://ceri-anne.co.uk/how-to-make-a-command-line-macos-tool-in-xcode

Switching apps slows down my productivity (and how I fixed it)

Once suspended, ceri_anne_dev will not be able to comment or publish posts until their suspension is removed.

Once unsuspended, ceri_anne_dev will be able to comment and publish posts again.

Once unpublished, all posts by ceri_anne_dev will become hidden and only accessible to themselves.

If ceri_anne_dev is not suspended, they can still re-publish their posts from their dashboard.

Once unpublished, this post will become invisible to the public and only accessible to Ceri-anne.

Thanks for keeping DEV Community 👩‍💻👨‍💻 safe. Here is what you can do to flag ceri_anne_dev:

Unflagging ceri_anne_dev will restore default visibility to their posts.