In this tutorial we are touching some more commands and aspects about Git.

Let's modify a file in your directory.
echo hey >> file1.txt
When you run git status it gives quiet a lot of information. But you can have summary status by simply using the command,
git status -s

As you can see in the above screen shot we have a red 'M' as we have done modifications which have yet not in the staging area.
Let's add file1 to the staging area and get the git status.

Now you can see the green 'M'.
Now let's change file1 again and get the status.
echo there >> file1.txt
git status -s

To check what we have in the staging area you can use the command,
git diff --staged 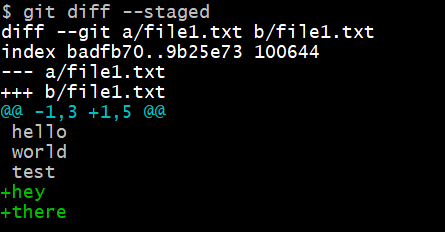 The output I got is shown in the above screen shot.
Here we are comparing the a/fil1.txt with b/file1.txt. In other words, we are comparing two copies of file1.txt. The oldest copy is a/file1.txt. So the changes in the old copy is stated in a minus (-) sing while plus (+) sign indicates the changes of the new file. The 7th line gives us an idea on what parts of our code has changed. The part with minus sign as a prefix tells about the old copy. Hence according to my screen shot, in old copy starting from line 1, 3 lines have been extracted and shown in the terminal ( check the lines hello, world, and test in the terminal). In the new copy starting from line 1, 5 lines have been extracted. With lines hello, world, and test two more words hey and there have been added to the new copy. That is why they are green and has + as a prefix.

When VSCode is open it will display two copies (old and new) of the file that we have changed.

Now it is much easier to check and compare the changes.

For us to view the history of our repository we can use the command git log. 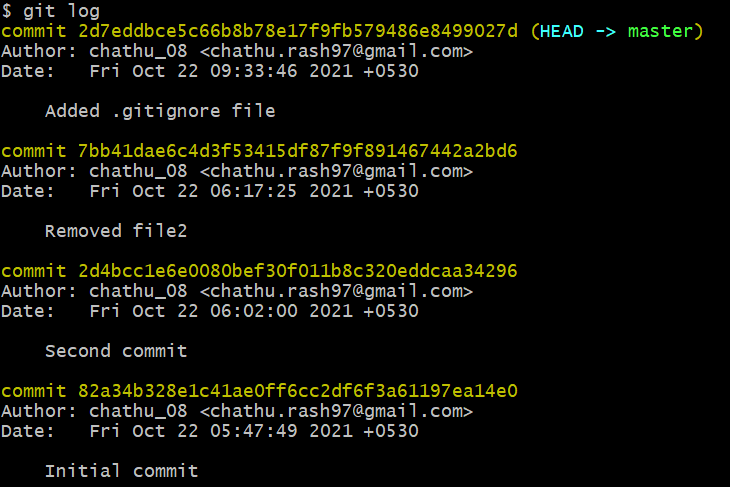 It displays our commits from latest to the earliest. Each commit has a unit identifier. And each commit segment displays its author, the date of commit, and your commit message. If you feels like this is too informative, you can only view commit id and message with the code git log --oneline

You can also reverse the commit order and have the initial commit at top using the command, git log --oneline --reverse.

To check what we have changed in a given commit we can use the command show by specifying the commit you want. There are two ways to specify commits;

git show 2d7eddb
Here you need not to write complete id. You can specify first few characters of the id if there is no other id that starts with those same characters.

How can you revert a commit that you have done? You should undo the add command. Hence you need to use the command,
git restore --staged fileName.extention
Now file you have specified in the above command is now not in staging area.

To discard local changes you can use a similar command like the one above,
git restore fileName.ext

Now you went through three tutorials about Git. So did you get it??? 😉

Thanks for keeping DEV Community 👩‍💻👨‍💻 safe. Here is what you can do to flag chathurashmini: