A big part of Checkly runs on AWS Lambda, but I never really discussed it in depth before on this blog. So here we go.

Note, I'm using "Lambda" here as a stand in for "serverless" in general. Many of the things discussed here apply to either Google Cloud Functions, Azure Functions and possibly Zeit although I've never used it.

First something on how we use Lambda. Last week we went over 35 million check runs. All check runs for Checkly are on Lambda and have been for at least the last 12 months or so.

We even have a vanity metrics section on the Checkly homepage that's updated pretty much live.

And this is just a sub set of all Lambda runs, as we have some other plumbing stuff running on Lambda too.

More data on our Lambda setup:

More vanity metrics. These are the amount of invocations for the three core functions and the one (busiest) plumbing function over the last three months, in total roughly 21 million invocations.

Note that the invocations are directly tied to how often Checkly allows you to run checks: every minute for API checks, every 5/10 minutes for browser checks. 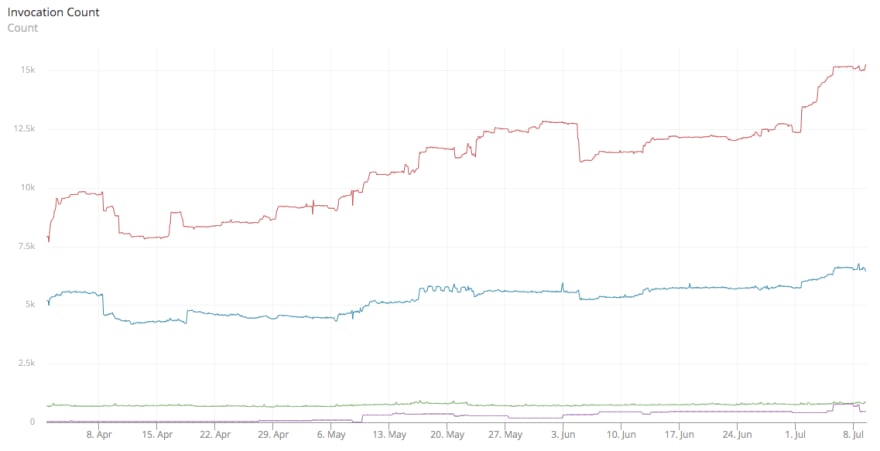 You get it now. We use Lambda at at least some sort of scale. Onwards.

We ran the browser checks on VM's with Docker before. Read this older blog post on how the VM/Docker solution worked.

Lambda is a great fit for early, bootstrapped SaaS companies for these three reasons. At least they were for me:

So, nothing new there. This is the marketing blurb for any serverless solution. But it is 100% true in my experience. Good job marketing!

To deploy a Lambda function, you can upload a .zip file with your code to S3 or directly to Lambda. I wouldn't recommend that. You will end up writing massive amounts of bash scripts to filter, sort and error check all kinds of things.

At the other end of the spectrum, there are frameworks like Serverless which are a big, complex and try to do everything. Expect lots of YAML engineering and basically leaky abstractions over the different serverless providers. Some love it. I hate it.

I chose Node-Lambda, a Node.js specific toolchain somewhere in between just using the AWS SDK directly and the sprawling jungle of Serverless. Here's why it works for me and for Checkly

The only thing missing really was a "build once & deploy multi region" option. But that's just a couple of lines of bash.

Lambda is extremely well suited for background jobs. Here's why

Here's a diagram of how the Checkly setup works.

Notice how extremely decoupled this setup is. It is liberating to be able to swap out components, restart or redeploy parts without work "getting lost".

If you use Checkly or even Puppeteer Sandbox you'll notice that the UI has a button to run HTTP requests or Puppeteer scripts in an interactive fashion. This is very useful for debugging your checks, like the example below where a Puppeteer script has an error.

These "ad hoc check runs" as we call them should be executed on exactly the same code base and infrastructure as the non-interactive scheduled checks.

For this to work we do two things:

Monitoring and logging on AWS Lambda is not top notch, but admittedly it is getting better. What are the issues?

For now, I use AppOptics. For under $30 per month it ingests all my relevant Cloudwatch, Heroku and custom metrics and allows me to build custom dashboards. 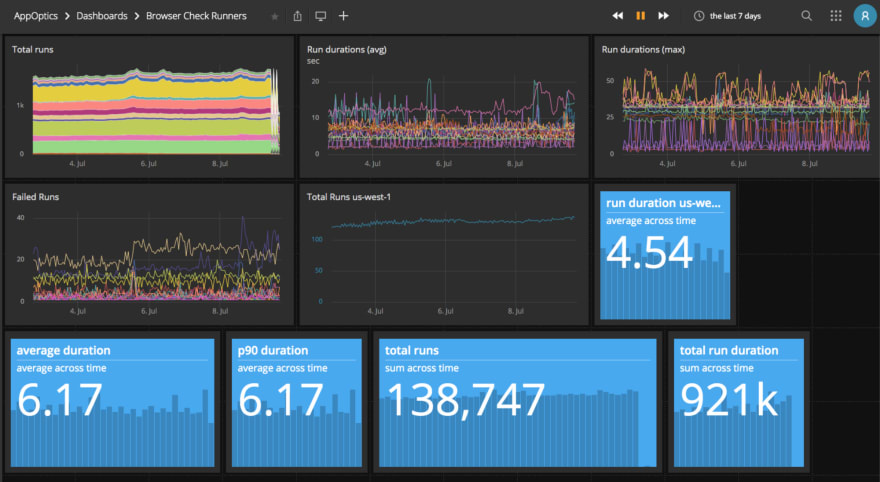 Blog site API with Authentication in Node, Express and MongoDB

My DBA to DevOPS Journey...