The Recyclodroid is an advanced robotic device that uses image recognition as it moves around to determine if objects in its path are recyclable. Not only does the robot have an environmentally-friendly mission, it’s also made out of recycled materials. Basically, you’re looking at a real-life Wall-E!

Climate change is real, despite what non-scientists would have us believe. That’s why the Recyclodroid is on a mission to help the environment, one recyclable at a time. The Recyclodroid is a robot that can identify recyclable objects in its path as it navigates the world. It’s made up of a USB webcam mounted on a robotic car built from household materials like toothpicks, Gatorade caps, and a broken calculator case. The webcam captures video of its surroundings and uses the Clarifai API to “see whether the object in its path is recyclable or not. 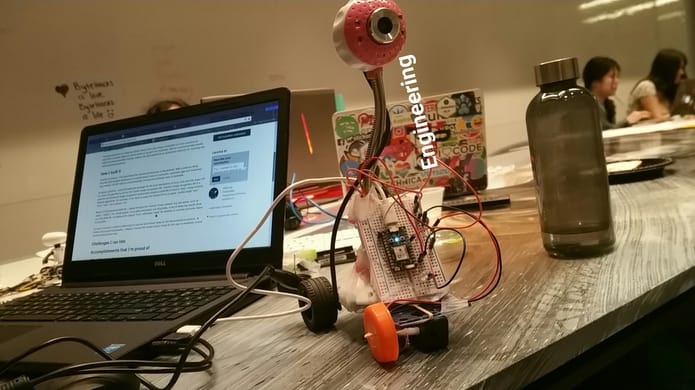 We’ve got a soft spot for fellow do-gooders, so the environmentally-friendly mission of the Recylodroid was right up our alley. We also love it when developers use Clarifai’s software with their own hardware, and bonus points to the Recyclodroid for being made of common household items! Try it out – here’s Recyclodroid’s GitHub repo!

HOW YOU DO IT

We caught up with Alice Lai, a rising senior at High Technology High School who loves robotics, hardware hacking, and using technology for social good, to talk about her inspiration for Recyclodroid.

Clarifai: What inspired your idea for Recyclodroid?

Alice: I was trying to come up with an idea for my project for the ByteHacks hackathon and I had brought with me a DIY robotic car I had made out of household materials. I started to play around with ideas and thought it would be cool to make it a self-driving car through computer vision. Another hacker commented that it was super cool that I was reusing household materials to create my project, and that gave me the idea to make a robotic car focused on recycling and environmental sustainability.

How did you build the app?

Recyclodroid is a robotic car built out of household materials (i.e. toothpicks, Gatorade caps, broken plastic case of a calculator) with a focus on recycling. A USB webcam is mounted on this robot, which then uses the Clarifai API to “see whether the object in front of it is recyclable or not based on a long array of things that are recyclable.

I used the Javascript client for the Clarifai API to program the computer vision aspect of my project. I also used the Photon hardware development kit to control the movement of the robotic car (to move forward based on if the object was recyclable or not) and wrote a shell script to automate the process.

What was the best part about working with the Clarifai API?

The Clarifai API was super easy to use and it was really nice how all the tags/concepts that the image recognition outputted came in a large JSON file.

Thanks for sharing, Alice!

To learn more, check out our documentation and sign-up for a free Clarifai account to start using our API – all it takes is three lines of code to get up and running! We’re super excited to share all the cool things built by our developer community, so don’t forget to tweet @Clarifai to show us your apps.

And give Alice some props in the comments below. Until next time!

My experience with ChatGPT

How open sources tool can help you to secure your website api?

Once suspended, clarifai will not be able to comment or publish posts until their suspension is removed.

Once unsuspended, clarifai will be able to comment and publish posts again.

Once unpublished, all posts by clarifai will become hidden and only accessible to themselves.

If clarifai is not suspended, they can still re-publish their posts from their dashboard.

Once unpublished, this post will become invisible to the public and only accessible to Clarifai Team.

Thanks for keeping DEV Community 👩‍💻👨‍💻 safe. Here is what you can do to flag clarifai:

Unflagging clarifai will restore default visibility to their posts.