Last Thursday, May 7th, 2020, was the first time I spoke in front of an audience about software development topics. The talk was titled: “Blazor Web- & Mobile Development using C#“.

Yes, I know what you maybe think: This guy has 80+ blog posts, runs a YouTube channel, etc. But yes, it was the first time I spoke live in front of an audience.

I was invited to speak about Blazor at a local Mobile user group. Because of the current situation with social distancing in place, the organizers decided to move the event online. It was my chance to show some of my knowledge in front of their audience – live on Twitch.

How I got invited

It was a few months ago that a friend of mine asked the organizer of the Mobile user group if he wanted to invite me to speak about Blazor.

It was my friend who knew me and my YouTube channel and knew about my interest in Blazor. He is a co-worker of one of the organizers of the user group.

Only a few days later, I received an offer to speak at the next meeting of the Mobile user group. As we all know, 2020 has its indistinguishable storybook, and things changed in the meantime. So the event was held online.

How I prepared myself

I did the usual things somebody planning a presentation would do. I created a slide deck and started thinking about what code samples I should show, and I debated what parts I wanted to code live.

It took me a lot of time to build an application that shows everything I wanted. In the end, I dodged this project and started from scratch. I created small projects from scratch while giving the presentation.

There were questions about more complex applications, but I believe the simple projects helped a lot of the audience understand the fundamentals of Blazor.

Telling everybody about the fundamentals of Blazor was the goal of my talk anyway.

What I have learned

I don’t like presenting in front of people I don’t know. If it is a smaller group of people that I mostly know and trust, it is no problem for me to go on and on about a technical topic and discuss for hours about solutions.

Every time I was forced to give a presentation, it turned out to be okayish or even pretty good. I never had a terrible experience, but it is just something that I don’t like doing. But this time, it was fun, and I learned a lot from the questions of the audience.

I like the format. I enjoy how I was able to help people understand the fundamentals of something new from my home office while they were having dinner, watching me in their homes.

It was a lot of help that I was able to give my first user group talk in my native language. I’m still worried a lot when I think about speaking in English.

I am very grateful for the opportunity I got to give my first user group presentation for this audience. I want to thank everyone involved in the organization of the event and everyone who attended the event from their couch.

I might think about streaming more on my Twitch channel in the future. It was a lot of fun, and maybe people tune in again? We’ll see how things turn out.

How I streamed to Twitch

The talk was streamed on Twitch. I used OBS to capture my screen and to add overlays. I used multiple scenes to make it a unique experience for the audience. It took me a long time to create different layouts, and in the end, I ended up only using three out of the four created scenes.

At the beginning of the talk, there was an introduction from the organizers. To bring them onto the stream, I opened a Skype call, and I recorded their webcam as well as share their screens. It worked quite well. The audio was clear; the video sometimes lagged a bit. But for an introduction, it worked well enough.

After the introduction, I started with the main part of the meeting, my talk. I did not have the opportunity to see the reaction on the faces of the people in front of me, but I encouraged them to use the Twitch chat to interact with me. And they did.

Only a few minutes in, people started asking questions, and it was a fun experience to talk in front of my camera.

After the presentation, I asked people to join a Discord server that I created specifically for this talk. Around ten people jumped into the server, and we talked about 30 minutes about the presentation.

After my talk, I checked the Twitch statistics of my presentation. It turned out that, on average, 31 viewers were watching the stream with a peak of 37. There were 72 unique viewers over 70 minutes of my talk. 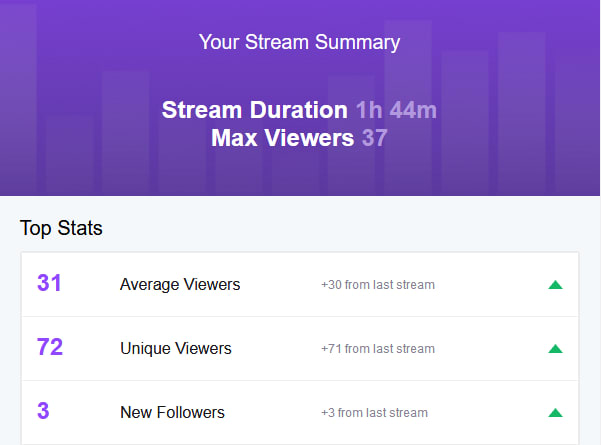 Those numbers might not sound impressive to you. Maybe you talked in front of a much bigger audience? But for me, it was a lot. Taking into consideration that the Mobile user group usually attracts about 10-15 attendees, we had at least doubled the audience for this event.

It leads me to the conclusion that developers tend to prefer online events over offline events. I’m not sure what the reason is. Maybe it is the lack of alternatives in times when you are supposed to sit at home? Anyway, it was a great audience to give my very first talk.

What I would do differently

My first user group talk was a great experience, and I overcame my fear of presenting in front of a group of talented, well-educated, and experienced developers.

It was around two weeks before I had the presentation that I finally started creating my slide deck and started working on the source code I wanted to show. It put more pressure on my shoulders than required.

Also, I underestimated the effort it takes to create beautiful scenes for OBS. I wanted to use my color scheme and my logos. It was a lot more work than expected. I would have started earlier if I could go back in time.

Other than that, I am delighted with how everything turned out.

What you can learn from my experience

It doesn’t matter if you cannot attend events in person. If you have a decent setup, streaming from home is an option.

If you are scared of giving your first presentation, I can tell you that you don’t need to be afraid of it. Local user groups tend to have a very forgiving audience. Also, the size of the audience is usually not too big.

If you are the organizer of a user group, don’t cancel all the upcoming events. Try to get them online. People will show up, and they’ll have a good time and learn something new anyway.

This article was originally published on claudiobernasconi.ch on May 10th, 2020.