What is GitLab CI/CD

GitLab CI/CD is a tool that is built into GitLab. It allows you to create automated tasks that you can use to form a Continuous Integration and Continuous Delivery / Deployment process.

You configure GitLab CI/CD by adding a yaml file (called .gitlab-ci.yml) to your source repository. This file creates a pipeline, which will then run when a code change is pushed to the repository. Pipelines are made up of a series of stages, and each stage can each contain a number of jobs or scripts. The GitLab Runner agent will then run these jobs.

For an on-premise instance of GitLab, you can install the GitLab runner agent on your own instances, and it supports many different operating systems (thereby creating your own fleet of instances to run your pipelines). But to keep things simple in the following examples, we will use gitlab.com and the default hosted GitLab runner environments provided.

Why use Cloudsmith with Gitlab CI/CD

So why would you want to use Cloudsmith with your Gitlab CI/CD pipelines? Well, there are a few reasons:

That’s not all. With features like custom domain support, configurable upstream proxying and caching, configurable edge caching rules, download logs/statistics and more, Cloudsmith aims to provide the best solution for all your package management needs. It really is the ideal tool in a high-velocity CI/CD workflow – precisely the type of workflow that GitLab CI/CD is intended to enable you to create.

Let’s work through an example.

OK, so let’s get started with a worked example. The very first thing you will need is some source code in a GitLab repository that you want to build. For this example, we will build Ruby source code into a Ruby Gem package.

Our project on GitLab has the following structure:

The important thing here, as previously mentioned, is the .gitlab-ci.yml file. This is where we define the GitLab CI/CD pipeline that will run when we push a change to the GitLab repo.

Let’s take a look at the .gitlab-ci.yml file:

The first thing we have specified is the image that will be used when creating the Docker container for the GitLab runner that will execute this pipeline, in this case, Ruby 2.5.

Next, we add an environment variable, RUBYGEMS_HOST. This is where we define the URL of the Cloudsmith package repository that we will push the result of the build to.

We then define two stages in this pipeline, the build stage and the push stage.

This stage is pretty straightforward. We just run the gem build command to build our Ruby source as defined in our cloudsmith-ruby-example.gemspec file. Following this, we have defined an artifact job, as we need to temporarily store the output of the build so that the push stage next can use it.

This is because different stages in a pipeline will run on a new runner instance, so a subsequent stage wouldn’t have the access to the package built in a previous stage. You could also perform any jobs required to build and push within the same stage, and therefore on the same runner to avoid this, but for more complex pipelines you’ll likely have many stages.

The push stage is a little bit more complex. This is due to the fact that we are going to push our package to a private Cloudsmith repo, which requires authentication. The Ruby package manager, gem, allows you to store your authentication credentials (in our case, the Cloudsmith API Key) in a credentials file, located at ~/.gem/credentials – But of course, we don’t want to check this credentials file into our GitLab repository along with our source!

So we can make use of GitLab's ability to add variables to the source code repository. We can create a file variable called CLOUDSMITH_API_KEY, and then as part of the push step, we add a job to move this variable into the required location before we run the gem push command.

You add this file variable in your GitLab repository settings:

Now, when our push step runs, the mkdir and mv jobs will create the required ~/.gem/credentials file (with our Cloudsmith API Key in it), and all without exposing our API Key in any logs on the runner instance, nor checked in with our source code.

The final job in our push step simply runs gem push to upload the package we have built to our private Cloudsmith repo, as Cloudsmith repositories offer full native support for the gem package manager.

All that is left to do is for us to make a change to our source, and then commit and push the change to our Gitlab repo. Let’s see what happens when we do that.

We make a change, commit it and push:

The Gitlab CI/CD pipeline starts, and the build stage executes: 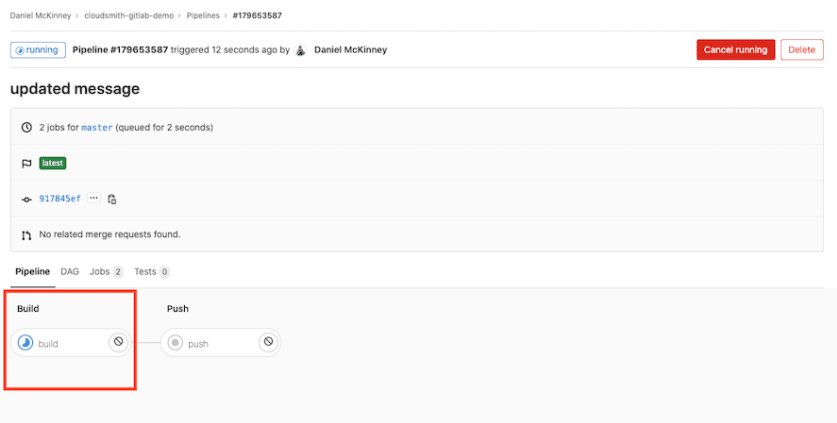 The build stage runs gem build to build the package and then stores it in GitLab’s temporary artifact storage: 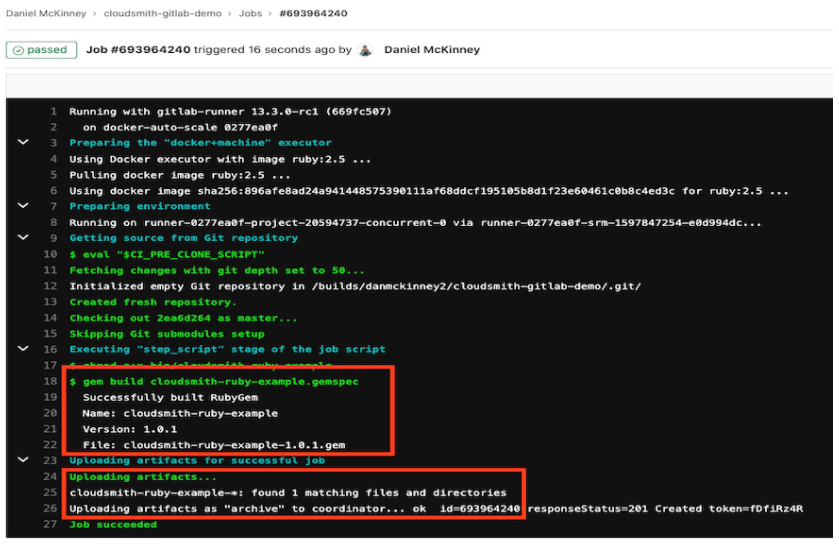 The Push stage then starts to execute once the Build stage completes: 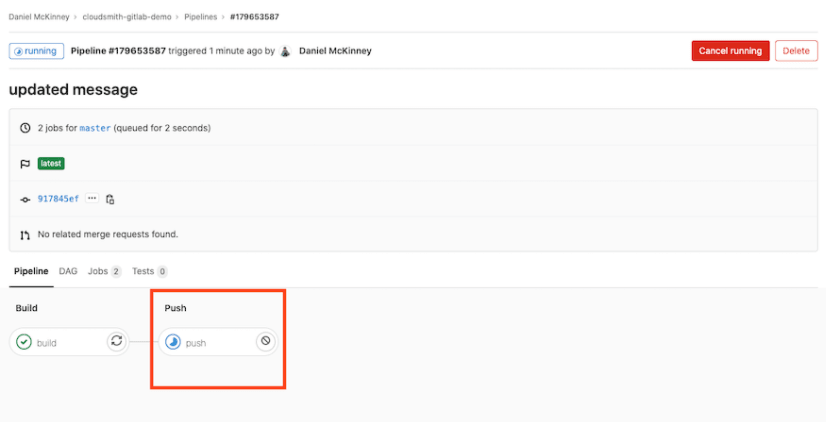 The push stage downloads the package from the temporary artifact storage, creates the required ~/gem/credentials file, and runs gem push which uploads the package to our private Cloudsmith repository:

And that’s it, the pipeline is now complete and reports as "Passed":

If we now go and login to Cloudsmith, and check our "examples-repo" repository, we can see that the Ruby gem we just built is present: 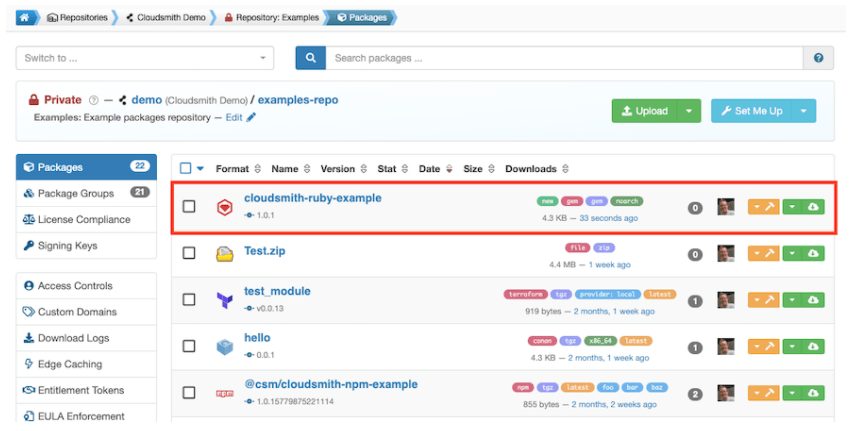 Automated Semantic Versions for all projects with semantic-release and Gitlab CI!

Deploy Laravel to AWS Beanstalk with GitLab CI (including testing, and staging/production branches)

Cloudsmith
Level up your DevOps!

Cloudsmith is a "moonbase" for low-gravity deployments and rocket-speed distribution of packages and containers. 🚀

Get a private, secure and ultra-fast repository in 60 seconds.

Start Free Trial
Track your Bandwidth & Storage limits with our Quota API
#cloudsmith #quotas
Caching and Upstream Proxying for RedHat Packages
#cloudsmith #proxying #caching
Did We Lose Something With The Adoption Of Containers? And Can We Get It Back?
#cloudsmith #containers